Will Bakkt Beat Libra to the Punch?

Next Article: Bulls Jumping the Gun, Bitcoin Price Not Bullish Yet at $9,400: Analyst

Writing to you this evening from the Cosmopolitan hotel in fabulous Las Vegas. Here in town for the Litecoin summit and it’s really going great so far.

Met a lot of interesting and awesome people today and there were a lot of talented speakers but the highlight for me was seeing former Congressman Ron Paul this morning saying that the US government should give up their monopoly on money and that the central bank system should be abolished.

Not sure if I believe in all of that but it was certainly surreal to see the packed conference hall giving him a stand-up ovation and to think that he was actually elected on this platform once upon a time.

As the global economic landscape continues to sway cashless, the ability to own your own wealth and to choose your own form of money seems like a right that everyone who believes in freedom and capitalism should relate to.

Please note: All data, figures & graphs are valid as of October 29th. All trading carries risk. Please only risk what you can afford to lose.

Stocks have become a bit boring of late. A few indices are toying with their all-time highest levels but volumes are pretty light right now.

With that said, the FX market hasn’t been all that volatile lately either. In fact, despite all the injections we’ve seen since the Repo ordeal 6 weeks ago, the US Dollar is remarkably stable.

In this graph, we can see a very steady upward channel that’s been in play for the better part of this year. Notice how the support we’ve just bounced off (bottom yellow line) coincides well with the 200 day moving average (blue).

Prime Minister Johnson lost his third vote for an early election yesterday. The motion was shot down in Parliament leaving us all to wonder what the most likely next steps will be.

Dozens of earning’s reports will be released in the US market. So far half of the companies in the S&P 500 have done a beautiful job undershooting their earnings estimates by a solid 2%.

But of course, the market has something else on its collective mind today as the US Federal Reserve seems set to cut their interest rates yet again tomorrow afternoon.

The post Xi pump seems to be fading now but the after-effects are still apparent. Volumes are still strong but have paired back a bit since the day of the announcement but the market sentiment seems to be gradually improving.

Here we can see the fear and greed index over the last three months. Notice the last two dots ending up higher. 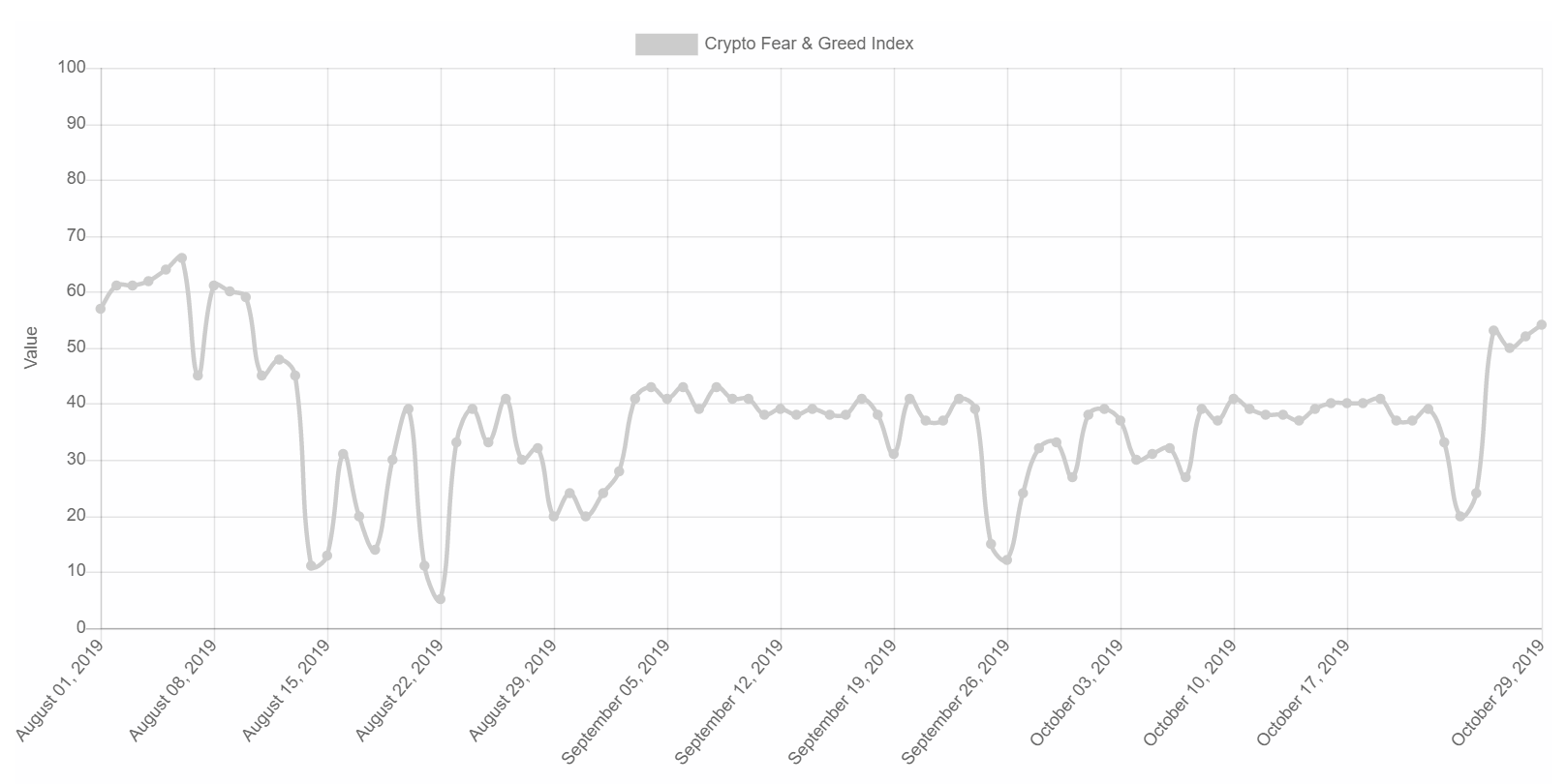 Bakkt and CME futures contracts have been performing consistently well these last few days but what seems more relevant is the volumes on bitcoin’s blockchain itself, which are once again over a daily average of $1 billion.

While the Asian market still seems pretty excited about Xi, it’s pretty clear that American traders don’t necessarily see China as a champion of the crypto industry. Google Trends shows that the term Blockchain is searched consistently more often than the name of the Chinese President.

What could end up exciting them however, is a new product from Bakkt that was officially announced yesterday which will focus on consumer accounts and payments.

From where I see it, the vision of Bakkt to make crypto more accessible to US consumers is not far off from what the Libra project is all about. Of course, the implementations are different but the ideas are quite similar.

The main difference is that while Libra has been shaking hands and testifying at the Congressional level, Bakkt has been calmly and confidentially communicating directly with the people who’s approval is actually required for these types of projects.

With that in mind, there’s a real possibility that Bakkt could beat Libra to the punch.

Will Bakkt Beat Libra to the Punch? was last modified: October 31st, 2019 by Guest Author