Here’s a life pro tip for you. It just popped up on my Reddit frontpage yesterday and I felt like sharing….

Apparently the “academics” originally published this paper the first time last year but it was promptly debunked. It seems that now the authors have added a few details, finally received a peer review, and are ready to release the updated paper shortly.

Let me just say for the record, there is no methodology on the planet that will convince me that this narrative is accurate. The simple matter is that I personally witnessed the 2017 rally, as did many of you, and it wasn’t anything that could possibly have been caused by any single whale.

In those few months, millions of verified retail accounts were opened here at eToro in order to trade crypto and it was the same throughout all exchanges, many of which had to stop accepting new clients because they simply couldn’t keep up. Servers crashed under the weight of the sheer traffic and the attention in the media was overwhelming.

It was a matter of unabashed enthusiasm for tens of millions of people around the world. I’d not seen such mass excitement surrounding an emerging industry since the birth of the internet. Now you want to tell me that the entire rally was the result of a single whale?!

Get out of here with that!

Please note: All data, figures & graphs are valid as of November 4th. All trading carries risk. Only risk capital you can afford to lose.

The rate of acceleration does seem to be increasing as we go and the overall level has about doubled over the last decade. This is certainly a cause for alarm for some economists but as for myself, I’ve found that it usually pays to be an optimist.

The Dollar amount here seems a bit arbitrary and even the rate of acceleration might not be a pressing issue as long as the main holders of the debt decide to hold onto it long term. Some have aptly pointed out the strong desire for China, Russia, and the European Union to de-dollarize their economies and so might be motivated to dump US debt.

However, the numbers tell us a different story. As of this publication, more than 70% of US debt is actually owned by the United States, the Federal Reserve, and US investors. 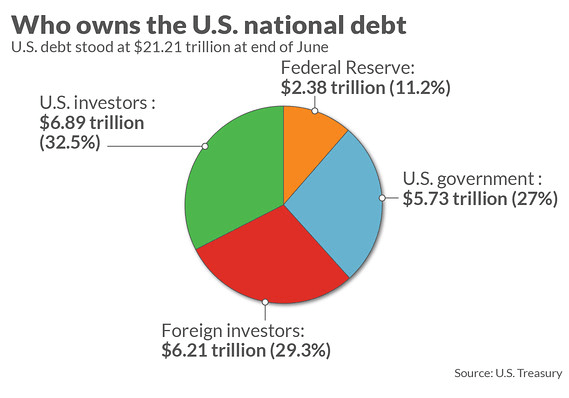 Less than 6% of all US debt is owned by China, virtually nothing is held by Russia, and the combined holdings of the EU member states probably couldn’t do very much physical damage by the numbers.

Now, that’s not to say that the economy is not about to go into a recession because it seems likely it will, nor am I claiming that there is no possibility of a catastrophe because there is. All I’m saying is that the probability of such outcomes has not been altered in any way due to this particular seemingly gruesome landmark.

At 8:30 this evening in Berlin the new President will give her first public speech as leader of the European Central Bank. Though it might feel like it, it’s definitely not Ms. Christine Lagard’s first time in the spotlight. In fact, she’s no stranger to public appearances or large financial institutions.

After leading the International Monetary Fund for the last 8 years and before that serving as the Minister of the French Economy for 4 years, she was practically chosen for her experience… and connections.

Her predecessor has set the Eurozone on a path of central bank induced stimulus but it’s very likely that Christine will urge European governments to take a more proactive role rather than leaving all the work to the ECB. It is a difficult case to make considering the 2012 debt crisis is still fresh in people’s minds and most officials are hesitant to take on more of it.

What I’ll be listening for is any mention of blockchain and Central Bank Digital Currencies. With China set to release its own digital Yuan sometime next year, it seems the race is on. We also know that Christine has personally advocated for such solutions and is even considered to be a fan of projects like JPM coin and XRP.

In any case, it’s always fun to watch someone who’s recently risen to a level of high power to see how they plan on using it.

It’s the strangest thing to see that the entire Xi pump that we saw less than two weeks ago has somewhat dissipated, at least among cryptotraders. Yes, the price is still hovering near the highs and bitcoin is doing an incredible job of sustaining $9,000.

However, the volumes from cryptotraders seem to have vanished and across the top 10 crypto exchanges, are even lower than they were before the announcement. The CME group’s volumes have also dropped below previous norms, and Bitmex volumes continue to decline as well, a sign that trading activity is tapering off.

The good news though is that actual bitcoin activity, besides just ‘trading’ seems to be growing lately. Here we can see that the estimated level of transactions on the bitcoin blockchain has risen back to its former glory and after a bit of a dip in October is now back to an average of about $1.3 billion per day.

This is incredibly encouraging but what’s even neater is the steady increase in volumes at Bakkt. Check this chart to see how they’ve come from nothing to something in a short time. 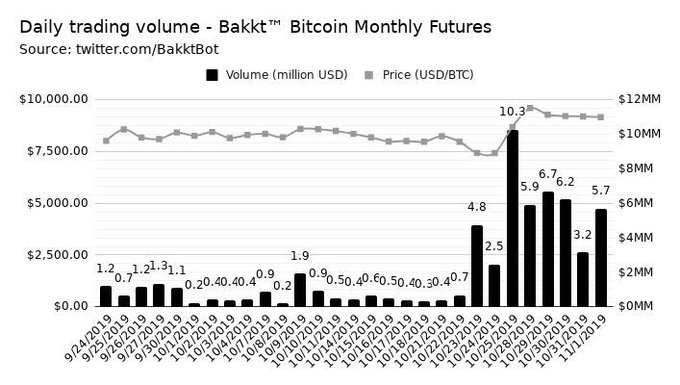 I wanted to apologize for not sending out a report last Friday. Unfortunately, I ended up losing more than a day in transit after missing a tight connection. I was able to update about this on Twitter so thanks for all those who wished me well at that time. I do appreciate it.

Let’s have a wonderful week ahead!