What Were the Catalysts that Shot Bitcoin Price 15% Higher?

Next Article: Why XRP And Other Top Crypto Assets Flatlined Against Bitcoin's 9% Move

Bitcoin (BTC) has been on an absolute tear over the past five or six days, with the cryptocurrency gaining some 23% from the $6,800 low put in last week. While many BTC investors have been extremely satisfied because of this move, with this marking the first notable bull rally in over two months, few know exactly what transpired to send Bitcoin higher.

A cryptocurrency industry executive who heads a market research and data firm recently broke down his thoughts on the rally to $8,400, weighing in on what he thinks brought digital assets dozens of percent higher than they were in the middle of December.

Per the comment from Goh, both Bitcoin and gold — up by 23% and 5%, respectively, in the past few days — have been supported “due to rising tensions between the U.S. and Iran.” 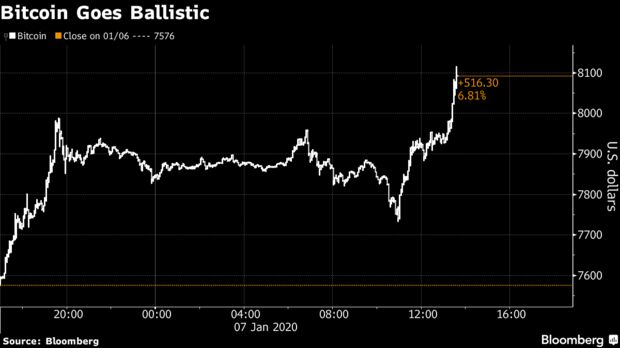 For those who missed the memo, late last week, the U.S. government revealed that it had killed Iranian General Qassem Soleimani in an airstrike, a move which President Trump claimed was to prevent any further attacks against Americans or the country’s allies. The conflicts have been growing since then, with Iran recently attacking a military base with U.S. troops stationed there and threatening more bases along with Israel and the UAE.

Global markets, including that of gold and Bitcoin, have seemingly responded to the news. Risk assets, such as U.S. equities, have slowed their uptrend higher, while risk-off assets, like gold, oil, and (seemingly) BTC, have posted strong gains.

Goh also attributed Bitcoin’s recent gains to the so-called January Effect, which is when “professional investors [come] back from the Christmas break and starting to deploy capital.”

Related Reading: Bitcoin is On the Brink of Going Parabolic; Here’s the Levels to Watch

What’s Next For Bitcoin Price?

With this in mind, what’s next for the Bitcoin price?

Although a consensus hasn’t been struck, the overall sentiment is leaning bullish for a confluence of reasons.

Per previous reports from NewsBTC, Bitcoin’s charts are printing bullish signs galore. For instance, the below chart, a weekly BTC chart, has printed a bullish Parabolic Stop and Reverse candle for the first time since the $14,000 candle in June of last year. Yes, the SAR has not confirmed, though it is an extremely strong sign for bulls should it close with the SAR indicator under the candle.

Also, according to Willy Woo, partner at cryptocurrency fund Adaptive Capital and a noted on-chain analyst, his indicators which track investor activity — correlated closely with market cycles — are showing clear signs that Bitcoin is decisively not in a bear market.

What Were the Catalysts that Shot Bitcoin Price 15% Higher? was last modified: January 8th, 2020 by Nick Chong

Read More
Tags:analysisbitcoinbloombergiran BitStarz Player Lands $2,459,124 Record Win! Could you be next big winner?
Next Post