Next Article: Bitcoin Above $10,200 Make Case For Larger Rally In Steep Short-Term Reversal

OKEx, the world’s largest cryptocurrency spot and derivatives exchange, has recently announced the launch of OKChain, an OKEx-owned commercial public blockchain and OKEx DEX, the first decentralized application based on OKChain. Adopting a Delegated Proof of Stake (DPOS) consensus mechanism, OKEx has issued OKT as native token of OKChain. The issuance of OKT will be on the genesis block and node block and is expected to increase by 1-5% every year. This marked a key milestone to OKEx, hence, created a push to the OKB ecosystem too. 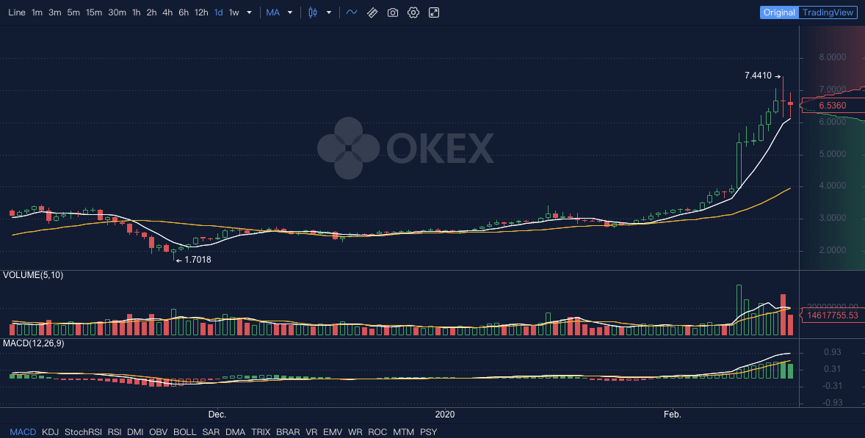 OKT, the native token of OKChain

OKT is the native token of OKChain, acting as the base token for OKChain Delegated Proof of Stake (DPoS) consensus mechanism. Same as native tokens of other DPoS public chains, OKT holder can participate in the election or voting of nodes, and the price of OKT is determined by the development of the public chain ecosystem, for instance DEX and other DeFi applications on it.

Therefore, OKT is an independent token but not a fork coin of OKB with different functions and different factors affecting their prices.

Co-existence of OKB and OKT

The core difference between OKB and OKT is the operating logic. The value of OKB reflected by the business performance of OKEx and the support of the OKB buy-back and burn scheme. OKB has already entered a deflation age after burning 700 million unissued OKB and promised never to issue additional OKB. Currently, the deflation model has become a major and important pillar of OKB’s price and an effective means of protecting the interests of users.

However, as a basic token of a native public chain which adopts a DPOS consensus mechanism, OKT is designed to fulfil the demand of OKChain for higher freedom in motivating international users to sustain its highly autonomous ecosystem. Hence, a continuous token issuance scheme and more flexible incentive mechanisms are needed, which runs counter to OKB’s idea of deflation. It implies the reason of issuing OKT as the native token of OKChain instead of OKB.

Market concerns OKT will lessen the value of OKB. In view of this, the price of OKB recently has spoken for itself clearly. Given the price pillars of two tokens are completely different, OKT actually can enhance the development of OKB ecosystem by inspiring the vitality of the applications and use cases based on OKChain. Market should take into account that the business performance of OKEx is an important factor to the price of OKB.

To sum up, OKT and OKB are fundamentally different, but mutually beneficial to each other.

Future moves to enhance the value of OKB

Since its issuance, OKB has achieved great success. As of now, there are already 11 internal and 32 external application use cases in the OKB ecosystem. In terms of trading channels, opened fiat gateways for 8 major currencies, including US dollar, Euro, Korean won, Indonesian rupiah, and Vietnamese dong. Besides, 13,978,364 OKB has been already bought-back and burned. According to the CoinMarketcap data, the ROI of OKB is as high as 322.29%.

“The past two years have been a non-stop exploration for us in value creation through OKB.  We have come a long way and are now extremely confident in our ability to drive value through OKB to our users, treating it as an essential foundation to our trading ecosystem and a bridge that connects OKEx to our valued users,” said Jay Hao, the CEO of OKEx in a recent open letter. “Creating sustainable value to our users has always been the priority at OKEx. When the hype lessens or we encounter a bear market, our team will be quietly building and improving on our platform. This year, developing the OKB ecosystem will be our top priority.” 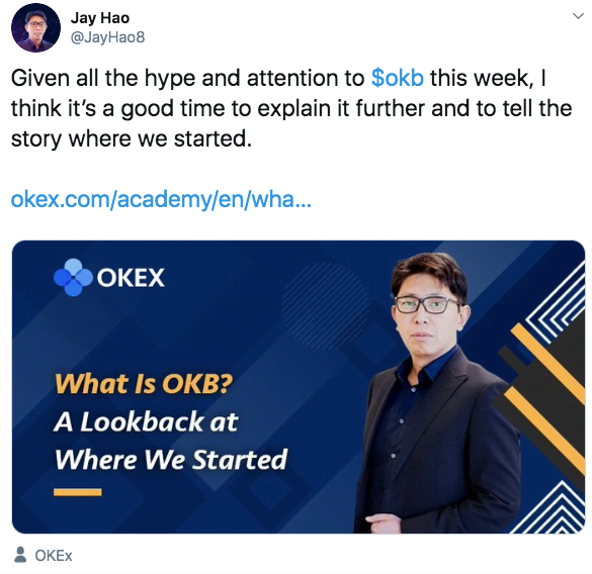