Next Article: Bitcoin’s “Insane” Funding Rate is a Grave Sign for the Crypto Market

Sorry bulls. On Tuesday, the cryptocurrency market continued to trend lower. XRP had it especially tough, posting the second-worst performance in the top ten digital assets of 6%, only underperforming Tezos.

While the asset is already down to $0.255, per data from CoinMarketCap — 25% lower than the ~$0.342 high seen just 10 or so days ago — a few analysts claim that XRP’s prospects are only looking harrowing from here, citing a number of technical analysis trends.

Trader il Capo of Crypto recently shared the below analysis, showing that he expects for XRP to retrace towards $0.15 from $0.25, a drop of 40%, in the coming weeks.

The analyst backed his prediction by pointing to a number of factors, namely that it failed to break above a descending trendline during last week’s rally and lacks macro support levels until prices around $0.15. 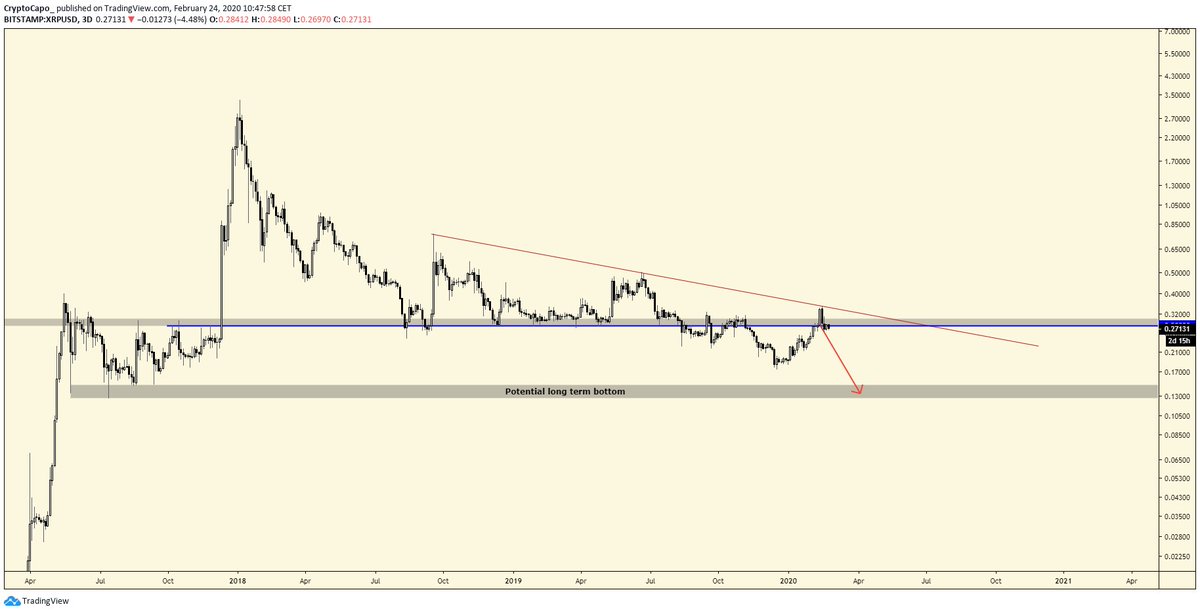 Also, a commentator that called XRP’s bottom at $0.17 and predicted the subsequent rally to $0.34 recently pointed out that XRP printed a “death cross on the weekly chart,” implying that further losses could be sustained in the coming weeks and months.

While the above analysts seem to be concerned, there are some silver linings for bulls.

Also, a custom indicator known as the IchiEMA has printed a buy candle on the weekly chart of the cryptocurrency. This signal was seen two weeks before the altcoin began its infamous surge at the end of 2017, during which the asset gained over 1,000% in under a month’s time, rallying from $0.20 to a price above $3.00.

It seems that trading XRP remains a probability game that will require traders to weigh the bullish and bearish factors to try and come to a conclusive forecast.

Why an Analyst is Expecting a 40% Drop in Ripple’s XRP as Crypto Crash Continues was last modified: February 26th, 2020 by Nick Chong