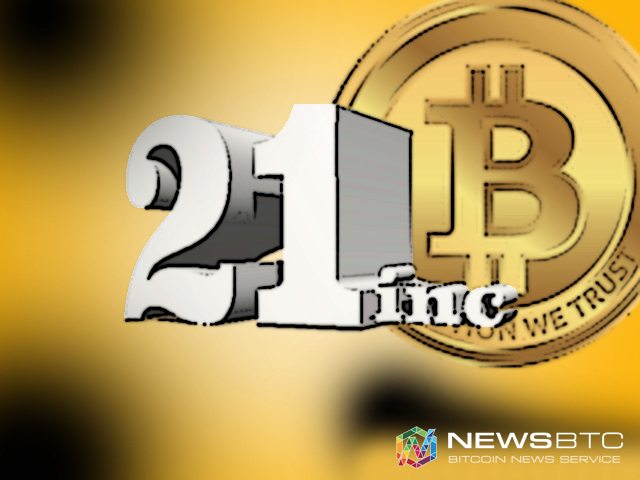 21 Inc., Building the Future of Bitcoin

Bitcoin and blockchain technology, which were niche segments a couple of years ago has now become the hottest sectors in the technology industry. the number of startups and companies working in this sector has grown exponentially as well.

While it is hard to keep track of all the companies involved in the digital currency/digital currency technology, there is a handful who have earned recognition by doing things a bit differently and 21 Inc. is one such company.

It is not just us who are saying 21 Inc. is different, mainly for the products they have been building and a much larger vision shared by the promoters of the company. Many other individuals, publications and business entities tend to share the same opinion about 21 Inc. as NewsBTC.

21 Inc., the company founded by Balaji Srinivasan, Veerbhan Kheterpal, Daniel Firu and Nigel Drego is named after the total number of bitcoins, in millions that are ever going to be mined by the network. 21 Inc. is one of the very few companies in the world that received a nine-figure funding from some of the biggest names in the investment circles including Khosla Ventures, Winklevoss Twins, and Andreessen Horowitz.

21 Inc. recently launched a Bitcoin computer, the first of its kind which is small and can connect to the blockchain. The company considers bitcoin to be the fundamental system resource of the future and the CEO, Balaji Srinivasan believes that the future computers connected to the blockchain may as well start trading with other systems to create a machine economy. With the new bitcoin computer, the company has built a development device for the future, based on which the upcoming computers can be designed.

In addition to the Bitcoin computer, the company has also launched a software which is also named 21. The 21 software is compatible with Linux and Apple Mac operating systems at present. The Windows version of the software is expected to be launched soon. By using the software and the Do It Yourself instruction kit that comes along with the package can be used by enthusiasts and hardware engineers to build mining devices out of spare processors and chip platforms like Raspberry Pi and Arduino. Both of these products were announced by 21 Inc. at the recently concluded Consensus conference.

With the help of an embedded mining chip inside the Bitcoin computer, 21 Inc., has made its device mining ready. These Bitcoin computers can be classified as the prototypes of the computing devices of the future which will talk to the blockchain. Now, is such a device necessary? Do people really need it? If asked, Balaji Srinivasan has a perfect answer, which he has explained recently in one of the interviews on Yahoo Finance. By using Linux as an analogy, he says that many people using operating systems other than Linux, don’t even realize that they are using Linux every day. Every time somebody browses the internet, they are using websites that are mostly hosted on Linux platforms, the Android phones and tablets used by the majority of the mobile device users are built on a Linux kernel and so on. Similarly, bitcoin is like Linux and in the near future, everyone will be using bitcoin without even realizing it.

The products and software 21 Inc. is currently building may not make sense to many people who do not understand bitcoin, but from a bitcoin user or an enthusiast’s perspective, the company is either building the future for bitcoin or preparing the future to leverage upon the digital currency. With such a huge mission in its roadmap, the $121 million funding received by the company is justified and we can expect the company to come up with some amazing products in the near future.