The transparent nature and increasing oversight on Bitcoin-related transactions mean it hard to launder money via the network. That’s unlike traditional systems where banks now have to fire employees and shoulder heavy fines after flouting AML and KYC rules. It is because of this that Bitcoin (BTC) is gaining ground and resulting demand could fuel the next wave to $50,000 according to Brian Kelly.

There is always something special about Bitcoin. It is trustless, global and well, laser guided by law. Since the code is law and automated, outright thuggery, theft and literally any attempt to bend the rules are but a hard task to execute. There have been attempts to wash money via the system, and after its failure and the DoJ slapping heavy fines, hard lessons were learned further revealing how the network is secure, transparent and traceable.

That is, as an emphasis, Bitcoin works by law and every transaction is visible. It has been made hard by specialist companies like Chainalysis charging a premium for their sleuthing. That is why, despite infrastructure development and adoption not being fast as expected, Bitcoin will have more utility in the future and entities leveraging the system won’t have to factor in massive litigation costs like what banks do.

So far, and according to Pompliano tweet, bankers have had to shoulder fines exceeding $160 billion. Unfortunately, from their opaque operations, more of their sinister money laundering activities will continue to come to fore as privacy and transparency calls increase.

Since Bitcoin’s creation 10 years ago, the banks run by these 7 men have been fined over $160 billion for various crimes and regulatory violations.

I’ll trust Satoshi over them any day. pic.twitter.com/xSAXlgQj6Q

Therefore, with use, increasing adoption levels and confidence in an immutable network, will Bitcoin (BTC) erupt above $6,000 towards $50,000 as Brian Kelly says? Only time will tell.

Bitcoin is up more than 30% this month and @BKBrianKelly says it could hit new highs by this date… pic.twitter.com/afC58AqIGW 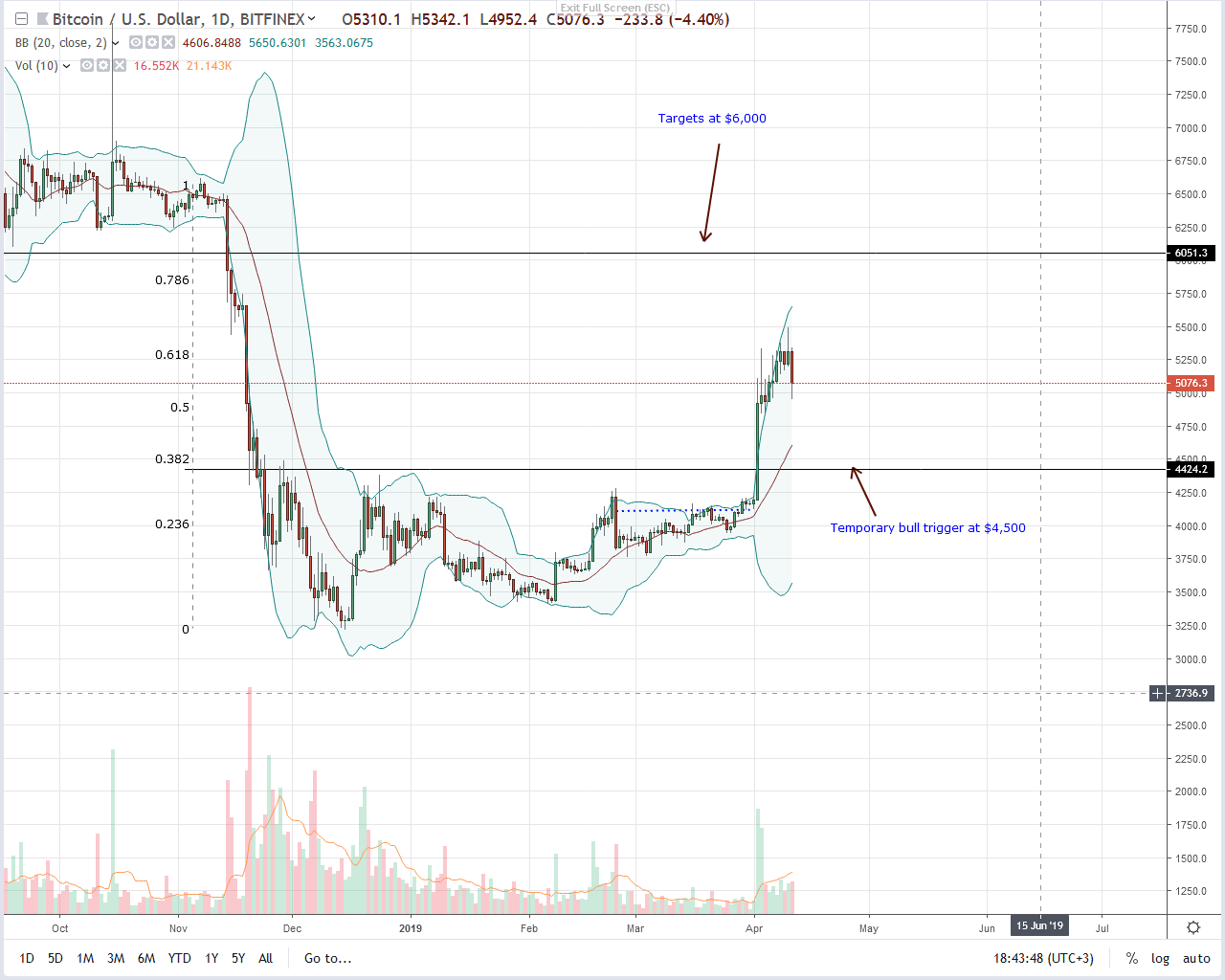 Indeed, the optimism is there but before Bitcoin edge past minor resistances at $5,800 and eventually explode past $6,000, heavy liquidation during the Asian session is a scare. The question now is whether this will catalyze a sell-off from spot level.

Despite this fear, we are optimistic. Note that today’s bar, though bearish, has a long lower wick meaning there is resistance for lower lows. However, as the stretch of last week is corrected in a natural cool off—we have lower lows relative to the upper BB even if Bitcoin (BTC) is printing higher–, every dip is a technically a buying opportunity.