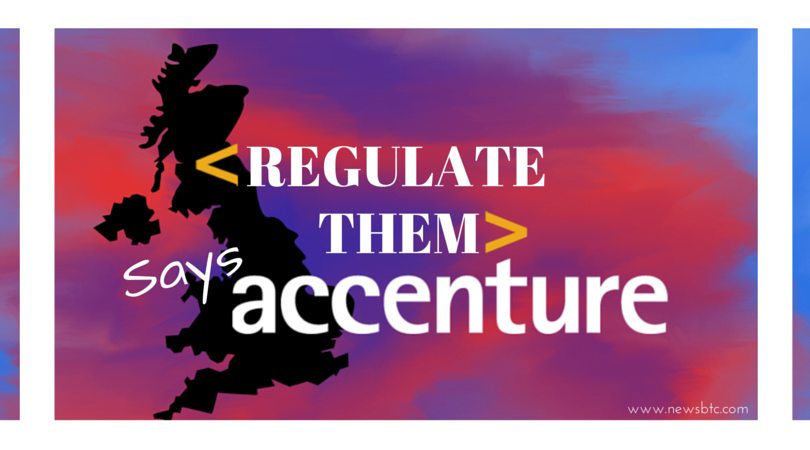 According to an investigation by Coindesk, the U.K. government is currently working to understand the developments in the cryptocurrency industry, and has recently been advised by Accenture to start regulating bitcoin wallets. According to the company, the biggest problem associated with bitcoin is its negative reputation for being used in money laundering and criminal activities.

Note that Accenture has also welcomed progress in the digital currency industry and is eager to see more of its practical uses explored. Prior to this the U.K. government has released a call for more information on the cryptocurrency industry.

According to Accenture, the same requirements that apply to opening a bank account in the UK should also apply for bitcoin wallets. This include the submission of proper identification, which would be backed by the know-your-customer checks in place for banks.

Aside from that, Accenture proposed the creation of an Authorised Digital Currency Wallet Institutions list, which would be similar to the Authorised Payment Institutions database. In addition, bitcoin wallets that are included in the list must be regulated by a central authority and adhere to compliance rules.

Accenture also pointed out that, without the support of the UK government, banks would decline to cooperate with bitcoin wallets and other digital industry companies in creating solutions that could enhance the security in the cryptocurrency industry. A spokesperson shared that they are interested in the sector because they are currently working on innovations related to blockchain technology.

“We are currently experimenting with blockchain technologies in our Technology Labs to test use cases relevant to our clients’ interests. The consultation was an opportunity to share our thought leadership with the government and contribute to the debate,” he added.

Tags: Advicebitcoin regulationBitcoin UKbitcoin walletNews
Tweet123Share196ShareSend
BitStarz Player Lands $2,459,124 Record Win! Could you be next big winner? Win up to $1,000,000 in One Spin at CryptoSlots