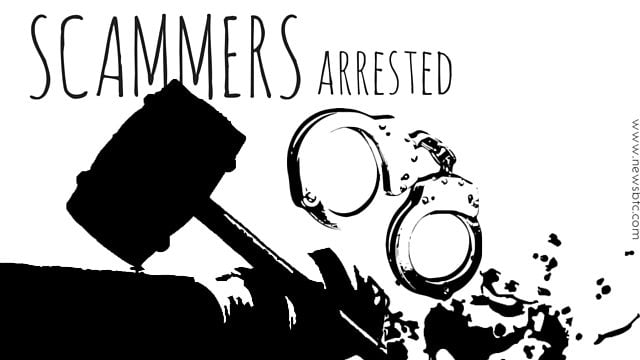 MyCoin is currently under investigation for running a Ponzi bitcoin scam, and two of its organizers were recently arrested in Taiwan. According to Taipei’s Criminal Investigation Bureau, individuals Lu Kuan-wei and Chen Yun-fei were apprehended since they have held a few events for MyCoin.

“Chen and Lu held several events for investors convincing each one to spend NT$1.62 million (US$49,600) for 90 BTC and an account with MyCoin’s parent company, which would distribute 0.63 of a bitcoin every day for a total value of NT$11,000 (US$337). The investors were told that their investment would be returned to them after just four and a half months,” indicated the China Times report.

The bitcoin scam allegedly operated by MyCoin has resulted to customers reporting around $8.1 million in losses to Hong Kong police. According to the Hong Kong Commercial Crime Bureau (CCB), 43 investors between the ages of 21 and 71 years old lost anywhere between HK$50,000 to HK$15m each when the exchange ceased operations.

The reported scam also resulted to client losses in other Asian countries, as victims were duped into investing their funds on the exchange after being promised outsized returns. Taiwanese authorities have already been conducting investigations on this bitcoin scam since March this year.

Earlier this year, five individuals connected to MyCoin have already been arrested in Hong Kong. “One of the women was picked up when officers boarded a casino ship anchored off North Point yesterday morning. Police caught the other four at their homes in Yuen Long, Tin Shui Wai, Wong Tai Sin and North Point,” reported the South China Morning Post.

In Thailand, police have conducted raids on apartments wherein bitcoin scam organizers have reportedly been staying. Thailand’s assistant police chief Suwira Songmetta estimated that about 120,000 people were affected by the scheme and that losses could reach as high as 38bn Thai bhat ($1.13bn).