Roger Ver’s Bitcoin Cash is at a precipice. It could fall apart if there is no consensus draining with it millions in investment and propelling Bitcoin higher. The standoff between Craig Wright of Bitcoin SV and Jihan Wu’s Bitcoin Cash ABC could be damaging. Since price relies on the outcome, traders should remain neutral ahead of the upgrade knowing that breaks below $400 could usher a wave of unrelenting bears eyeing $250.

So far, the US Federal Reserve is on an interest rates spiking spree and this worries Ron Paul. As an avid supporter of the Gold Standard and cryptocurrencies, he is calling for the complete audit of the FED and removal of all capital tax gains on cryptocurrencies and precious metals as Gold. By tightening interest rates as the capital market take a hit, Ron Paul say the FED is on a manipulation path, controlling money supply and creating an illusion of prosperity which will be disastrous when reality catches up.

Once the stability illusion bubble pops, he projects, the accompanying recession would be so deep twisting the FED to start the whole boom and bust cycle once more. The former US representative reckon that the removal of capital gain taxes on cryptocurrencies and alternatives as precious metals would spur mass adoption. With mainstream use of cryptocurrencies, then innovation would follow through allowing for better solutions and more user cases.

In the meantime, Jim Song-the controversial Bitcoin developer whose opinion often flares the community says there is a real chance Bitcoin Cash will disintegrate in November. While talking to Tone Vays on YouTube, the developer touched on the upcoming hard fork on Nov 15, 2018 and how important it was for consensus to be struck before the D-day. As it stands Craig Wright is finding support from CoinGeek and as he advocates for SV implementation he has the hash power. On the other hand, Roger Ver and Jihan Wu are rooting for Bitcoin Cash ABC and Wormhole. So, unless there is a solution, this would likely wreck the coin benefiting Bitcoin as a result. 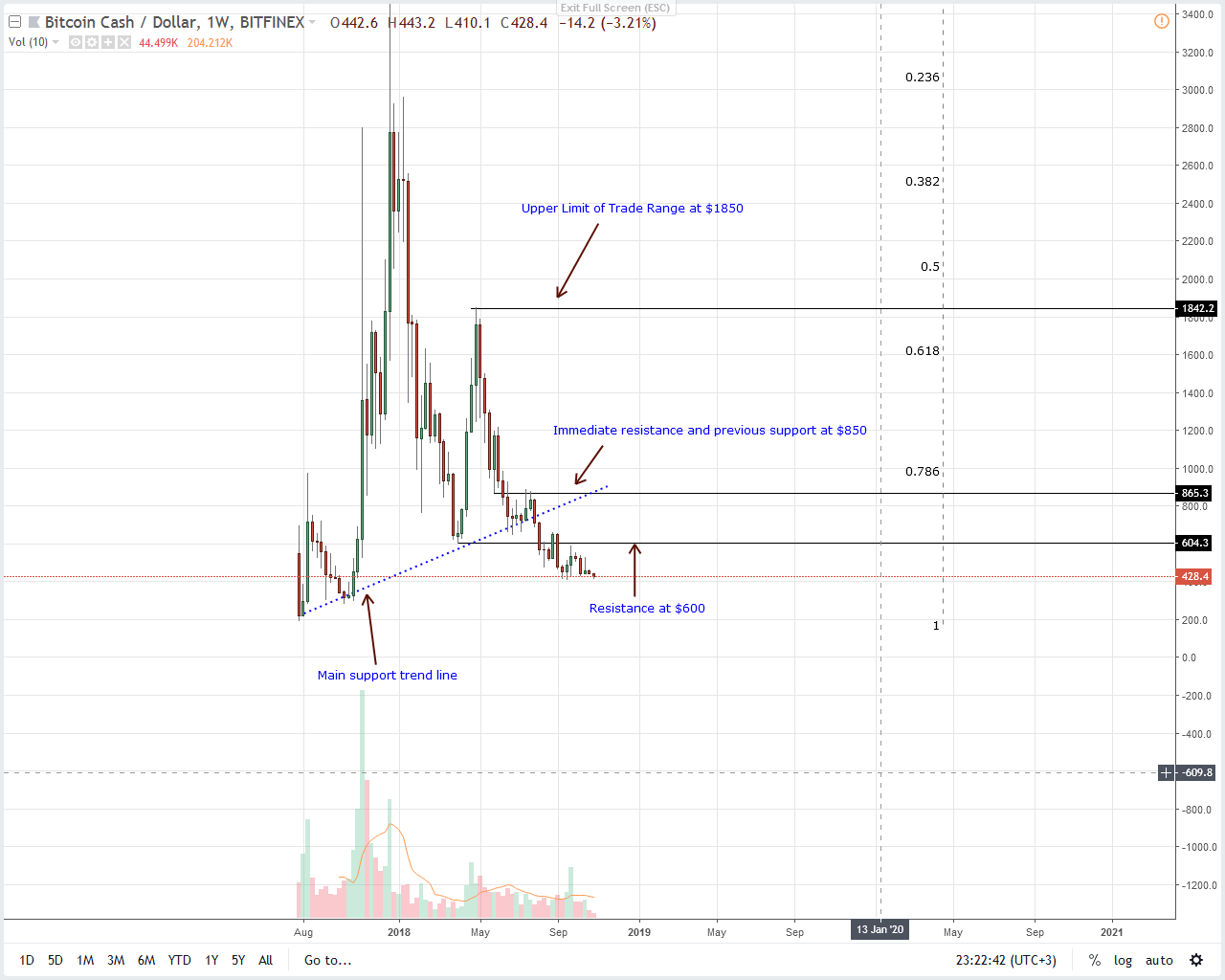 Like in our last BCH/USD price analysis, we retain a bearish outlook. This overview is because of fundamental factors as the indecision around Nov 15, 2018 hard fork. It is also technical because prices are trading within a bear break out of early August. Then, we saw BCH melting down below $600.

Therefore, if we trade in line with our previous trade plans then it is likely that BCH/USD shall falter. Price could sink below $400 more so if their fork goes haywire. Inevitably this shall trigger a wave of sellers eyeing $250-$300 BCH all time lows.

But should there be consensus and BTC recover, enough momentum might build thrusting prices above $600. Thereafter conservative traders shall load up on dips with first targets at $850. 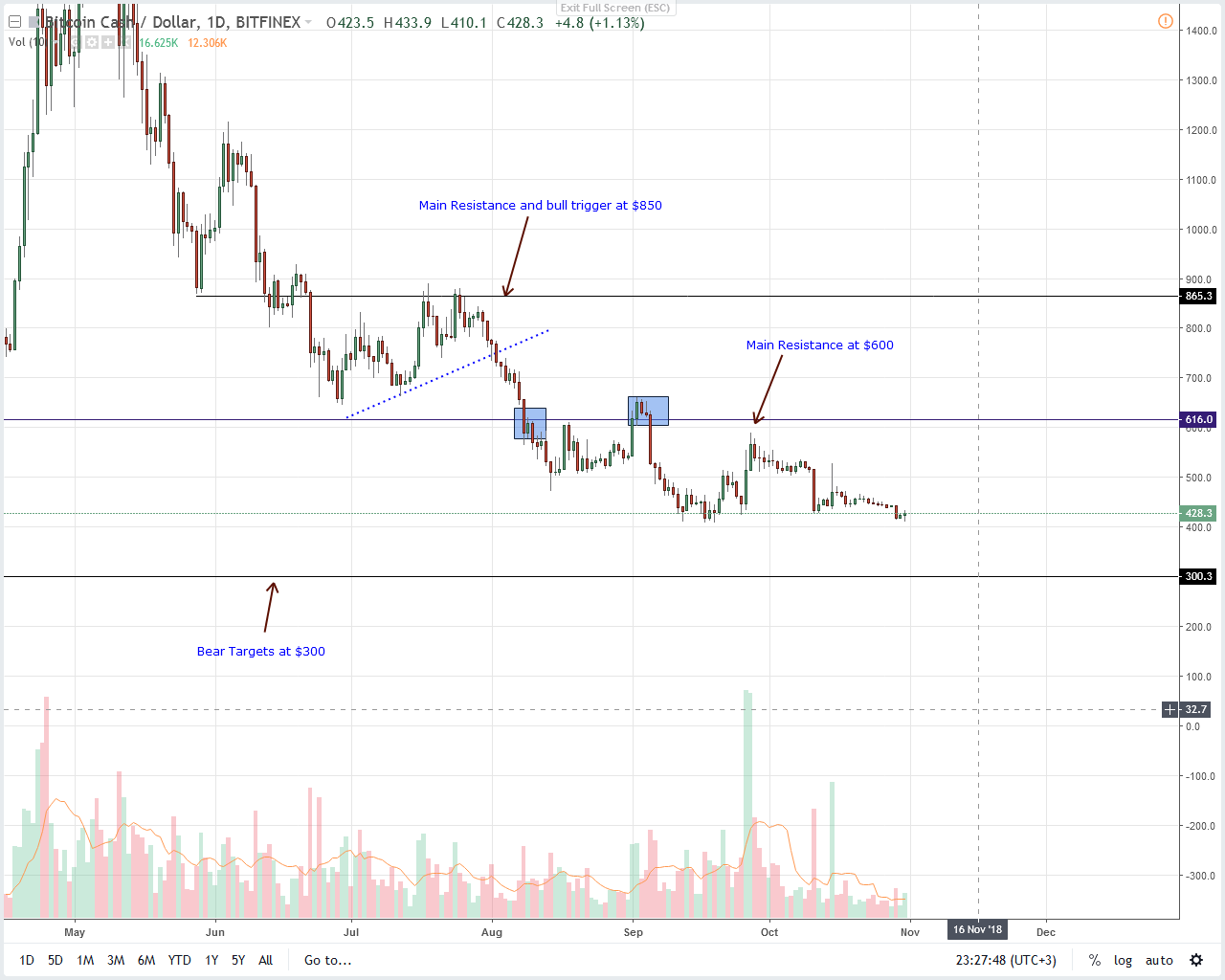 The consolidation in the weekly chart is clear in this time frame. Not only is the bear break out pattern of early August clear, the significance of $400 is obvious. Because of our bear leaning, we recommend taking a neutral stand until after there is stability in the market. But should there be break outs below $400 in days to come then sellers shall trade as aforementioned. On the other hand recoveries above Oct 15 highs could be the impetus the BCH/USD market require for recovery.

TA: Bitcoin Short-term Pullback Could Be Attractive To The Bulls