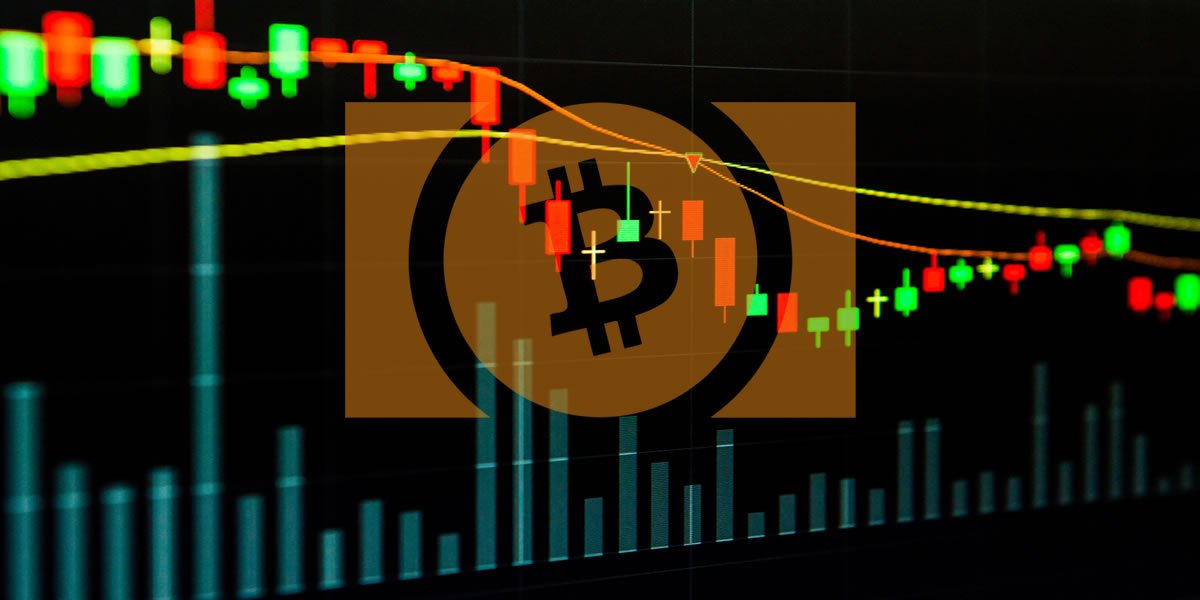 Earlier, Jihan Wu had warned that re-deploying hash rate from Bitcoin network to support Bitcoin Cash ABC could lead to a massive sell off across the market more so in BTC. We are already seeing that print and as BCH/USD prices drop days after forking, Giga Watt is unable to pay creditors.

Not only are payment processors, chip-set manufacturers and coin hodlers bleeding but the situation is so dire, Giga Watt is has cash flow problems. It has already filed for bankruptcy under Chapter 11 Bankruptcy Protection meaning the law shall take its course allowing for proper reorganization of Giga Watt’s affairs, assets—of around $50,000 and debts whose estimates place at around $10 million to $50 million.

Under the law, the mining firm won’t be liquidated. Instead as the law dictates–the management or a trustee might step in to operate on behalf of 20 unsecured creditors claiming $7 million. At the moment, we aren’t sure whether Andrey Kuzenny—one of the company’s directors owning 10 percent of the firm will continue calling shots or if someone outside the company will take over. However we know the meeting announcing their bankruptcy filing protection was convened by him.

Although worsening market conditions are obvious contributors, Giga Watt’s plans are grand if not over ambitious. Describing themselves as the Best home for Computing Power the Washington based “world’s first full-service specialized compute power provider” aim was to be a major player in North America crypto mining.

Boosting an impressive resume with 50MW of infrastructure power capacity in operation, complete transparency and offering extraordinarily low effective electricity cost of around 2.8 cents per KWH for mining different coins including BCH via S9 miners. 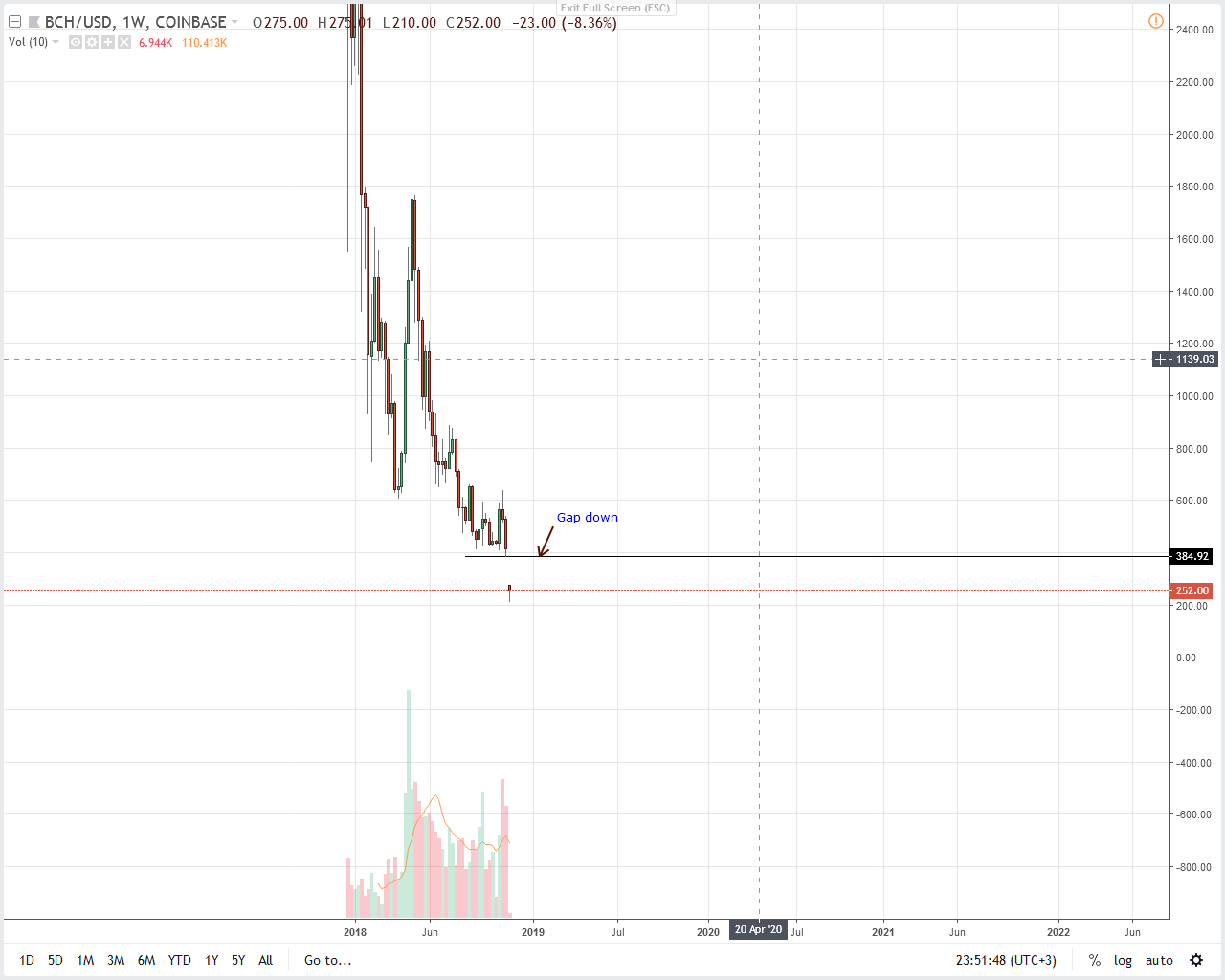 While most exchanges as BitFinex are yet to re-activate BCH/USD trading, losses are huge all thanks to this expensive ABC and SV hash war. From statistics, BCH is down 55 percent in the last week and is now trading at new lows at $235.

Of course, fading the market is the last thing on our mind and though prices could recover, it mostly depends on how the hash rates between CSW and ABC diverge.

Should the gap narrow or CSW eclipse that of ABC as the number of full nodes running the SV client increase then BCH could drop to super new lows—perhaps below $200. 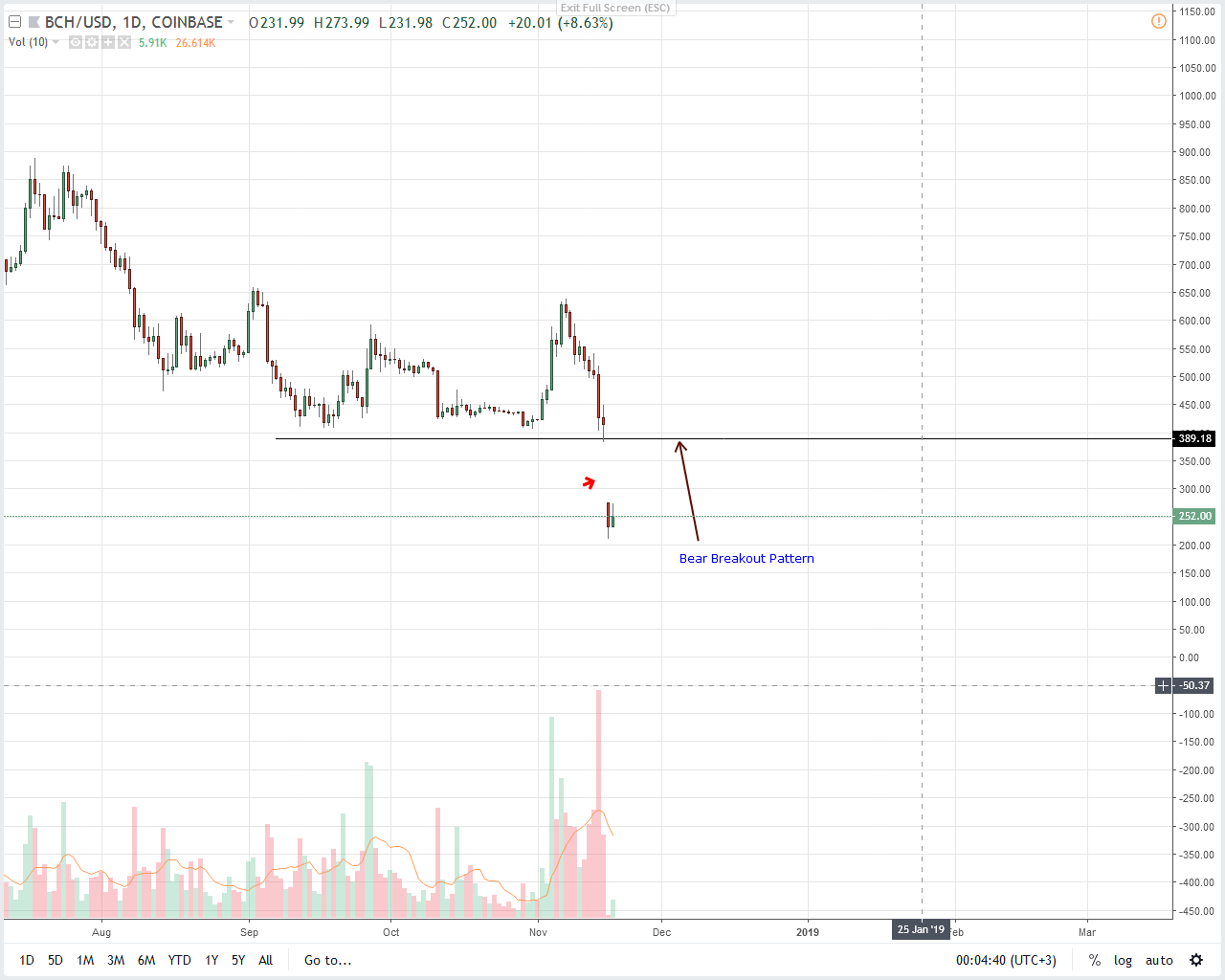 What we have in the daily chart is a bear break out pattern. In the aftermath of the hard fork, BCH prices almost halved dropping from $420 to $240 but are now stable.

Nonetheless, this shouldn’t be interpreted as positive because as long as prices are trading below this resistance previous support at $400, sellers are in charge. Therefore, as price action dictates, we recommend selling BCH on every pull back in lower time frames and let the trade run in exchanges that allow BCH trading.

For safe trading, fitting stops should be around $300. In case they are hit then traders would revert back to neutral waiting for convincing pull backs triggering sells and subsequent drop of BCH prices below Nov 20 lows.