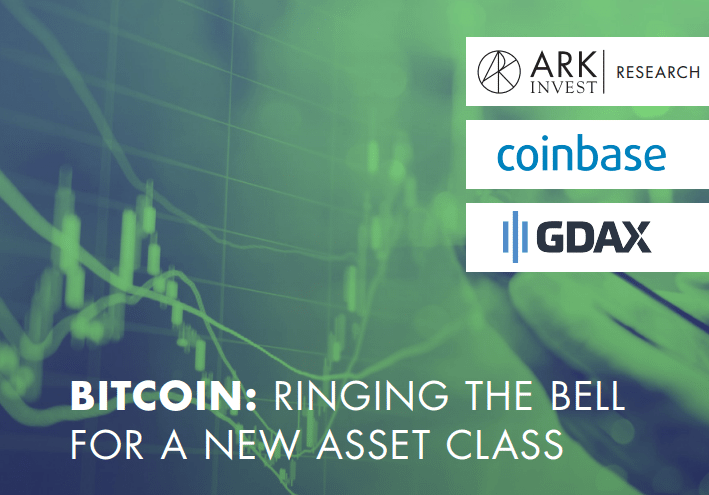 Since its inception, Bitcoin has broken the boundaries defined by traditional financial instruments and institutions. The peer to peer, open sourced decentralized digital currency has shown that the whole financial ecosystem can also operate without banks and financial institutions. However, bringing about changes in a system is very hard, if not impossible.

Changing the way things work in an organization or a system is a hard task, as mentioned in the earlier paragraph. That’s why there is a separate branch of management called Change Management, applicable for individual organizations and companies. But here we are talking about the whole global economic infrastructure, which is built around so many dependencies. However, Bitcoin, other associated digital currencies, and digital currency technology have been slow but gradually making progress in this regard.

A recent report published jointly by ARK Invest Research and Coinbase offers brief insights into Bitcoin as a new asset class. Aptly titled “Bitcoin: Ringing the Bell for a New Asset Class” is a white paper by Chris Burniske, a Blockchain Analyst and Products Lead at ARK Invest and Adam White, the Vice President of Business Development and Strategy at Coinbase. The paper differentiates Bitcoin from other asset classes while comparing it with the 3 predefined asset classes as described by Robert Greer in a paper “What is an Asset Class, Anyway?” in 1997.

The three asset classes are Capital Assets, Consumable/Transformable Assets and Store of Value Assets. However, there are many assets which fall into two or more categories as the boundaries demarcating asset classes may not be applicable to them due to their inherent characteristics and usage by people. The report lists 4 such characteristics that may lead to blurring of lines between asset classes – Investability, Politico-Economic Features, Correlation of Returns: Price Independence and Risk-Reward Profile.

Investability has two faces, long term and short term. Bitcoin is relatively new to the financial ecosystem with the infrastructure as well as adoption still in the process of scaling. However, the digital currency satisfies both the faces of investablility. Short term bitcoin investments are marked by traders on various bitcoin exchanges and platform, while long-term investments can be attributed to bitcoin liked securities like GBTC and other exchange traded funds.

Among all mediums for the exchange of value, Bitcoin bears a closer resemblance with gold than other currencies. However, the basis of value of Bitcoin is entirely dependent on its mathematically metered supply and infrastructure built around it. Even when it comes to governance, Bitcoin doesn’t have a centralized structure, which is unheard of with other assets. Bitcoin has fixed number of units, without any external monetary policies or supply characteristics influencing them.
Bitcoin is a unique asset which has witnessed rapid evolution with diverse applications in the financial system.

Usually, when it comes to different asset classes, there exists a correlation between them, either positive or negative. These correlations represent how the performance of one asset affects the other asset. But bitcoin is quite independent, with price movements separate and distinct from other asset classes. Bitcoin is found to have a very low maximum correlation than any other paired assets.

The Risk-Reward profile factors in the volatility and absolute returns offered by any asset class. Bitcoin has fared well in both the departments in the recent days. The volatility of Bitcoin has reduced considerably in the past few months, making it much more stable than gold. At the same time, the absolute returns offered by bitcoin has been towards the positive end of the spectrum. However, there has been a decline in the percentage of returns in the recent years, but still positive nevertheless.

“Bitcoin exhibits characteristics of a unique asset class—meeting the bar of investability, and differing substantially from other assets in terms of its politico-economic profile, price independence, and risk-reward characteristics. Because our analysis encompasses only five years, it will be important for the community to continue to monitor its behavior in the context of the broader markets.”

The study concludes that Bitcoin is a unique asset class which is similar yet quite different from traditional asset classes in more than one way.