Satoshi has spoken to John McAfee, and he is unhappy that the talented technologist is after uncovering him, ten years after mining the first Bitcoins. With this revelation, Bitcoin (BTC) prices are stable but down 2.1 percent in the last day.

The discussion around the true identity of Satoshi Nakamoto, the anonymous founder of the multi-billion platform in Bitcoin, is always an interesting debate. While it is good that the network is as decentralized as it is with no figureheads—unlike Tron or Ethereum for example, the quest for cracking open the seal and pinpointing the brains behind Bitcoin is on and promise to be another thriller for curious followers. After Craig Wright’s decision to slap critics with lawsuits and consequent de-listing from Binance and several other exchanges, there is a new lead from a Bitcoin supporter and perma-bull, John McAfee.

John McAfee, the often outspoken and eccentric leader behind a successful McAfee Antivirus now claims to know, with confidence, who Satoshi Nakamoto is. Although facing extradition from the Bahamas and concurrently planning to run for the presidency, John told Bloomberg that he would “out “Satoshi in weeks before retracting his comments because he had “talked with Satoshi” and the elusive founder was apparently “unhappy with his efforts”:

“I’ve spoken with him, and he is not a happy camper about my attempt to out him.”

“Releasing the identity of Satoshi at this time could influence the trial and risk my extradition. I cannot risk that. I’ll wait.” 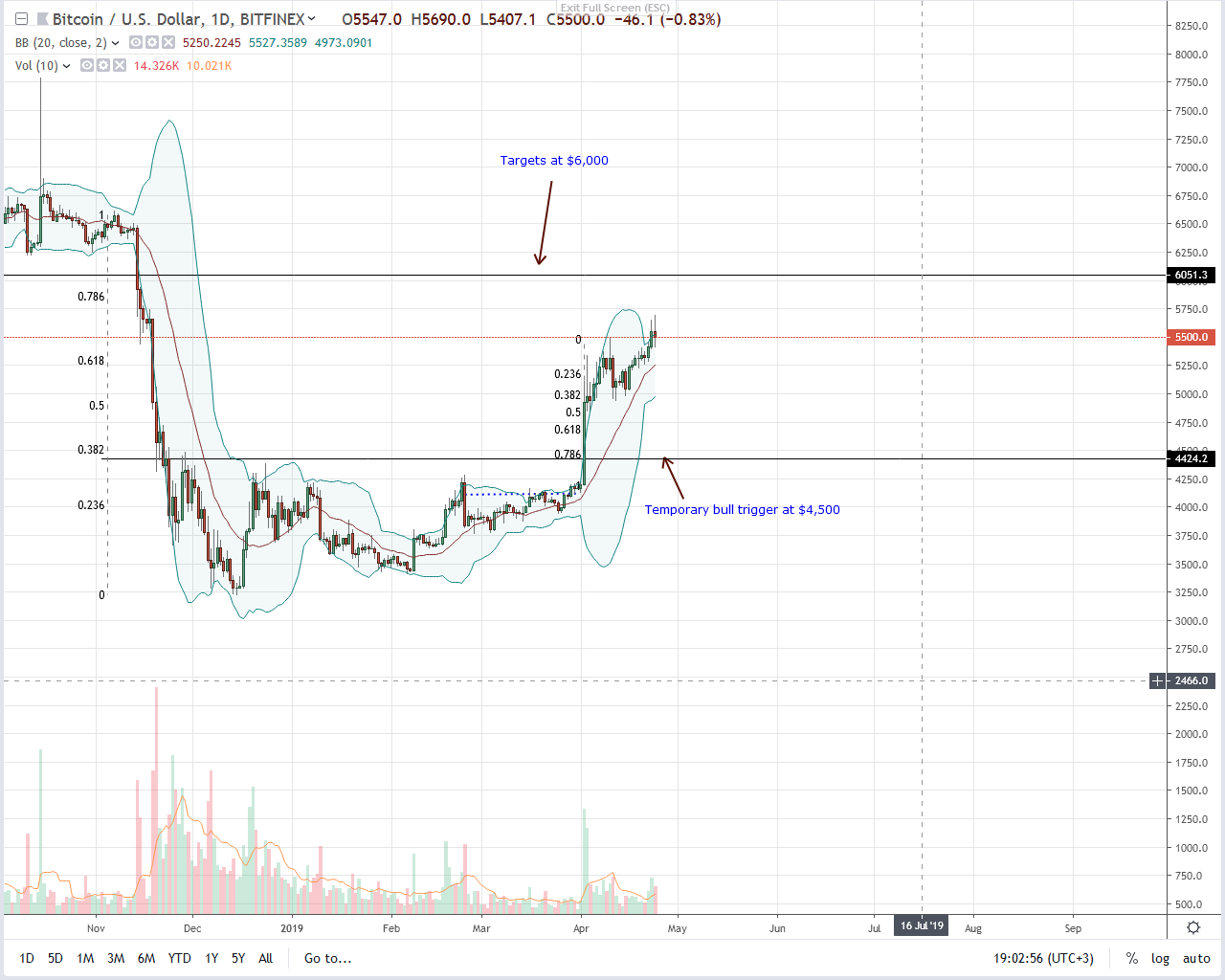 Exchanging hands at above $5,400, Bitcoin (BTC) is firm and up 4.7 percent in the last week. Even so, bears are back in a correction, heaping pressure on the coin which as a result is down 2.1 percent at the time of press.

Nonetheless, prices are trending above critical resistance levels. Even if traders need prices to firm-up above $5,400 before the next wave of higher highs thrust prices to $5,800, $6,000 effectively reversing losses of Q4 2018, it is imperative that participants keen prices above $5,000.

By doing so, buyers of early Apr will be in control. Besides, with BTC trading within a bullish breakout pattern evident in the weekly charge, the path of least resistance will be up as every dip is another buying opportunity.

There is a slight over-extension in the daily chart since yesterday’s close is above the upper BB. Regardless, buyers are in control, and from an effort versus result point of view, confirmation of Apr-2 buyers must be with high volumes closing above Apr-23 highs with high volumes exceeding 19k of Apr-11.