Eventual regulation of cryptocurrencies in the US, following Steven Mnuchin presser, could have far-reaching consequences on Bitcoin and cryptocurrencies. In the meantime, BTC is on edge and may slide to $9,500.

From launch, Bitcoin is considered a threat to the status quo. However, scrutiny was amplified following the parabolic rise of digital asset prices in Q4 2017 and meltdown of 2018 that highlighted the volatile nature of these emerging assets.

Attractive as they are, Bitcoin and cryptocurrencies, in general, are appealing to libertarians as well as those seeking refuge from economic turmoil. Even so, President Trump’s comments did spark a debate on the real value proposition of Bitcoin.

Claiming that the USD is the most powerful currency in the world, his concerns stem from BTC alleged use as a tool for money laundering. Trump adds that cryptocurrencies are based on “thin air.”

Less than 72 hours later, the US Treasury Secretary Steven Mnuchin press conference echoed Trump’s concerns as he explicitly calls for oversight. Terming the rise of cryptocurrencies as a threat to national security, Mnuchin said:

“Treasury has been obvious to Facebook, to bitcoin users and other providers of digital financial services that they must implement the same anti-money laundering and countering financing of terrorism, known AMLCFT safeguards as traditional financial institutions.” 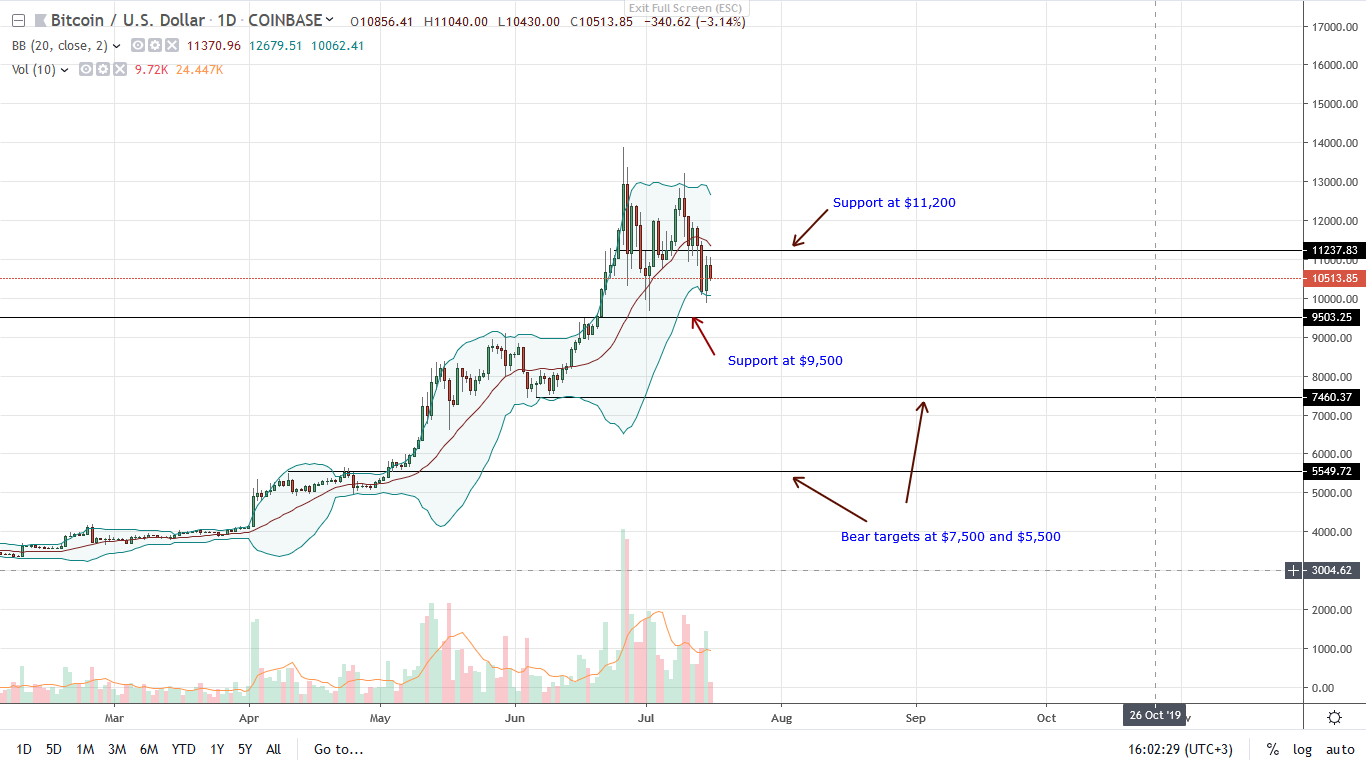 At the back of a consolidation, BTC bulls are weak and prices could print lower in days ahead. In line with previous BTC/USD trade plans, sellers are in a pole position and likely to press lower. Note that aside from the double tops of the mid-last week and late June, prices are below June 27 lows.

As such, it confirms not only the double bar bear reversal pattern of June 26 and 27 but the correction of June 26 overpricing. Because of this, traders should consider offloading BTC long positions on every pullback in smaller time frames.

With support at $9,500, June 26 anchors this trade plan. Any reaction at this support line accompanied by a spike in trading volumes exceeding 82k would either confirm sellers or catalyze buyers aiming at $14,000.