Roger Ver is of the view that BCH is a medium of exchange coin, and Bitcoin supporters are lost. However, other statistics reveal that Bitcoin Cash activity is low with a median transactional value of less than one cent. At the same time, the hash rate is flat with dwindling public addresses.

On one end, Roger Ver, the main protagonist behind Bitcoin Cash, maintains that BCH supporters never left Bitcoin. He insists that it is BTC ardent fans that are deviating from Bitcoin’s road map of being “cash” or a medium of exchange system. While it is true that Bitcoin is first of all a medium of exchange, allowing for trustless movement of funds across the globe, the expectations of future prices promotes the coin as a store of value.

Then again, because of its security, Bitcoin is a settlement layer that is competing with the legacy system with high throughput. Because of this, metrics show that Bitcoin is indeed superior to Bitcoin Cash despite Ver’s assertions.

Moreover, the median transactional value is dipping, standing at $0.0096, that is, one cent. Besides, the number of user activity—gauged by the number of public addresses– less than 50 percent of Litecoin and less than 33 percent of Dogecoin. A look at hash rates, the network is increasingly susceptible to a majority attack with 2.44 EH/s. 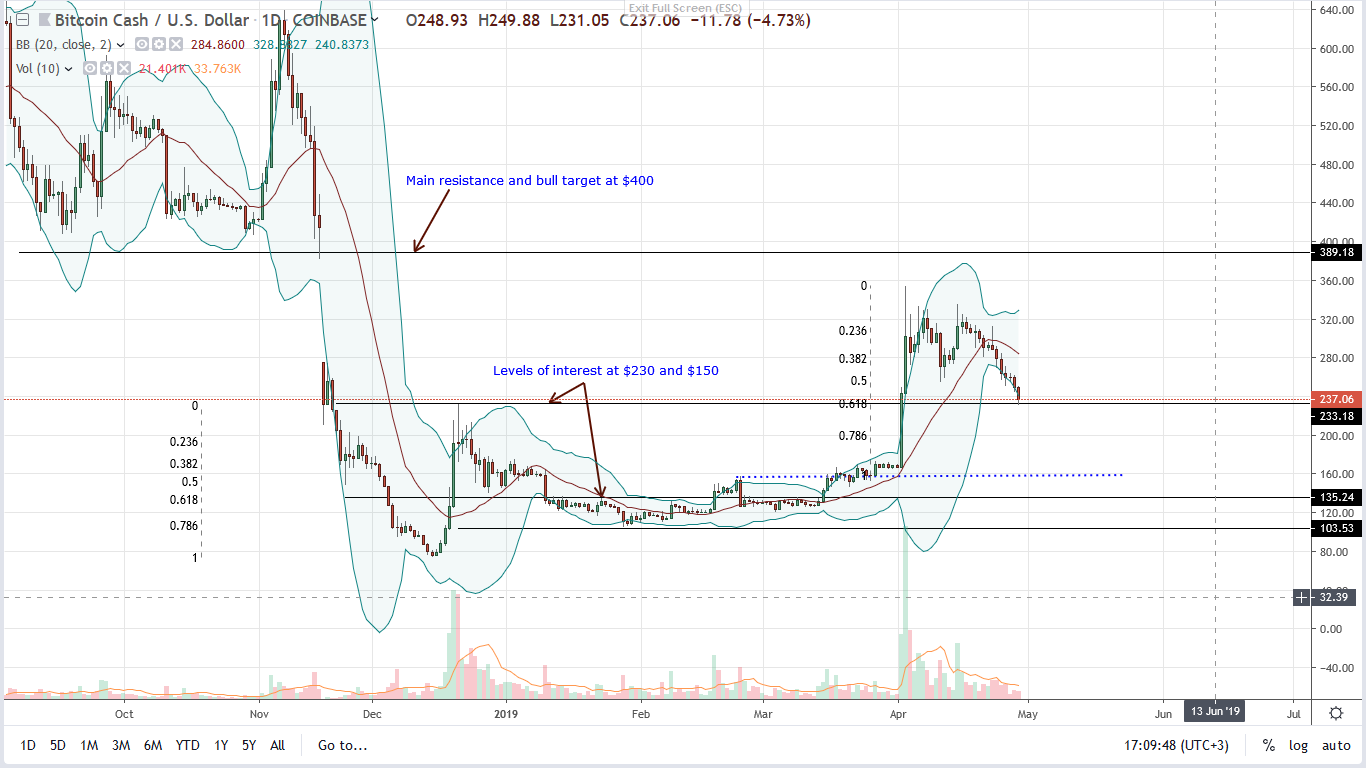 Price wise and Bitcoin Cash (BCH) is back to red, down 17.8 percent and 10.5 percent in the last week and day. Still, we are net bullish from a top-down approach.

Notice that from the weekly chart, there was an over-extension of after week ending Apr-14 when a whole bear closed above the upper BB. Typical of overvaluation, the movement towards equilibrium is forcing liquidation towards the middle BB. Even so, we expect prices to stabilize and that means support anywhere between $170 and $200.

Although prices may slump to $170, retesting the breakout levels in a classic retest, BCH are oscillating within the week ending Apr-6 high low. From an effort versus results point of view, this is bullish with loading opportunities available anywhere between Apr-2 lows and the 78.6 percent Fibonacci retracement levels of Apr-2-3 range.

Bear momentum is high as bars band along the lower BB. Nonetheless, the fact that prices are correcting means our initial stand is bullish thanks to resilient buyers and sellers who are yet to reverse gains of Apr-2-3. At the moment, any form of support within the $170–$200 zone must be with high volumes above averages of 36k or even 462k of Apr-3.

Tags: BCHBitcoin CashRoger Ver
Tweet123Share196ShareSend
Win up to $1,000,000 in One Spin at CryptoSlots