Bitcoin Cliff Hanger, BTC Slides 10.2% In A Early Stage Of A Correction

President Trump’s highlighting Bitcoin is bullish and hints of how disruptive the coin has been for the status quo. Leveling out the field and fronting end users, Bitcoin is huge for the libertarians. However, down 10.2 percent in the last week, BTC could register more losses in days ahead.

Presently, Bitcoin is at a brink. By printing massive losses over the weekend, there is a high risk that prices could tumble in the coming days. Although there was a slight response following president Trump’s comments on cryptocurrencies, the subsequent drop in asset prices across the board is negative.

While it may be a necessary correction following late Q1 and Q2 2019 rally, attention from a global leader, doubting the currency, should be a cause of worry. Even so, the advantages of Bitcoin and cryptocurrencies, in general, are numerous.

Firstly, its global nature cut out latency and extra Forex charges. Secondly, the lack of attack vectors thanks to its decentralization means it is immune to jurisdiction-specific turmoil. Because of that, Bitcoin is a store of value for citizens in imperiled economies as Venezuela, for example.

Speculative as it is, there is no doubt over the long term that BTC as a digital and valuable asset will be instrumental in shaping. 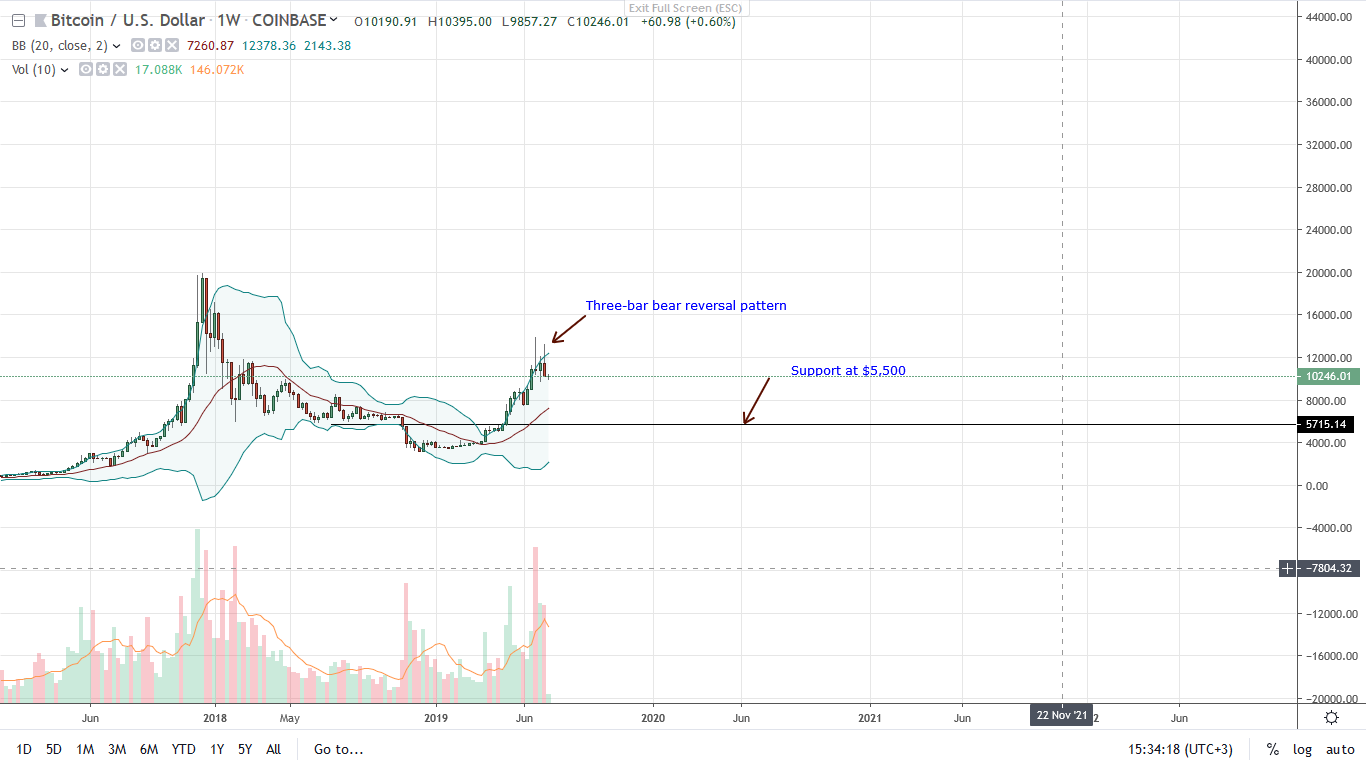 At the time of press, it’s a cliff hanger for BTC. Printing red, the coin is down 8.2 percent in 24 hours and 10.2 percent in the last week. As such, the path of least resistance is visible. Because of last week’s lower lows, there is a three-bar bear reversal pattern in the weekly chart.

Pointing of a possible correction, traders can exit their long positions and simultaneously sell the pullbacks. Like in previous BTC/USD trade plans, the first target is at $9,500. However, ideal bear targets assuming sellers press lower is $5,500 as that will complete the retest before March-June trend resumes.

Week ending June 30 anchors this trade plan. If there is confirmation of last week’s three-bar bear reversal pattern with high trading volumes exceeding 299k, BTC will likely slump to $5,500 as aforementioned. Similarly, the rejection of lower prices with equally high trading volumes blasting past $14,000 will reveal buyers and Q2 trend continuation with first targets at $15,000 and later $18,000.

Tags: bitcoinbtcPresident Trump
TweetShare
BitStarz Player Lands $2,459,124 Record Win! Could you be next big winner? Win up to $1,000,000 in One Spin at CryptoSlots