The fall from 2017 peaks was a test of resilience and even dashing for those who bought on “dips”. Though the technique called Dollar Cost Averaging may work, last year’s meltdown coincided with a cool off period weeks after the Bitcoin and altcoin market rallied to new highs. No doubt, the 74 percent retracement shook retail investors to the core. To quantify, there was a radical re-valuation and the total market cap shrunk 85 percent from peaks of $795.6 on Jan 6, 2018, billion to just over $125 billion on Dec 31 was a momentum of reckoning. A testing period weeding out speculators from enthusiasts.

But still, according to Jimmy Song–Bitcoin Educator, Developer and Entrepreneur, Bitcoin is king and because it rides on disruptive technology, “real disruption means that there’s bound to be significant volatility.” Even though prices slowed down, there was widespread adoption as the Bitcoin Gospel spread across the world reducing price volatility. Remember, during this period, altcoin prices dropped 90 percent after printing highs in late 2017 and early 2018.

Jimmy Song insists that there is a gulf between the king of crypto and altcoins. Bitcoin is an epitome of decentralization, a digital asset that the SEC has endorsed as a utility. In his opinion, the coin “has been in the enviable position of allowing the market to determine what’s desirable instead of some central authority.” 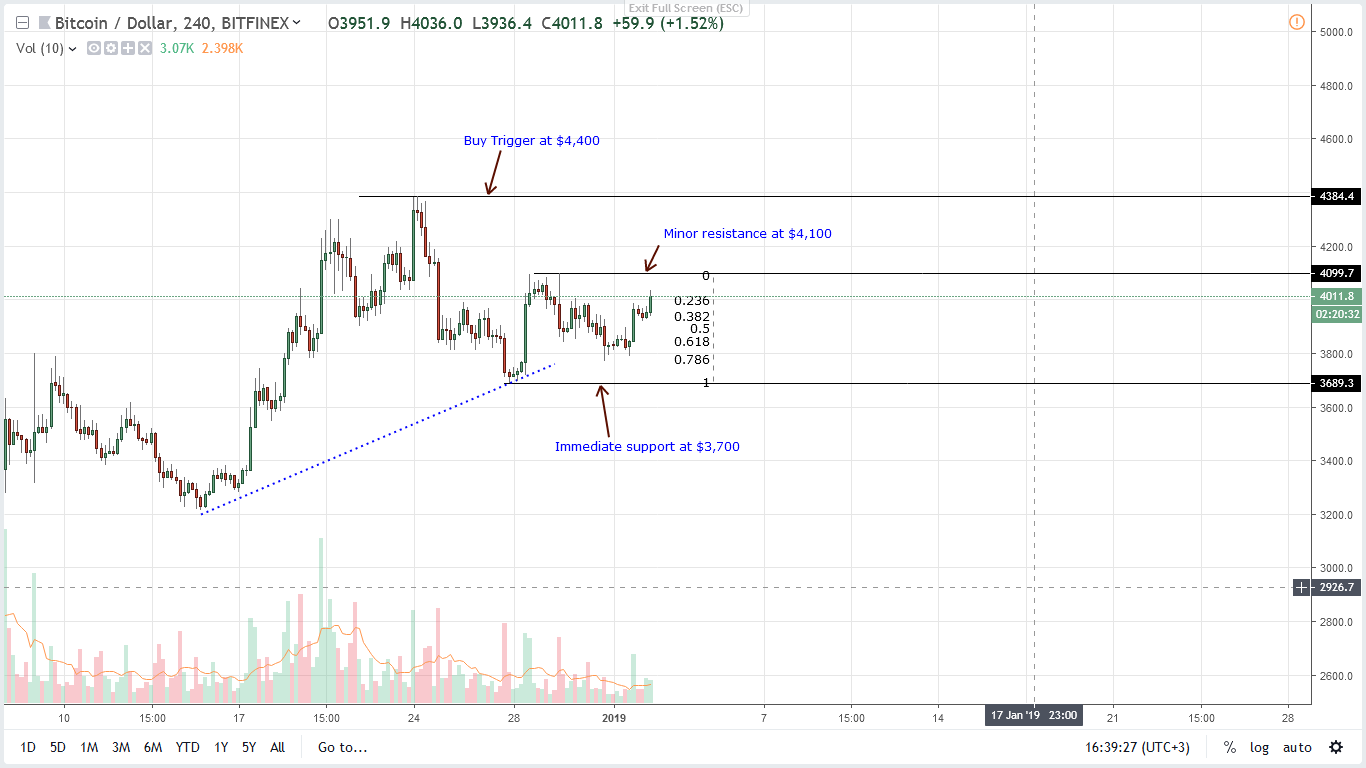 BTC prices are back to green, and after a period of consolidation hours before surging off from $3,700-800 support—which is also the 61.8 percent Fibonacci retracement level as laid out in our previous BTC/USD trade plan, prices are likely to expand above $4,100.

As aforementioned, BTC price expansion of Jan 1—2300 HRs, 6.5k versus 2.2k, is a confirmation of increased market activity and subsequent price increment between Dec 17 to 20 albeit with lighter volumes. This is normal and often print during consolidations.

Note that BTC prices are moving within Dec 28 high low and in a clear uptrend. Therefore, for prices to re-test $6,000, there must be firm conviction from buyers. This means any break above $4,100 must be at the back of above average trade volumes although aggressive traders can still buy at spot prices with stops at $3,800.

Our Bitcoin (BTC) Trade plan is as follows: