It was the objective of Satoshi Nakamoto to roll out a cash payment system. That is why efforts are being made to drive BTC to the mainstream, and aside from Wyoming, Argentinians using public transport means can load up their cards using BTC. No doubt, such efforts will help pump prices from spot rates.

For Bitcoin to strive, then it must find use cases. Aware that scalability is a major concern bogging down adoption, developers are working overtime to create a suitable scaling solution. Ahead of the pack is Elizabeth Stark who is working with her team to make Lightning Network a reality.

As a layer two, off chain alternative that has shown to be cheap, scalable and secure, it promises to revolutionize payment. However, it is still in beta. Regardless, critics are pouring in saying Lightning Network takes transaction off-chain, creating central hubs whose operations are against the state of the main chain—complete decentralization.

All the same, critics are quick to lambast a solution yet there are no other viable alternatives to rival LN. Aside from LN progress, public transport users can top up their SUBE Travel Cards using Bitcoin. It was made possible after a successful collaboration between BiTex and Alto Viaje—a travel card loading platform.

“We believe that this type of project is of great importance since it brings technology as disruptive as Bitcoin to the common people, demonstrating the true value and the applications it has in everyday life.” 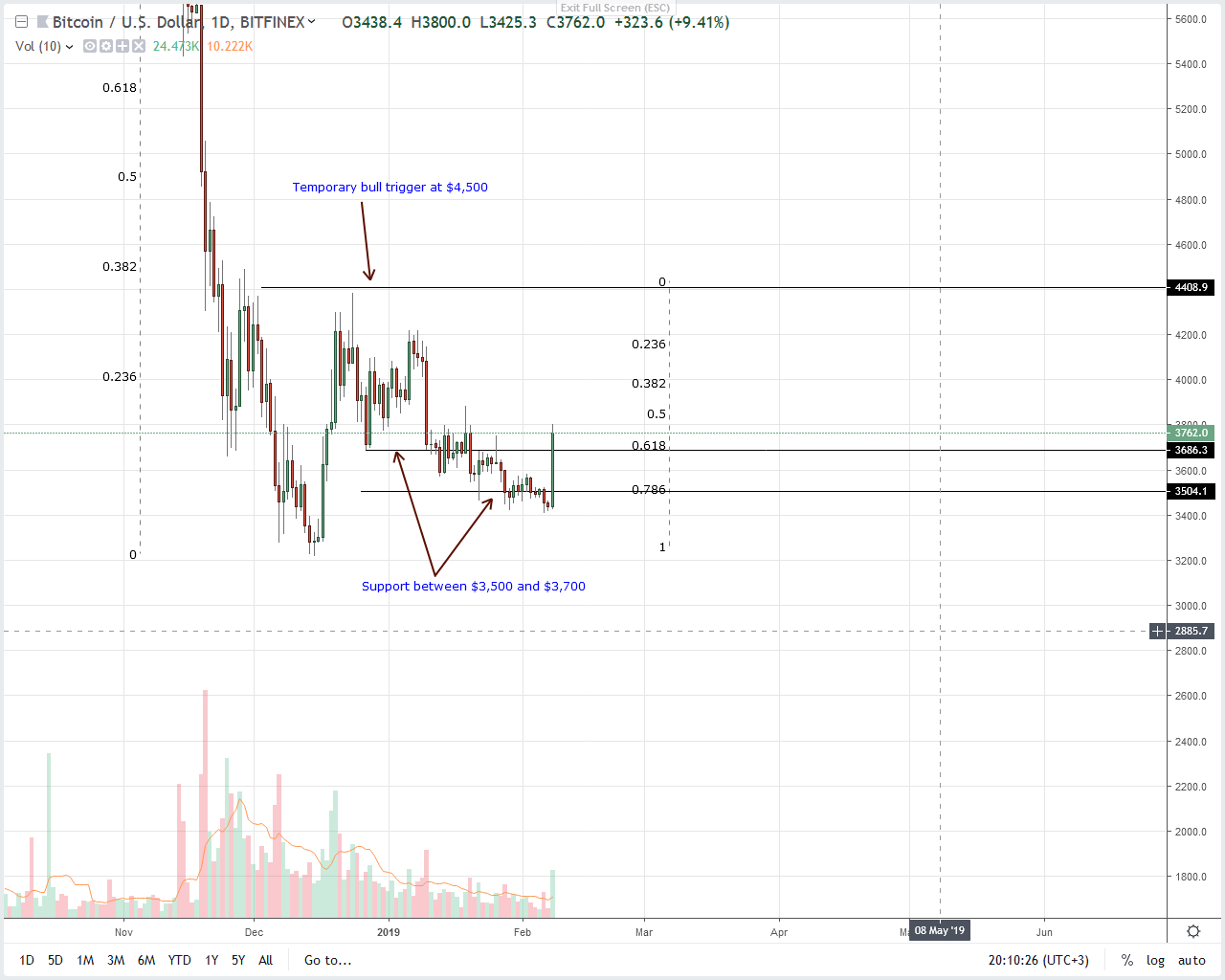 Buoyed by increasing adoption levels and the possibility of a Bitcoin ETF, BTC is clawing back losses and up 8.4 percent at the time of writing. We expect bulls to recover in days ahead and already there are hints from price action characteristics.

Despite recent losses, bulls are technically in charge—at least in the short-term, and resistance stands at $5,800–$6,000. As laid out before, our immediate buy triggers stand at $3,800 and before buyers build enough momentum activating longs, our previous stand is valid until after our trade conditions are live in line with our last BTC/USD trade plans.

Odds of higher highs mostly depend on whether there is confirmation of today’s bull bar. If there is, then those would be the building blocks for further higher highs above $3,800 and later $4,500.

As aforementioned, the aim is the complete reversal of Feb 6 losses in a three-bar bull reversal pattern ushering bulls. Powering Feb 6 bear bar were above average volumes—13k versus 10k. Therefore, a solid counter bull bar deflating bears should, first of all, exceed current averages of around 8k. Secondly, it must register high volumes above 13k.

Tags: argentinabitcoinbtc
TweetShare
BitStarz Player Lands $2,459,124 Record Win! Could you be next big winner? Win up to $1,000,000 in One Spin at CryptoSlots