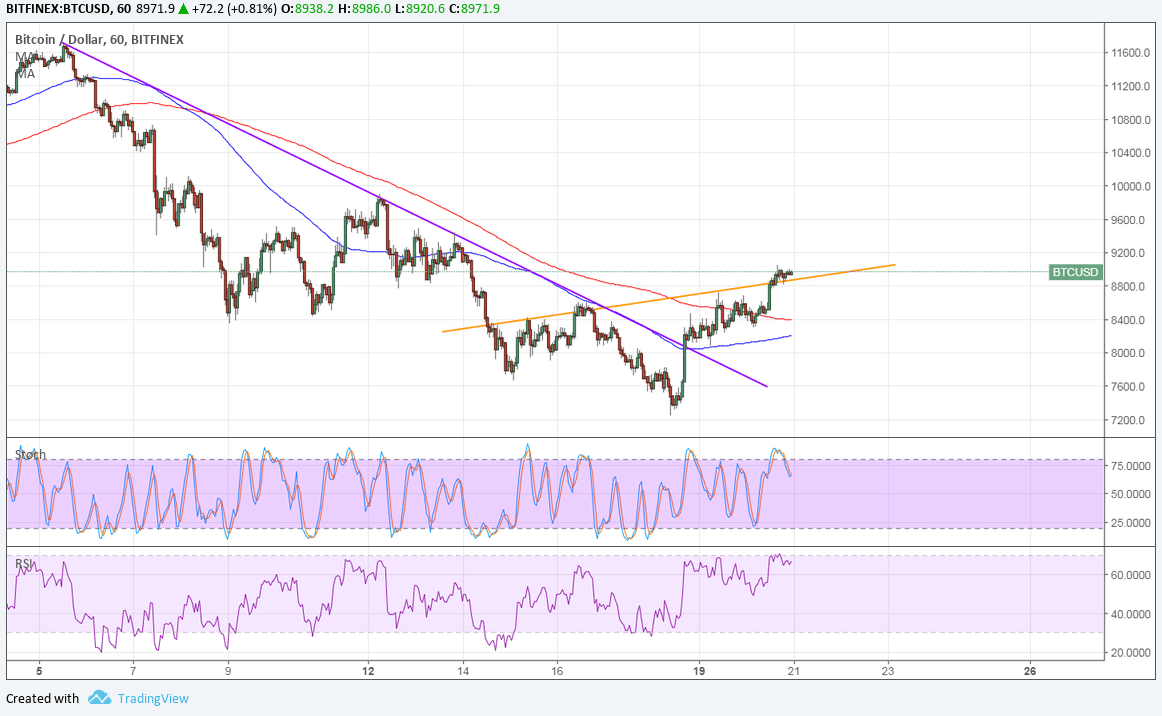 Bitcoin price is showing one short-term bullish signal after another, and this momentum could continue to build up as it breaks more upside barriers.

The 100 SMA is still below the longer-term 200 SMA on the 1-hour time frame to signal that the path of least resistance is to the downside. However, the gap has narrowed significantly to signal a potential upward crossover and a reversal.

Note that bitcoin price has previously broken past a descending trend line and the moving averages’ dynamic inflection points. It has also moved past the neckline of an inverse head and shoulders formation, which is a classic reversal pattern.

The chart pattern spans $7200 to $9200, which suggests that the resulting uptrend could be of the same height. However, stochastic is heading south from overbought levels so bitcoin price might follow suit. RSI is also turning down from the overbought region to indicate a return in selling pressure. In that case, bitcoin price might still have a quick pullback up its sleeve before gaining traction on the climb. Nearby support levels are located around $8500, $8000 and at the bottom of the downtrend around $7200. A move below these levels could indicate that the longer-term drop is resuming.

On the other hand, sustained bullish momentum could take bitcoin price up to the next major area of interest around $10,000. A move past this area could lead to a test of the key $12,000 level.

So far, there have been no negative reports from the G20 Summit when it comes to cryptocurrencies. World leaders have agreed to take a closer look at this industry but stopped short of making a strong push for tighter oversight.

Will Tarantino Be Able To Sell The Pulp Fiction NFTs? Or Will Miramax Prevail?