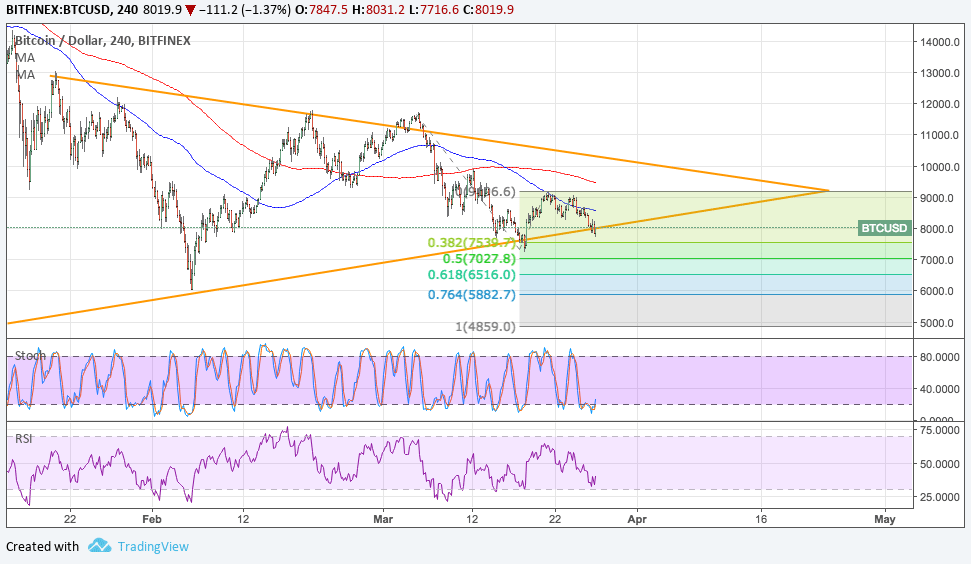 Bitcoin price is back in selloff mode as it tests the triangle support to determine whether further consolidation or a downtrend is underway.

The 100 SMA is below the longer-term 200 SMA to signal that the path of least resistance is to the downside. This means that support is more likely to break than to hold. The short-term moving average also recently held as dynamic resistance as well.

Stochastic is indicating oversold conditions and is starting to turn higher, though, so there’s still a chance that bullish pressure could return. RSI has some room to fall before hitting oversold levels so there may be some selling momentum left.

Note that the triangle spans $6,000 to $13,000 so the resulting downtrend could be of the same height. If support holds, a bounce back up to the resistance around $10,000 could be seen.

Twitter also announced that it would ban cryptocurrency ads on its platform, following in the footsteps of Facebook and Google. This could dampen investor interest and volumes, which led several traders to liquidate positions in anticipation of low volatility.

Prior this, the mood in the industry has already been pretty somber since Japan has announced plans to shut down Binance in the country and South Korea echoed the same sentiments. Combined, this would mean lower volumes worldwide as both countries account for majority of bitcoin transactions.