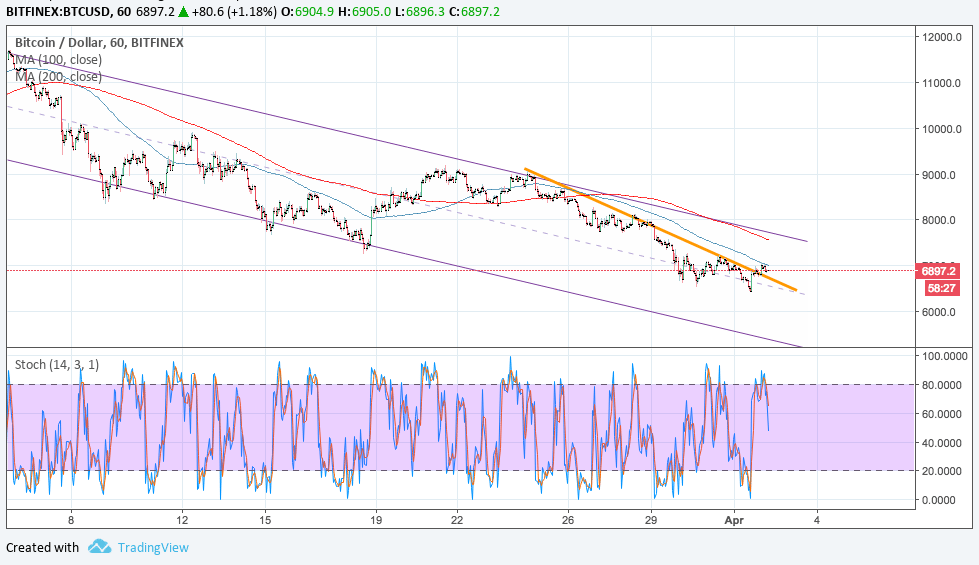 Bitcoin price is trending lower but is showing short-term signs that bulls are trying to get back in the game.

The 100 SMA is below the longer-term 200 SMA to signal that the path of least resistance is to the downside or that the selloff is more likely to resume than to reverse.

Price is currently testing the 100 SMA dynamic inflection point and if it holds as resistance, bitcoin price could make another test of the nearby support or move all the way down to the bottom of the channel. The 200 SMA lines up with the top of the channel around $7500 to add to its strength as a ceiling.

Stochastic is also pointing down to signal that selling pressure is present and that bitcoin price could head lower as well. The oscillator has room to move down before hitting oversold levels, which suggests that sellers could stay in control for a bit longer.

Bitcoin ended the previous quarter on the back foot, thanks to a slew of negative updates towards the end of the month. Among these are Google’s plans to ban cryptocurrency ads on its search engine and Twitter’s decision to ban ICO ads as well.

Meanwhile, the dollar managed to stay supported on risk-off flows stemming from trade war concerns and the Fed’s interest rate hike. The main catalyst for the dollar this week is the NFP release on Friday and downbeat results could dampen further tightening hopes.

With that, investors could continue to hold out for positive reports from the cryptocurrency industry to see if bitcoin price can be able to pull up from its dive. So far, the news hasn’t been so upbeat, with the likes of Chile and Kazakhstan taking an adverse stance against bitcoin as well.