Struggling against rampant sellers, Bitcoin is in a downtrend. In the last day, the coin is down 10.7 percent in 24 hours, but with criticism from Venezuela and Latin America, BTC could print lower in days ahead.

Social media activity is a metric that gauges impact of a product through buzz and sentiment. Analysis can reveal some interesting facts about especially in digital assets like Bitcoin where hype plays a part. In other case, it reveals what people perceive of emerging but disruptive technologies.

While the US dominate discussions around Bitcoin and cryptocurrencies in general, new studies reveal that the world’s most valuable currency is not as popular in South America as previously thought.

Struggling against inflation-and in some cases hyperinflation like in Venezuela, a new study by The Tie reveals otherwise. In a report, The Geography of Crypto Twitter: An In-Depth Look at Bitcoin, Ethereum, Litecoin, XRP, and Bitcoin Cash, of the 113,685 tweets few from Latin America were positive about Bitcoin.

Only Peru with 93.1 percent of their tweet over the seven days of testing painted Bitcoin in a good light. Interestingly, despite reports of Bitcoin’s role as a safe haven in Venezuela, citizens were openly critical of Bitcoin. An extract of the statement reads:

With the exception of Peru, where 93.1% of tweets are the positive sentiment on Bitcoin in South America is extremely low relative to the rest of the world. 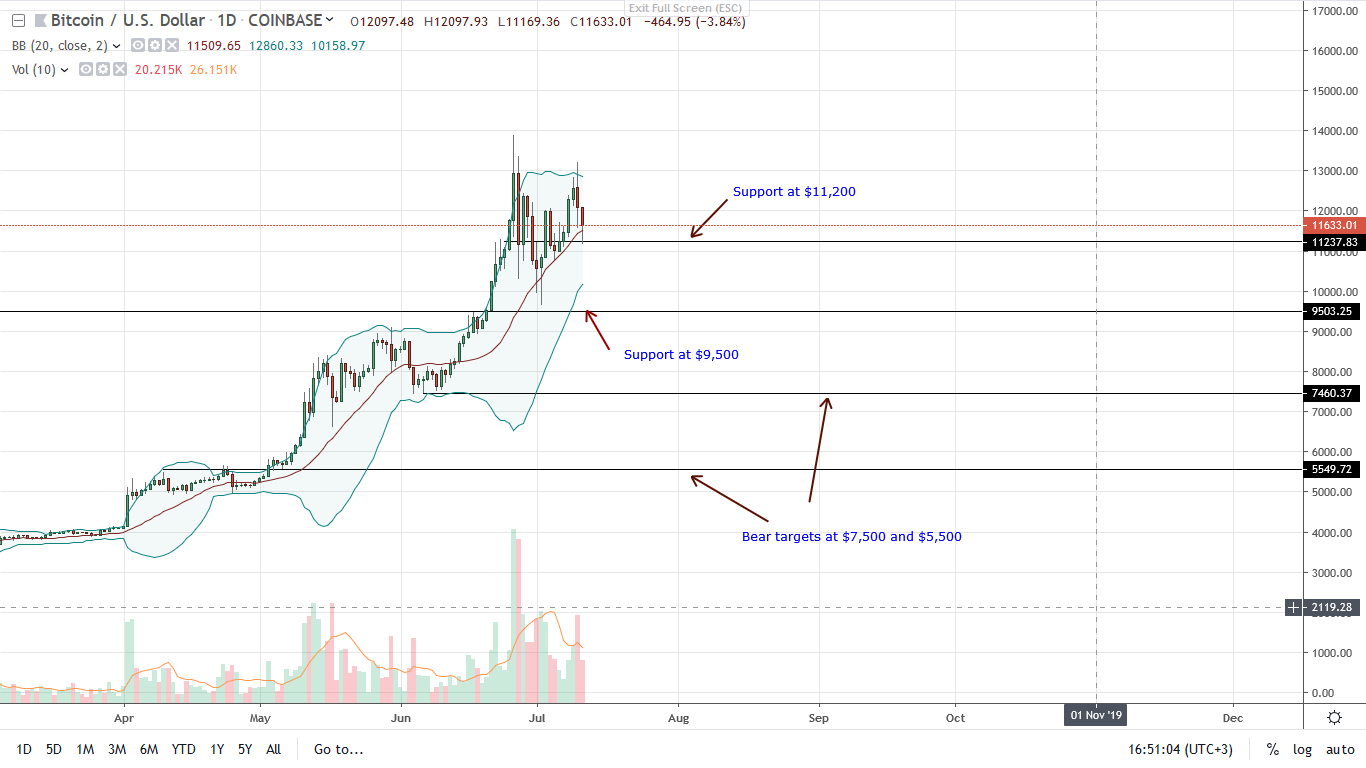 Like most cryptocurrencies, Bitcoin is under pressure. Aside from consolidating against the USD in recent days, prices are back retesting the minor support line at $11,200. Besides, it is back to the middle Bollinger Band (BB), the flexible support of the first half of 2019.

As it is, there is a weakness. However, in a more optimistic assessment, buyers will be in control assuming there is sharp rally, lifting prices above $14,000 or June 2019. Because of candlestick arrangements, sellers have the upper hand.

Therefore, while bullish, odds are BTC prices will print lower in days ahead. If there is confirmation of today’s sellers and as prices slip below $11,200 confirming losses of June 27, bears should load on pullbacks with targets at $9,500.

Affirming bears is a break and close below June 26 low of $11,200. Behind this meltdown should be high trading volumes exceeding 82k of June 26. If that prints, BTC will likely fall to $9,500 as aforementioned.

Tags: bitcoinbtcVenezuela
TweetShare58
BitStarz Player Lands $2,459,124 Record Win! Could you be next big winner? Win up to $1,000,000 in One Spin at CryptoSlots