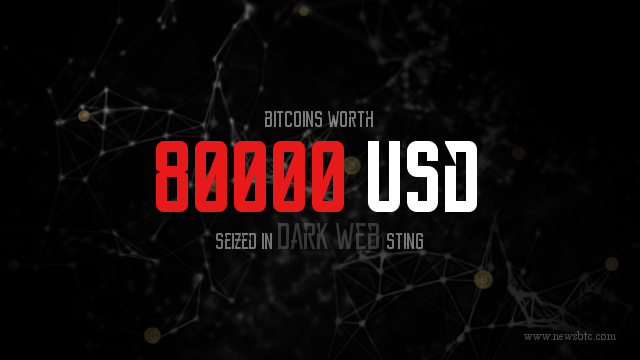 A joint media release between the United States Homeland Security Investigations (HSI), Australian Federal Police (AFP), and Australian Customs and Border Protection Service (ACBPS) has revealed that $80,000 worth of Bitcoins have been seized in a recently concluded ‘dark web’ sting.

The investigation was conducted to nab people attempting to sell/purchase firearms illegally via the underground network. Four Australians have been arrested in this regard. Globally, the covert operation resulted in a total of 17 arrests across Europe and North America, which further paved the way for seizures of firearms, ballistic armor, illicit drugs, and $80,000 in the digital currency.

The anti-national arms trade was being run by a US-based seller using an online alias to clients all over the globe. In September 2014, the HSI identified a 33-year old Montana resident as the operator of the online alias account.

Acting special agent in charge of HSI Newark Kevin Kelly commented that the six-month joint operation should “serve as a warning to those who capitalize from the use of underground websites.”

“HSI will maintain its unrelenting commitment to secure land borders as well as virtual borders from individuals seeking to prosper from the sale and/or purchase of firearms, drugs, and other illicit items with little regard for national security.”

The operation was fully supported by the Queensland Police Service and other law enforcement agencies of those Australian states which were directly or indirectly involved in the illegal arms trade.

ACBPS National Director Investigations, Assistant Commissioner Steve Lancaster said that “this was the most successful dark net firearms investigation conducted in Australian history, and that the arrest of the US based supplier had removed a significant firearm threat to the Australian border.”