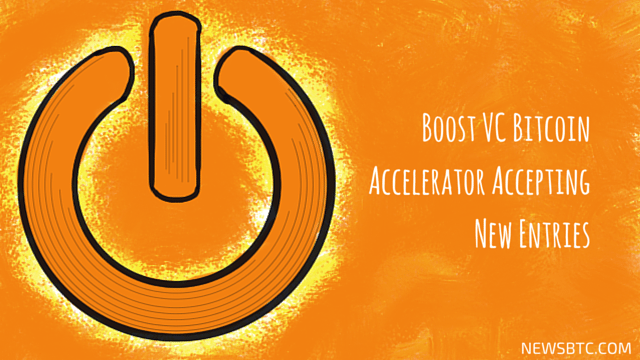 Boost VC, which is known for funding bitcoin startups and fintech companies, is now accepting new entries for its 3-month program. Entries can be submitted through this page until the November 30 deadline for its Tribe 7 February start date.

According to its About page, Boost VC is the “Before-the-Chasm” startup accelerator. The company has been around since 2012 and has been busy finding and funding passionate entrepreneurs who are using emerging technologies to build great ideas. The sectors they pay close attention to are digital reality and bitcoin technology, which they believe to have the biggest world-changing potential.

Through their bitcoin accelerator program, participants will be immersed in an entrepreneurial environment with committed and dedicated mentors. In addition to unique team-building exercises, they will also be scheduled to interact with industry leaders and investors.

Furthermore, companies will have an initial seed investment from Boost VC, along with general legal counsel. After all, the bitcoin industry has been undergoing several regulatory changes, particularly in states like New York and California.

Aside from that, companies can be granted housing and office space in Silicon Valley itself, along with a dedicated Boost team that can work alongside the bitcoin startup.

As of this writing, Boost VC has already invested in a hundred companies and are currently recruiting for their Tribe 6 program. Founder Adam Draper himself is an avid blockchain and VR enthusiast and has previously invested in 20 companies, including Coinbase, Plangrid and Practice Fusion.

According to data from Pymnts.com, Boost VC has been able to provide a total of $52 million in funding for blockchain startups. Blockchain refers to the distributed public ledger of bitcoin transactions stored and updated by a network of computers in a process known as bitcoin mining. This particular technology has garnered the attention of major global banks for its potential applications in the financial industry.