Though there was a bit of stability yesterday, the decline would continue. First we expect BTC/USD to pull back ideally towards the $5,000–$5,500 before bear trend resumes. As we have seen, price drops are affecting chip-set manufacturers, investors and crypto payment processors as enthusiast refrain from spending BTC.

That the market is plunging is true. But while the bear plunger threatens to drive prices to new lows, the side effect has been disastrous not only for ordinary hodlers but for businesses that help boost the network’s infrastructure driving adoption. Recent earning reports from chip-set manufacturers as Nvidia hint of caution as miners switch off their rigs. At the same time, crypto payment processors as BitPay are witnessing a drastic stop in crypto related payments.

Interesting Read: No, Jamie Dimon and Warren Buffett Won’t Have the Last Laugh on Bitcoin

According to an in-depth report by blockchain analysis firm Chainanalysis, transaction volumes shrunk from $427 million in December 2017 to $96 million by end of Q3. That’s a massive 80 percent drop and seem to follow the general market trend which is also down 80 percent from 2017 peaks. After surveying 17 payment processors including BitPay and Coinpayment, the research firm noted that there is a slow but steady decline in incoming and outgoing crypto transactions.

Even though specific data that maps out the performance of Bitcoin transactions are patchy, it’s likely that the path is most likely the same. At Coinpayment for example, transactions halved between January and October.

However, while the slump continues there was is a marked increase in the number of Lightning Network related transactions. Currently, the Bitcoin LN has a total capacity of 432.71 BTC powered by 4,123 full nodes—up eight percent with 12,000 live channels.

Several analysts and crypto commentators as Joni Teves–a strategist at UBS in London reckon that for widespread adoption of BTC as a reliable medium of exchange addressing and implementing scalability solutions should be top priority. This is why the success of LN as a scalability solution fronted by Blockstream is important. 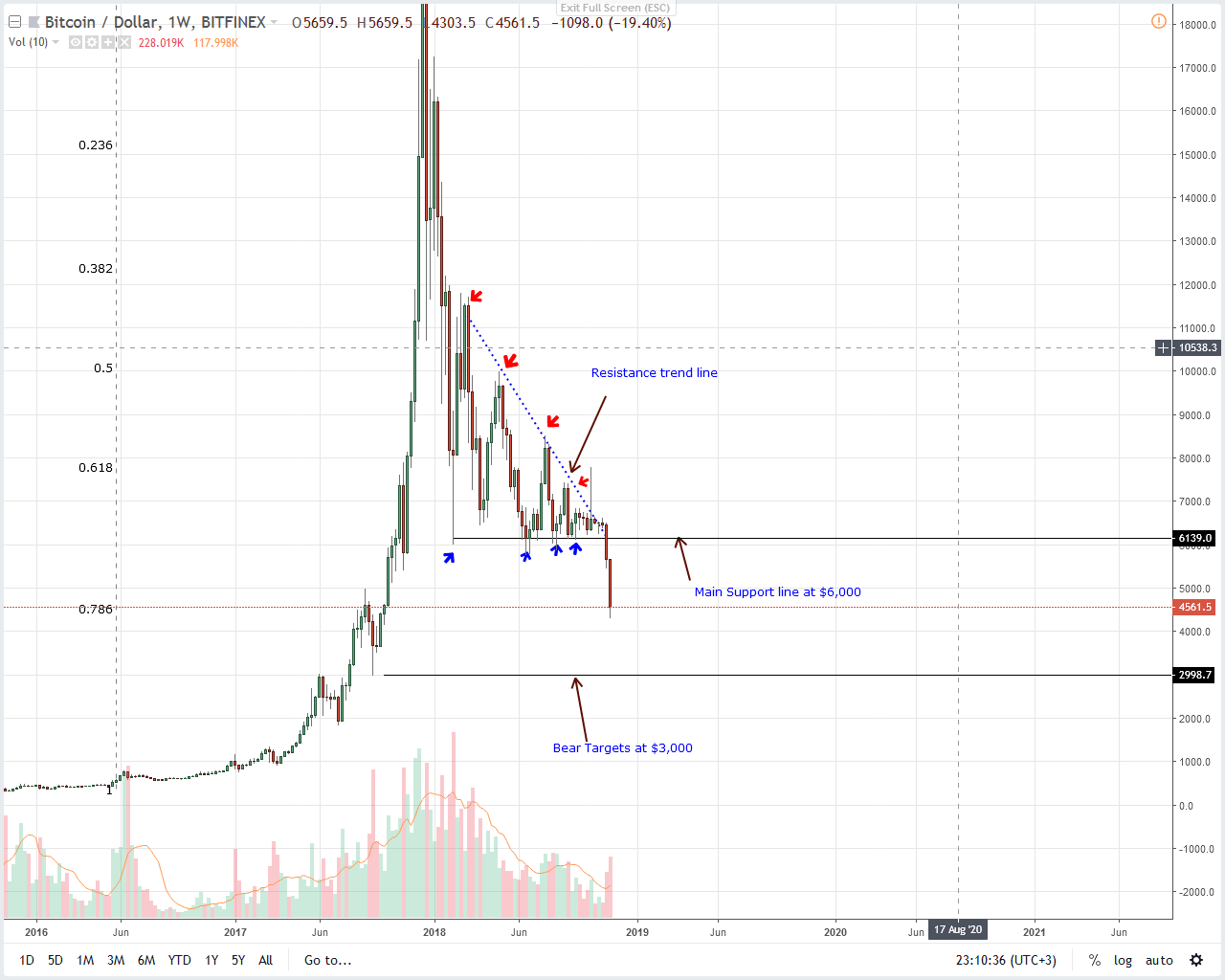 Despite its deep liquidity, BTC/USD is one of the worst performers in the last week. It is down 30 percent and as the slide continues, it is lights out for Bitcoin bulls.

Simply put, candlestick arrangement combined by fundamental factors—declining adoption levels will most likely draw some liquidity from the market and this could have adverse effect on spread which in turn affect entry or exit positions discouraging capital injection.

But as it is, BTC/USD is trading within a bear breakout pattern and with a full candlestick bar printing below the $5,800, sellers are in charge. Although prices are now trading below $4,500 meaning our first targets have been hit, we recommend holding off from shorting and instead wait for pullbacks in line with our last BTC/USD trade plans. 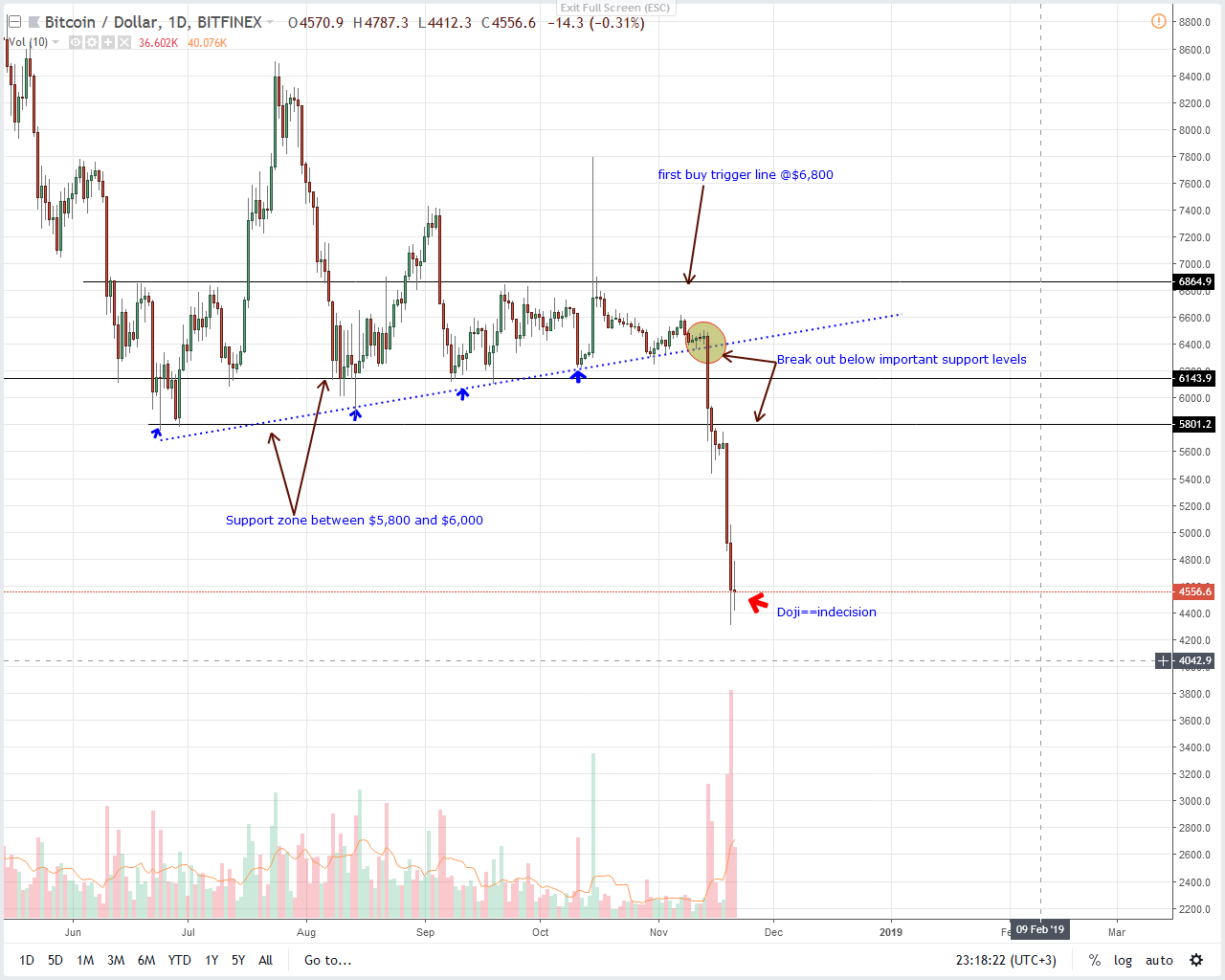 Even as bears rage, there is reprieve for coin holders in lower time frames. For one, there is a slow down and yesterday did close within Nov 20 bar but that doesn’t mean buyers are in charge. Instead considering the general candlestick alignment and the doji bar of yesterday, selling at spot is a bit risky that is why picking off sell signals in lower time frames preferably at $5,000–$5,500 region is ideal.

Like yesterday, fitting stops will be at the $5,800–$6,000 immediate resistance. Thereafter declines could drive BTC prices to $3,000 or lower.

Conversely, gains above $6,000 nullify this bear projection and as long as there is high trade volume accompanying this resuscitation, then odds are BTC would expand towards $8,500 by Q1 2019.

Tags: Bitcoin price analysisbitpayBTC/USD Price Analysislatest bitcoin newsLightning network
Tweet123Share226ShareSend
BitStarz Player Lands $2,459,124 Record Win! Could you be next big winner? Win up to $1,000,000 in One Spin at CryptoSlots