Ledger Nano S now supports Cardano (ADA) after Yoroi’s integration with the hardware wallet maker. Because of their superior market share, Ledger’s support is beneficial for ADA since more users would be willing to invest and securely hold their assets. Meanwhile, increasing demand could further drive Cardano (ADA) prices above 9.5 cents towards 20 cents.

Holders of Cardano (ADA) can now purchase Ledger Nano S and confidently store the coin’s private keys, Emurgo and Ledger have announced. The integration began yesterday after Emurgo, the business wing of the Cardano triage, said Yoroi, the native wallet of ADA, was now supported by ledger devices.

“Ledger, a leader in security and infrastructure solutions for cryptocurrencies and blockchain applications, and EMURGO – the official commercial arm of Cardano, the first peer-reviewed third generation blockchain – are excited to announce full integration of Cardano’s ADA with the Ledger Nano S.”

No doubt, this is a step in the right direction and cements Cardano’s figureheads drive towards making the smart contracting platform mainstream. As the first peer-reviewed and innovative platform, the projects aim is to dislodge Ethereum through a scalable and secure network where quality over quantity (of development and code) is always a top priority.

Besides, while this integration secures user interest, it also reveals Cardano’s preferences. Ledger is a de-facto leader and since inception, it has sold more than 1.5 million devices. Furthermore, it is also the only wallet with certification from the thorough French Cybersecurity Authority, the CSPN. 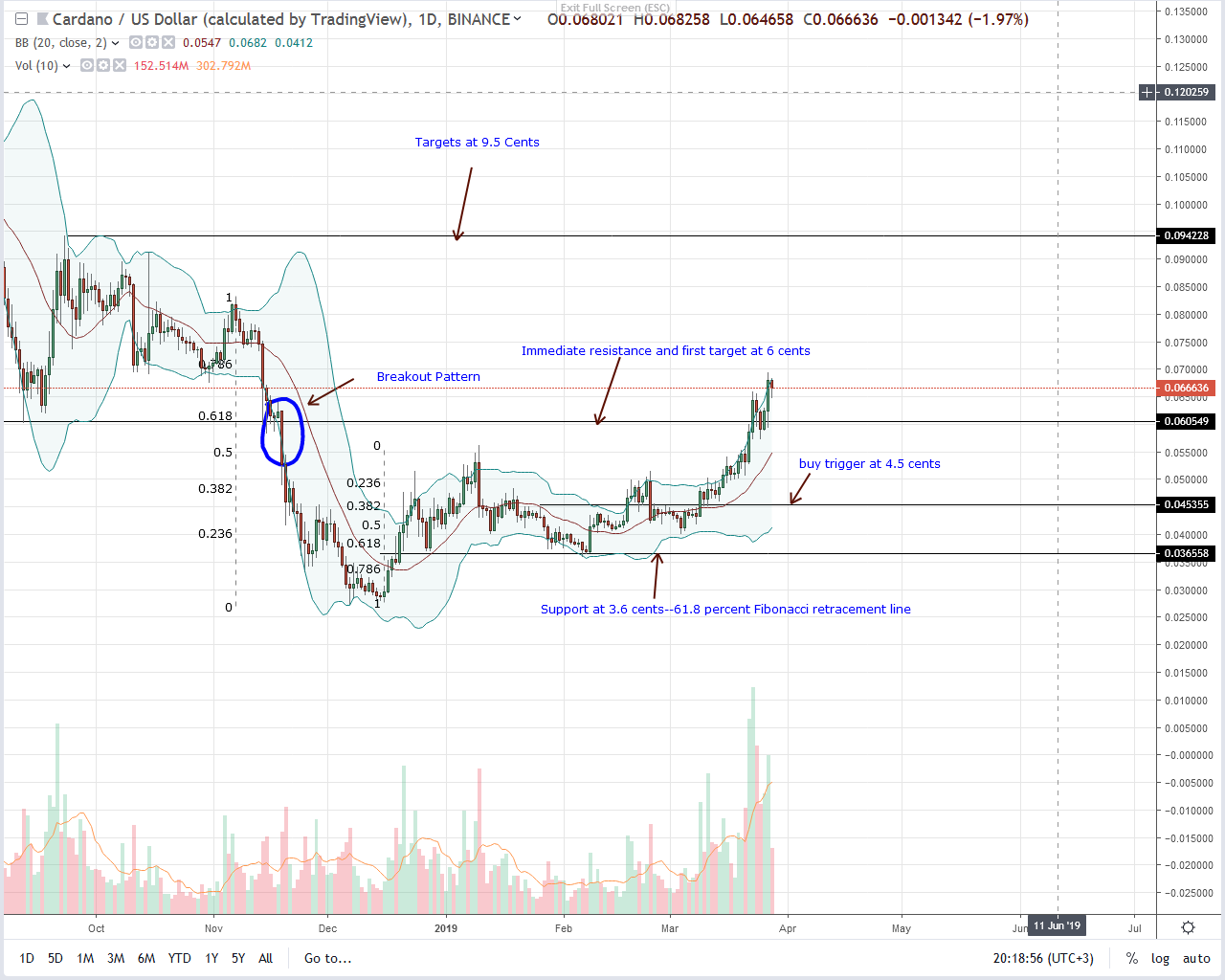 At the time of press, Cardano (ADA) is ahead of the pack, outperforming other assets and up 23 percent from last week’s close. It is the ninth most valuable coin, closing in on USDT and Binance Coin. From candlestick arrangement, we expect ADA to add to their gains.

Not only is it trading within a bull breakout pattern after clearing the 4.5 cents resistance level but accompanying volumes are highs. Because of high participation, BB is widening. Besides, ADA bull bars are banding along the upper BB meaning momentum is equally high favoring buyers.

As a result, every low should be a buying opportunity. The ideal first minor target should be Q2 2018 highs at 9.5 cents.

As prices edge higher, transaction volumes should exceed Mar 23 average of 231 million. It is no doubt that sustained volumes would easily propel prices to 9.5 cents.