Props, an ERC-20 token, is compliant with a key regulation. As a result, investors can have a financial stake in the issuing company following SEC qualification. As of the time of writing, bears are in control after the July 11th’s breakout below the main support trend line.

Well, it appears as if blockchain is not immune from politics. The disruptive platform may have a global reach, but recent comments from President Trump, for example, is amplifying public curiosity.

While digital assets are resilient with no point of weakness, jurisdiction-specific laws bind project launching on Ethereum or similar platforms. That is the precise reasons why a candidate vying for a Congress seat in Florida Omar Reyes is seeking approval from the U.S. Election Authority.

His idea is to issue an ERC-20 token, the Omar2020, in a bid to incentive volunteers on his campaign trail. A report by CoinDesk reveals that Omar’s team sent a letter to the Federal Election Commission (FEC).

“Our offering of Props is the first consumer-facing offering of ‘Howey tokens’ to be qualified by the SEC. It makes it the first offering of consumer-oriented utility tokens that the SEC deems compliant, outside of Bitcoin and Ether.”

“We used Regulation A+ (Reg A) for this qualification, so that Props may be earned by, and provide the functionality to, non-accredited investors, users, apps and validators, in compliance with U.S. regulations.” 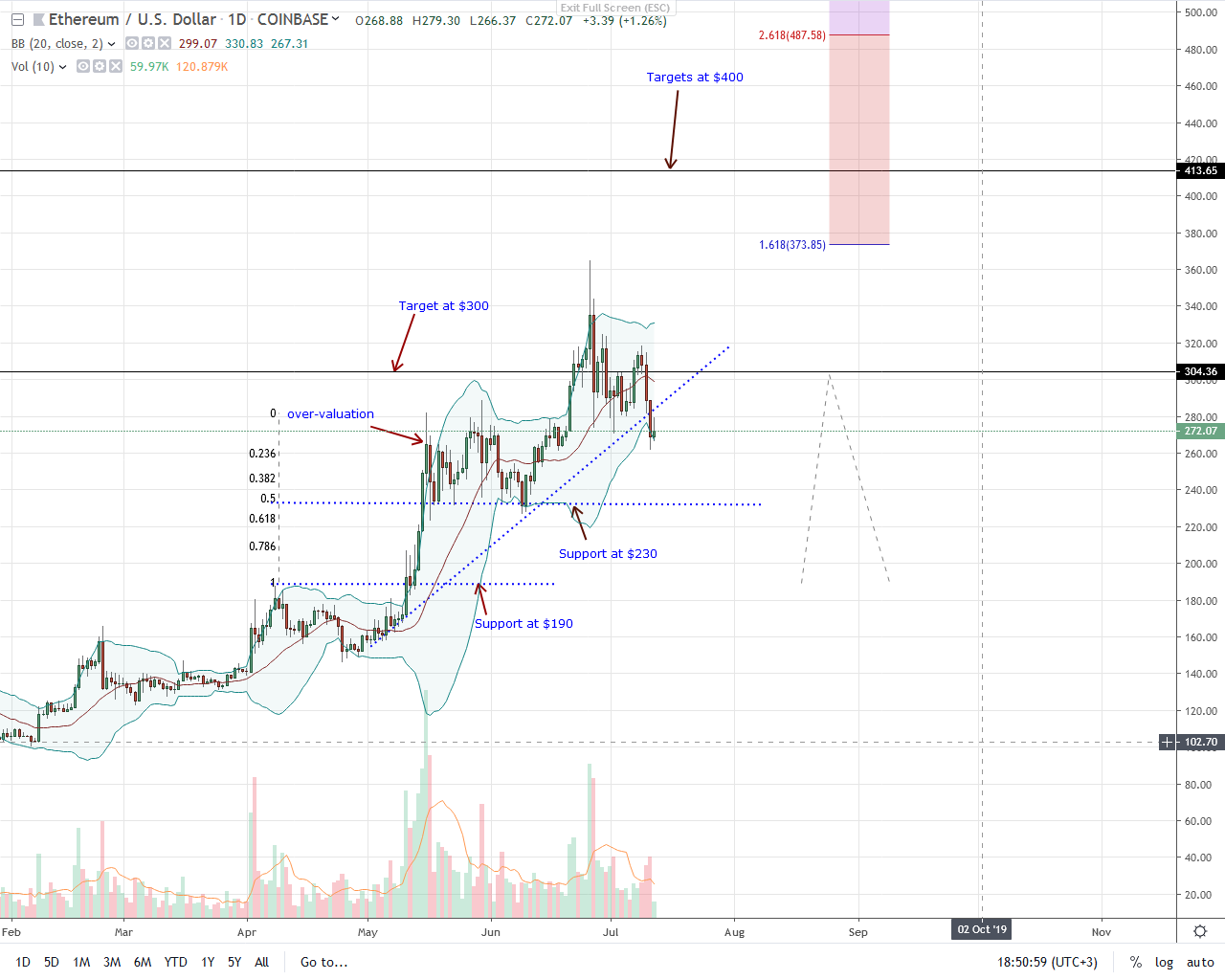 Unlike Bitcoin, which is stable and trading above critical support levels, ETH is vulnerable. While fundamentals are bullish, the fact that prices are now trading below two levels of support is bearish.

That divergence alone means that in the medium-term prices may recover. However, for now, sellers are in the driving seat. Because of yesterday’s draw down confirming June 26 and 27 double bar bear reversal pattern, bears have the upper hand.

As such, every high is technically a selling opportunity with the first target at $230. Note that behind yesterday’s break out is increasing trading volumes cementing the outlook from this trade plan.

Anchoring this trade plan is July 12th’s bearish candlestick. It is conspicuous as it breaks below the main support trend line with above-average trading volumes of 220k against 137k. To sustain bears, it will be ideal that further losses be with increasing participation revealing sell-offs in lower time frames.