Vitalik has an audacious plan of integrating Ethereum with Bitcoin Cash before ETH 2.0 full activation. However, there is resistance from some quarters with a majority against his idea. In the meantime, bears are in full throttle as ETH slumps 34 percent from last week’s close.

Regardless of how Ethereum supporters try to scrutinize the platform’s performance, everything will boil down to scalability. Striking a perfect balance and ticking all the boxes satisfying the requirements of the blockchain trilemma is hard.

Therefore, while the developer community agitates for scalable networks, it all about making good choices. Presently, Vitalik and team chose decentralization and security over scalability. Limiting as it is, that is not stopping project managers from flocking and launching dApp from the platform. And Joseph Lubin, in an interview, said the network, despite challenges, has to some extent scaled:

“So, I think we’re at many tens of thousands of decentralized transactions per second on the Ethereum network right now. And another point that I believe is that we’ve got all this scalability for specific use cases.”

Therefore, the idea that Vitalik is putting forth is off-putting for Ethereum developers. While it could work considering Bitcoin Cash recent hard forks and their working towards inherently scaling the network without layer two options like in Bitcoin, his choice didn’t bode well with developers. Francis Pouliot said Vitalik’s proposal is an admission of failure:

“The shitcoin has hit a three-year low versus Bitcoin. The founder has all but declared the project a failure today by proposing a humiliating BCash integration to delay the (yet unsolved) scalability crisis.” 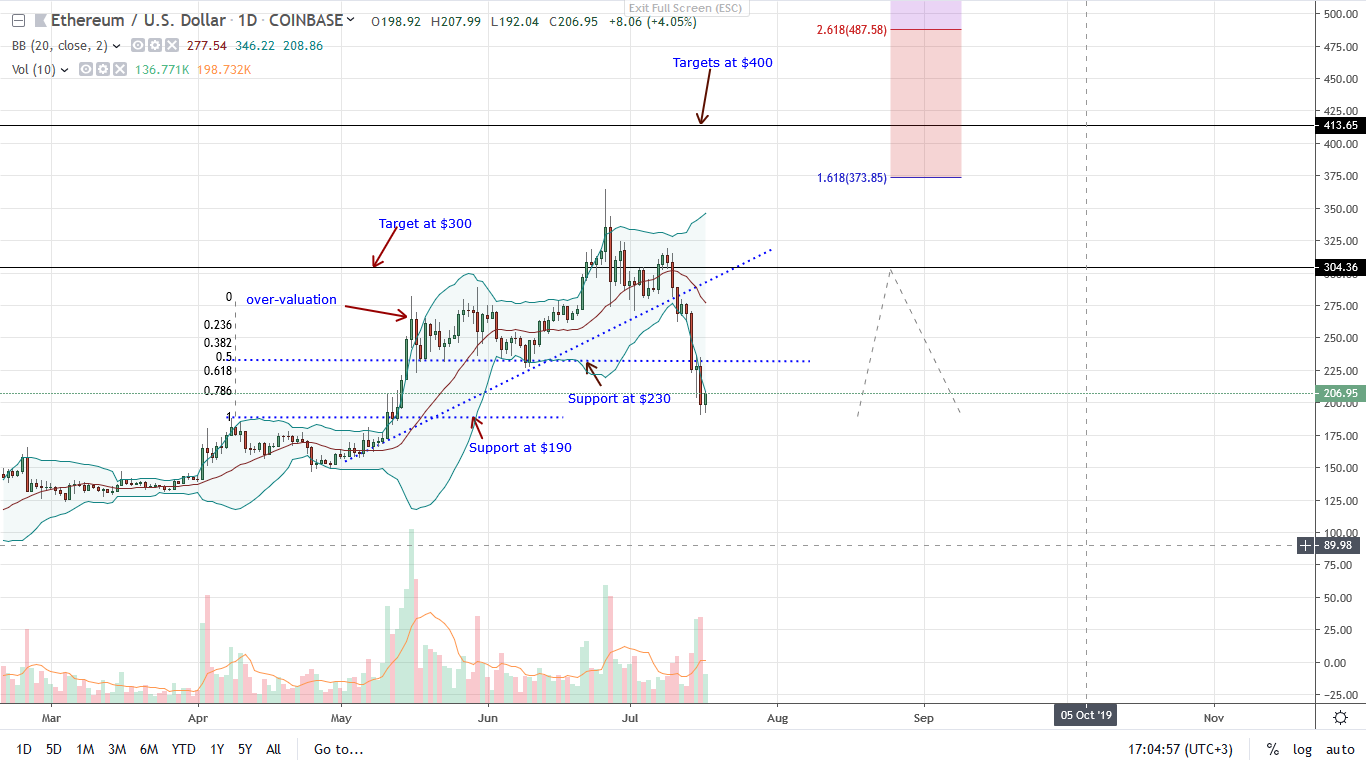 Presently, the cryptocurrency scene is all red. Leading the plunge are periphery altcoins. Compared, ETH performance, considering its liquidity, is worse. Printing double-digit losses in the last week, bears are firmly in charge.

Note that despite the optimism, the fact that prices are now trading below the $230 support and sell trigger is a mark of bears. As such, and in line with previous ETH/USD trade plans, every pullback towards $230, which is previous support now resistance, is an opportunity to unload the coin at higher prices.

Ideally, and in a typical move, better reloading opportunities will be at $190 and $150 if sellers’ momentum is high.

Anchoring this trade plan is May 16 bull candlestick. With high trading volumes of 822k, the bar is visible and leading. Therefore, signaling the end of a retest will be a wide-ranging bull candlestick reacting either at $170-$190 support zone or $150 which is April low, distinct with high participation preferably exceeding 822k of May 16.

Tags: Bitcoin CashETHethereumVitalik
Tweet123Share222ShareSend
Win up to $1,000,000 in One Spin at CryptoSlots