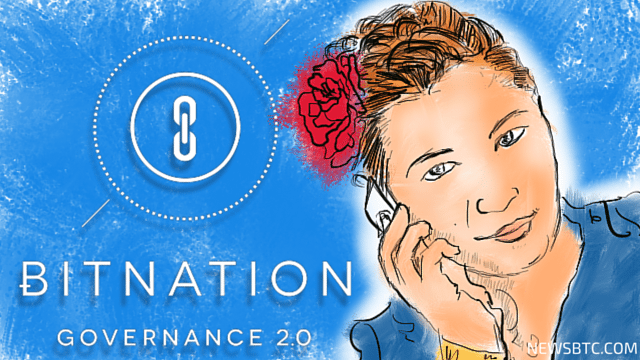 Exclusive: An Interview with Susanne from Bitnation

Bitnation was recently in the news for assisting European nations to process the refugees entering Europe and providing support to these refugees as well. We caught up with Ms. Susanne Tarkowski Tempelhof, the founder and CEO of Bitnation to know more about the organization, projects they are currently involved in and her future plans for Bitnation.

NewsBTC:  Please tell us a bit more about Bitnation

NewsBTC: How did the idea originate, and how far has it been scaled till now?

Susanne: I’ve been thinking about it for about a decade. My father was stateless, and I’ve always thought it was bizarre that just by the virtue of having been accidentally born somewhere, we would be limited to choosing one governance service provider. I started to write about it back then – non-geographically contingent governance service aggregators – but like most people, I thought it was too insane of an idea, and to ‘change things from the inside’ was more realistic. Hence, I started working for other governments instead, in various conflict zones, for 7 years, until I progressively realized that not only did we not change very much, but the changes we did were often for the worse. Then Bitcoin came along — a perfect representation of an international technology not controlled by any government — which inspired me to give the idea another shot, first through talking and writing about it – I called it the Googlement back then – and finally through creating it: Bitnation.

NewsBTC: What is the big plan you have for Bitnation?

Susanne: As I outlined in my TEDx Talk 2012, my vision was to see a world of thousands or millions of nations competing through offering better services, rather than through the use of violence. Bitnation aims to be a prototype for that, in the same way Bitcoin is a prototype for cryptocurrencies. Everything we do is 100% open source code, so anyone can fork it to create their own nation. We’re trying to build a solid backbone that empowers others to start their own variations of it, the most important components being the ID and Dispute Resolution system.

NewsBTC: What made you venture into Bitnation, and is there a connection between Bitnation and bitcoin?

Susanne: About 3 years ago, late 2012, I decided to make a reality of my long-time dream. I had reached a moment in my life where I no longer thought the current system was ethical or sustainable, and a level of personal fatigue of trying to change things through a government I no longer believed in, or even liked. Initially my vision of it was more similar to that of an international insurance company, of sort, providing more services than just health insurance, but also things like security, education, etc. – through networks of local subcontractors. Starting that would have been immensely challenging, because it would require so much financial backup from large banks or whatever. So I decided to start with writing a book about it first to explain the idea, and start the nation afterwards. But during the course of doing research for my book, I stumbled across a blog post called Lex Cryptographia, about dispute resolution on the blockchain, and then a few weeks later I heard about Decentralized Autonomous Corporations (DACs), and then I discovered Ethereum, CounterParty, Coloured Coins, NXT etc., and within a few months I realized I could do basically 75% of everything I had planned to do, but through the blockchain technology instead, cutting out nearly all start-ups costs. Hence, I decided to just do it, and write about it after the fact, instead.

NewsBTC:  Can you share a few instances where Bitnation has been used so far?

Susanne: We did the first world citizenship on the blockchain, the first marriage, birth certificate, land title and Emergency ID. Our public Alpha (bitnation.world) is still on testnet so we don’t have any actual users now, we’re still testing it and improving it to make sure it’s secure. To date, our largest adoption right now has been for the refugee emergency services we’ve set up to respond to the current refugee crisis in Europe.

Through using extremely simple technological means, we set up an Emergency ID to prove family links (because family links gives people the right to apply for Asylum in different countries). The ID is free, generates a QR code, and is timestamped on the blockchain. Then we’ve added additional services such as a Bitcoin VISA Debit Card, since they’re basically all unbanked in countries where digital payment systems is the standard, and a map and a forum to track lost family members, safe locations, dangerous locations, etc.

The initiative – Bitnation Refugee Emergency Response (BRER) – has quickly gained popularity, as it’s one of the peer-to-peer options available while governments finds themselves in a political deadlock, incapable of action.

NewsBTC:  Can you please tell us more about your team?

Susanne: We have an incredible team consisting hundreds of volunteers from all over the world. Watching the openness and creativity of the community has been nothing short of humbling. On our Slack chat people present their visions and ideas, and groups forms spontaneously around them, everyone adding value in different ways, whether it’s through coding, or marketing, or just critical thinking and ideas. It has truly restored my hope in humanity.

Susanne: In the short term, what we’re trying to accomplish is: 1. Creating a better Open Source development environment, mainly through creating better documentation. 2. Take the Alpha to Beta, through incorporating the two most important functions; a good ID system, and a dispute resolution system (along with UI/ UX improvements, naturally) 3. Continue to help refugees, and improving the services, as it’s the most currently urgent problem and 4. Go full Decentralized Autonomous Organization (DAO) through providing more capable structures where anyone can just join, add value, and be reimbursed for it. Those are the short term goals (1-3 years). I have already mentioned our long term goals while answering the first question.

NewsBTC: How have the governments and other authorities reacted to Bitnation so far?

Susanne: We’ve been approached by several governments who are interested in using the blockchain technology for themselves. We’ve always had a standoff-ish attitude to that, as our aim is to provide voluntary DIY solutions, not one imposed top-down by governments. You know, rather create Uber or Bitcoin, than lobby the Government backed Taxi cartels or the FED to ‘change things from the inside’.

“You never change things by fighting the existing reality. To change something, build a new model that makes the existing model obsolete.”

NewsBTC:  What are the challenges faced by Bitnation in today’s world?

Susanne: The main challenge as I see it, is to explain how the Bitcoin and blockchain technology works. We try to explain it in very simple ways, using familiar terms – such as a decentralized database and a public ledger, like an international public notary secured by cryptography, etc. People understand it, but it’s still so new, so it takes time for people to realize how easy and efficient it is. To many people, it sounds ‘too good to be true’ type thing.

I believe the best way to communicate it is simply through making people use it in easy, practical ways. Our Emergency ID is one of those ways. We’re very focused on UI/ UX, and market adoption, which we believe will add significant value to the cryptocurrency ecosystem as a whole.

NewsBTC:  Funding status? Have you raised any funds so far? Any future plans of fundraising?

Susanne: Even though, like many other projects in this space, we were unfortunate enough to get attacked by a handful of nasty trolls when we did our initial crowdsale a year ago, more than 200 individuals invested in Bitnation. We’re very grateful for the confidence, and we’ve done everything to produce the most out of those funds. But now it’s the time to take the initial Alpha to a Beta level, and test it on the market. Because adoption rates, by the end of the day, is what matters.

NewsBTC:  Has Bitnation entered into any partnerships so far? What about in the future?

Susanne: We’ve partnered with Horizon and the Blocknet, which has provided us with a lot of support, they’re two great organizations we truly enjoy working with. We’ve built on the Horizon technology, while Blocknet will permit us in the future to move seamlessly between different blockchains. We’re working on a few other partnerships as well, which will be announced in the next months.

Susanne: We’re always open to new contributions, team members, and partners. In the DAO spirit, we welcome (nearly!) everyone — when I say nearly, I mean people who add value, not people who subtracts value – to the mission as a whole. Hence, if you feel inclined, please sign up to our team on our website bitnation.co, join our slack chat to contribute with your own ideas, or become an ambassador getting down and dirty with solving social problems in your own area. Forward thinking tech-optimist mavericks are especially welcome. And if you got JS skills, you’re WANTED!

Tags: bitnationBlockchain TechnologyColoredCoinscounterpartyethereumInterviewsLex CryptographianewsbtcnxtSusanneTEDx
Tweet123Share196ShareSend
BitStarz Player Lands $2,459,124 Record Win! Could you be next big winner? Win up to $1,000,000 in One Spin at CryptoSlots