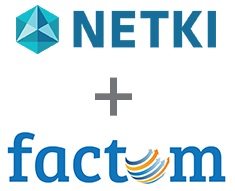 If there’s one thing Bitcoin doesn’t need, it’s to be more complicated. By adding a new data layer on top of the blockchain, some believe Factom to be doing just that, introducing features a small minority of the population will understand.

Their latest partnership with Netki is an attempt to address the issue. Most of Factom can run in the background out of sight, but Factom addresses are still around 70 characters long. Now they’ll be a simple username.

Netki’s slogan is “Making Digital Currencies Human.” It lies on the outermost layer of the blockchain, where mainstream users reside. Instead of a long string of characters like Bitcoin, it lets you reserve alphanumeric usernames, which are easier to look up and send money to–they use wallet.TonyStark.bit as an example.

Netki uses the Namecoin blockchain to register names to Bitcoin addresses, as well as Litecoin and Doge. To protect your privacy, it generates a seed using an HD wallet, and generates a new address for every transaction. It also uses a system similar to SSL (the lock next to a URL at the top of your web browser) to verify you’ve got the right person when sending funds.

This puts Netki in a growing class of Bitcoin companies: identity-based services on top of the blockchain. ChangeTip has become popular by allowing users to send small amounts of BTC via Twitter, and claiming your Onename has become a mild techno-fad. Netki can be integrated into any wallet service, so many of those companies will become partners (ChangeTip already is).

It’s important to rely on decentralized infrastructure, but not everyone has to interact with it directly. The Factom application is effectively packaged within any wallet on the Netki network, allowing the easy utilization of all of its functions. They’ve taken special care to ensure that an understanding of the Factom protocol is not required.

Users can send Factoids to one another using a Netki-enabled wallet just like other cryptocurrencies, and redeem them directly for Entry Credits. If you don’t want to dabble in Factoids at all, you can also buy them directly with bitcoins. Netki then sends your BTC to the Factom storefront, which generates a new Entry Credit private key, converts an equivalent (minus fees) amount of Factoids, and assigns them to your address.

To outsiders, you remain completely anonymous, thanks to Netki’s HD wallet scheme. The DNSSEC system ensures that the name you’ve entered forwards to the correct Factoid address–this is Factom made simple. As Nekti acquires more partners, it will be available on more wallets, as well.

CORRECTION 14/04/2015: this article has been amended to correct a misconception by the author. Netki does not make or provide a cryptocurrency wallet–it is a feature than other wallets can choose to integrate.

Tags: bitcoinBitcoin newsblockchainBlockchain TechnologychangetipFactoidsfactomnamecoinnetkiNewsonenameProductsproof of existence
Tweet123Share196ShareSend
Win up to $1,000,000 in One Spin at CryptoSlots