The direct correlation of hash rate with prices means Litecoin network is secure as miners funnel their computing power searching for profit. At spot rates, the coin is up 3.6 percent and bouncing off the middle BB as buyers flow back.

Cumulatively, the market is on the rise after last week’s correction. Spearheading this bounce is Litecoin (LTC) which is up 3.6 percent in the previous day but still down 11.1 percent from last week’s close. To project that Litecoin (LTC) would lead others would be concluded as a pipe dream some few months ago. However, after a solid Q1, yesterday’s bounce off $75 together with the recovery of Bitcoin Cash (BCH) did add around $5 billion in a possible trend reversing move.

Nonetheless, what is attractive is the steady rise of Litecoin’s hash-rate. History shows that hash-rate do rise with prices. Therefore, at spot rates, Litecoin is up to 4X from Dec 2018 lows. Even so, we expect Litecoin to edge higher thanks to its direct coupling with Bitcoin which has much attention after last week’s close above $5,000 as well as other fundamental events like Litecoin halving scheduled at Aug 6, 2019.

Per design, Litecoin halves every 840k blocks. After this cycle, miner rewards will drop 50 percent from 25 to 12.5 LTCs. It is the scarcity that follows this event that analysts insist will drive the next wave of higher highs towards $150 as LTC bulls flow back rewarding hodlers. 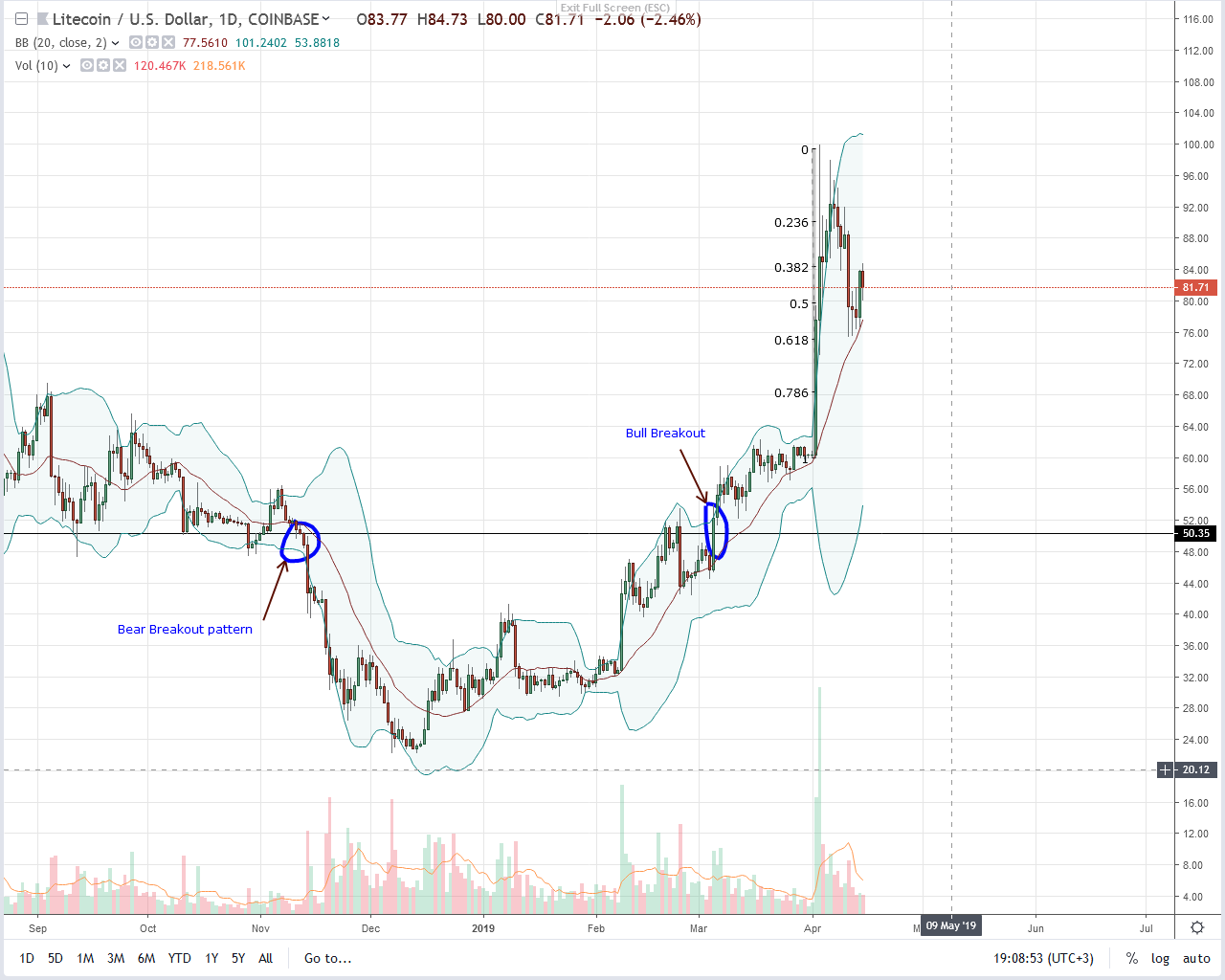 From the chart, the path of least resistance is up, and Litecoin (LTC) is leading the expansion wave invalidating the bear breakout pattern of late 2018. Expectedly, after the crypto winter when the network lost nearly 90 percent of its value, a correction was on the cards, and it is in progress.

Trading above $50, bears of Q4 2019 are no longer in control and as long as prices steady above $75 with the middle BB—or the 20-day MA acting as flexible support—the there is more room for upsides above our immediate resistance at $90.

Besides, note that from an effort versus results point of view and the failure of bears to drive below Apr-2 close, buyers are in charge. April-14 bar did cement this now that we have a triple-bar reversal pattern albeit with light participation. Nonetheless, the bar aligns with the general trend which is up.

In the meantime, Apr-11 bear bar—347k is our focus bar. The moment LTC prices rally past $90 with high volumes above 347k; conservative, risk-averse traders can load up with the first target at $110 and later $150. Presently, risk-off traders should load on dips with the same targets but with stops at $70.