As it happened: The World’s Biggest Bitcoin Party on a Cruise 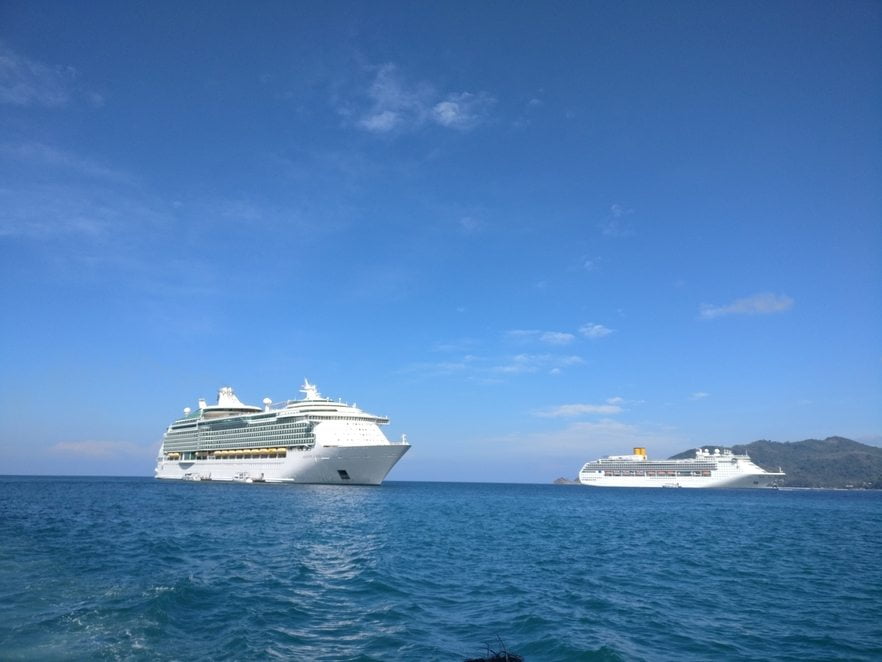 A man out of nowhere jokes, “Look at this Bitcoin Titanic.”

A few in the queue, who could make out the meaning of the pun, laughs uncontrollably while admiring a colossal cruise before them for its unmatched beauty with their iPhones out.

The check-in queue moves slowly as usual, but the conversation about the Bitcoin’s meteoric rise keep everybody occupied. The people are meeting for the very first time, but they have read about each other. Business cards are out and being exchanged for other business cards. The crypto-community, it seems, has finally come out of their digitized pseudonymous avatars to finally interact in the real world.

It is January 15, 2018, the day when blockchain investors, developers, enthusiasts, and media professionals are about to board Royal Caribbean’s Mariner of the Seas. The 1,020-foot-long ship will be a host to the CoinsBank Blockchain Cruise Asia conference for the next four days, during which it will travel from Singapore to Thailand via Malaysia.

The attendees are handed over the entire conference program, which mentions a long list of crypto-celebrities as speakers. They include Jose Gomez, a former assistant to the late Venezuelan President Hugo Chavez; Jorg Molt, one of the few early Bitcoin adopters who claim to hold billion dollars worth of digital currency assets; and Kaspar Korjus, the chief of Estonia’s famous e-residency program.

But the biggest takeaway is John McAfee, the celebrated cybersecurity expert and a cryptocurrency evangelist, who will be joining the rest of the Blockchain Cruise attendees in Thailand. During the conversations at the dinner table that night, people are enthusiastic about listening to McAfee’s views on emerging cryptocurrencies and their impact on businesses and on Bitcoin.

Day 2: The Day of Blockchain Governance and Penang

Savoy Theater, Deck 3: It is January 16, 2018, 0900 hours. Susan Poole, celebrated blockchain columnist and the honorable host to Blockchain Cruise Asia, starts with an enthralling opening keynote. The topic, in the meantime, remains to be blockchain and its imminent integration into government schemes.

Watch them speak in our exclusive two-part coverage:

The conference for the day concludes. It is time to enter Malaysia and have some tourist time.

The Mariner of the Seas is docked a little far from Phuket, Thailand. The Blockchain Cruise Asia attendees are required to gather for an event on Paradise Beach. Everybody looks excited about stepping out from the cruise for a while. Most of them are already talking about taking a swim into the sea on a sunny day; while many of them are just hoping to meet John McAfee in person.

It is the same day when Bitcoin price has dropped towards $10,000. Attendees, however, are least nervous about such fluctuations. They look sure about their positions. Some quite discussions take place but get overcome by the excitement of an event that is lying ahead.

The crowd reaches Paradise Beach. This event is no less than a beach party. The stage is set. Songs about Bitcoin are echoing through the place. Some attendees are already inside waters. Others are enjoying sips of iced juice in a beach-bar while discussing their future cryptocurrency positions after the latest BTC drop.

The beach begins to be less of an attraction when the clock hits 1315 hours. The shacks before the stage start getting occupied. John McAfee is visible behind the stage, perhaps rehearsing his speech. His name gets announced.

The momentum is kept alive by the following speakers. Ronnie Moas, founder, and director of research at Standpoint Research, Inc speaks passionately about Cryptocurrency Diversifications and Income Inequality. His initiative of raising funds for the poor gets lauded from everybody in the audience – and even from the backstage.

A beautiful sunset before the main stage indicates the end of the conference for the day. Everybody gathers near the pickup spot and transports back again to the Mariner of the Seas.

Day 4: A Full-Day Discussion on Token Sale and Blockchain

January 18th, 2018 is the busiest day on the Mariner of the Seas. It is going to be a whole-day event and journey back to Singapore. The conference is taking place in two different theaters (not far away from each other). In Savoy Theater on Deck 3, Jorg Molt is speaking about Bitcoin vs FinTech’s growth in the next 5 years. While in Conference Center on Deck 2, a whole new discussion about Token Sales and Investments are going on.

The day goes on with discussions and speeches taking place concurrently. It’s all up to the attendees that which one they want to pick. If one has to compare the two auditoriums, the Conference Center on Deck 2 is literally catching more eyeballs than the Blockchain section on Savoy Theater. The shift signifies ICOs as the trendiest thing in the cryptoverse.

In the meantime, let’s not forget to mention some speakers on their brilliant insights. Tameez Abramjee, the CEO of Global Crypto Exchange, lays out a nutshell opinion about cryptocurrencies in Africa. Tone Vays, Blockchain Consultant and Researcher, and Jack Tatar, co-author of Cryptoassets, in their respective speeches, deliver powerful insights on crypto investment.

NewsBTC’s very own contributor and a long-term HODLER Jayanand Sagar also participate in a panel discussion on Media’s role in cryptocurrency sector.

The event has concluded. As the cruise heads back to Singapore, the crypto-community is heading back to their party mood. Coinsbank has arranged a private lounge for them where they can interact further, and establish more business contacts before the journey ends. Some drink, some dance, while some just stay blockchain-zoned.

There is a lot to take away from this entire experience, something that cannot fit this article. It should be best enjoyed and relived in the next installment. Reports are that Coinsbank will soon organize another event. So to the 700 attendees, and to those who could not make it this time, there will be another announcement from Coinsbank soon.

In the end, I think to myself, ‘That was no Bitcoin Titanic. Titanic drowned.’