Overly, most coins are in range mode with the exception of LTC/USD and TRX/USD which are bearish. This is after unexpected losses below $50 and 2.3 cents on Oct 29 igniting sellers. But still, EOS/USD and XLM/USD are holding on with minor losses. All things constant, we shall retain a neutral approach waiting for moves below or above important levels before initiating trades. 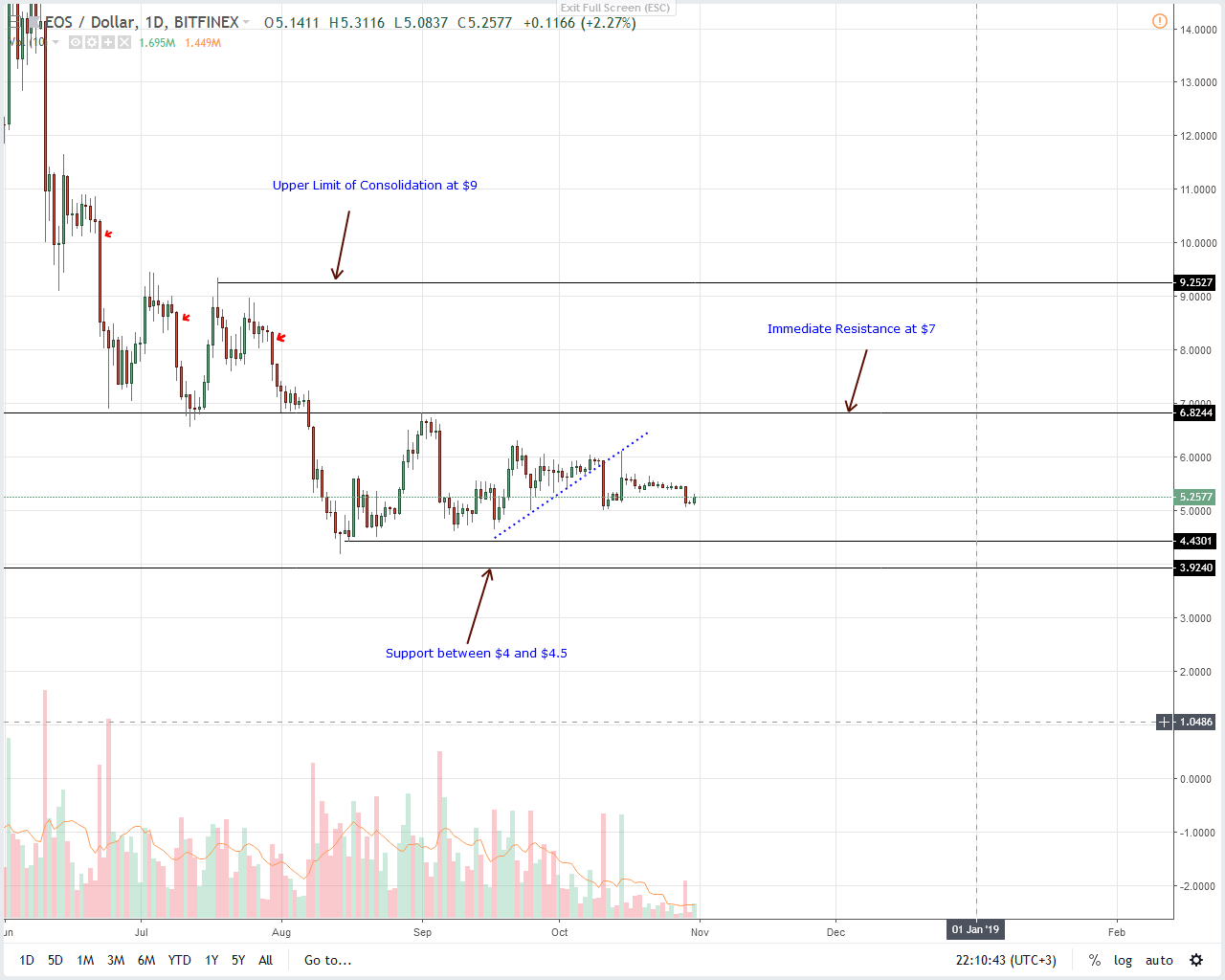 Countering Oct 29 losses, EOS/USD did print respectable volumes yesterday. However, this is not a call for bulls. This is so since prices are still oscillating within Oct 15 high lows. Additionally, none of our trade conditions are live hinting of a stable market. Technically this is bullish and point to underlying EOS demand which could be the perfect ingredient in an unstable market. Therefore, all things constant, previous EOS/USD trade plans are valid. Once there are rallies above $7, then EOS bulls would be free to buy on pull backs now that prices are down +80 percent from 2017 peaks. 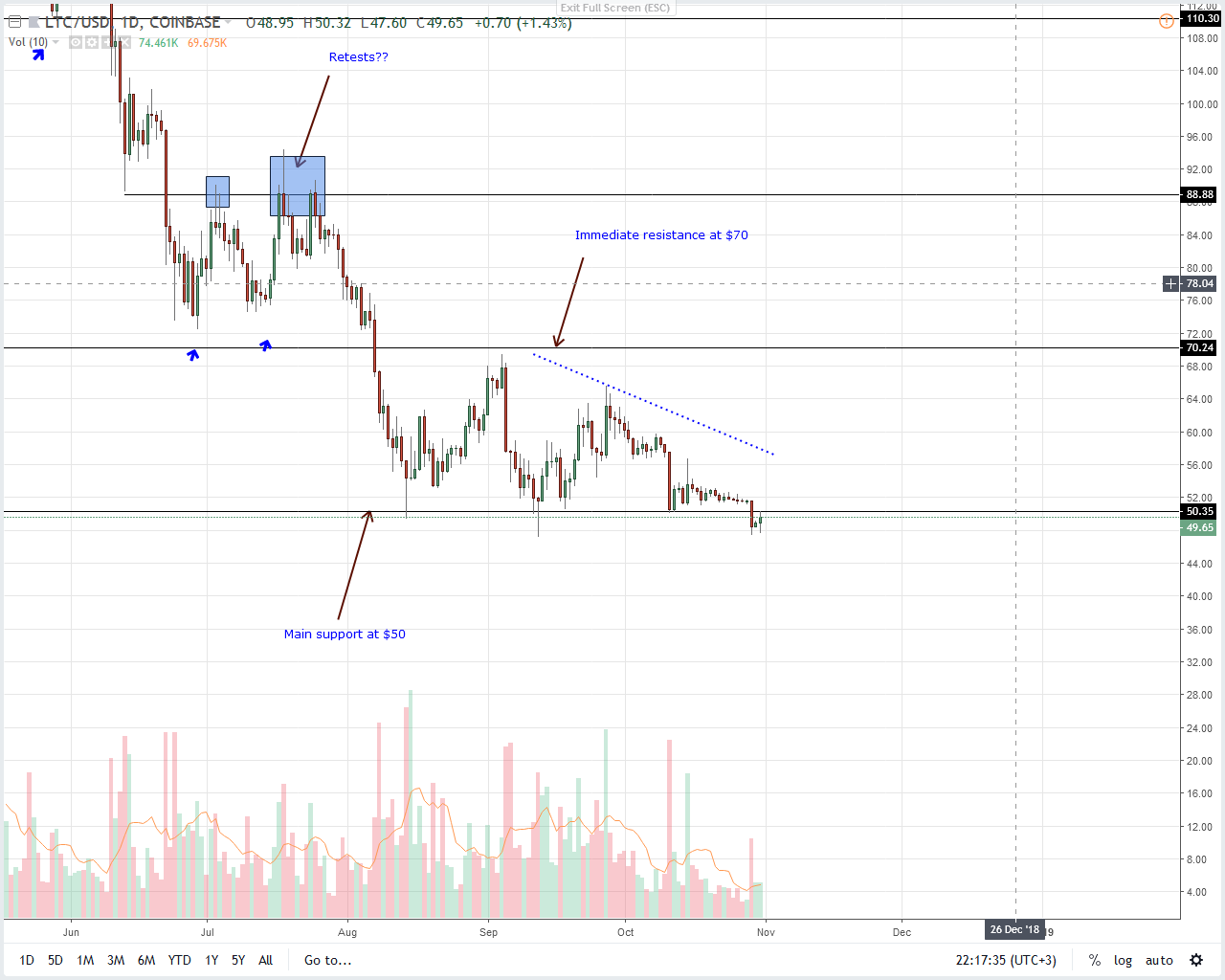 As long as LTC/USD pair is trading below $50, then Litecoin is bearish in line with our previous trade plans. It also means shorts of Oct 30 are valid and unless anything, stops at Oct 29 highs remain intact. As such, because of yesterday’s price support, it’s going to be a waiting game. Should our stops be hit then we shall revert back to neutral. That also depends on if there are spikes in trading volumes backing the reversing bar. Thereafter bulls would only be in charge once LTC/USD expands above October highs at around $60. As it is, Litecoin could as well slide, hitting our first bear targets at $30. 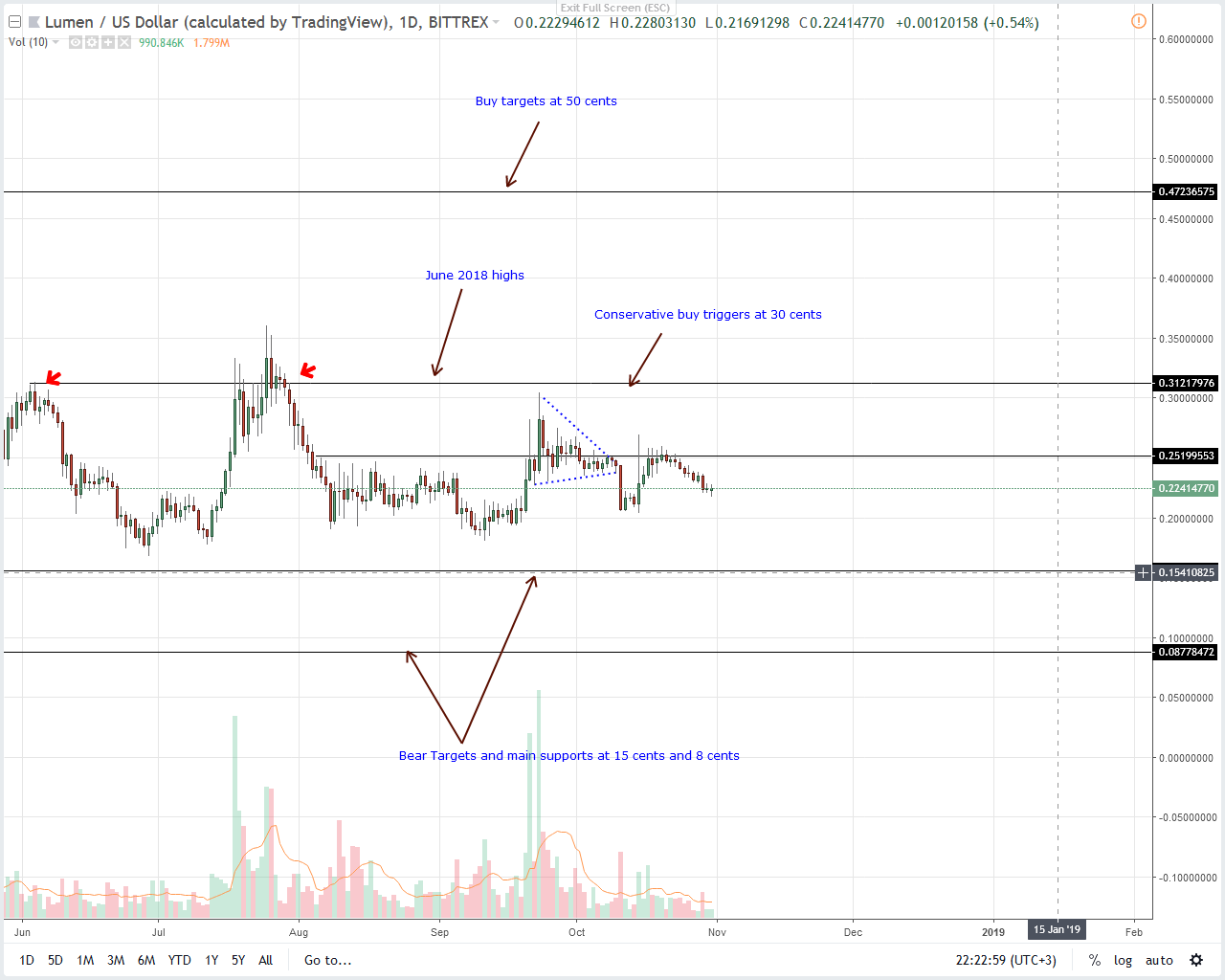 In a market that is already down +80 percent from 2017 peaks, stability and correction is near inevitable. That’s the case with the XLM/USD pair which despite shedding eight percent in the last week is stable in the last day buoying traders. However, yesterday’s higher highs should not be interpreted as a victory parade for buyers. First, bulls should inch higher and once there are convincing breaks above 25 cents at the back of strong volumes then it’s likely that XLM/USD shall surge beyond 30 cents. Because of the last two events, today we shall turn back to neutral. Therefore, as we trade in line with previous trade plans, dips below 20 cents–15 cents support is negative for this coin. 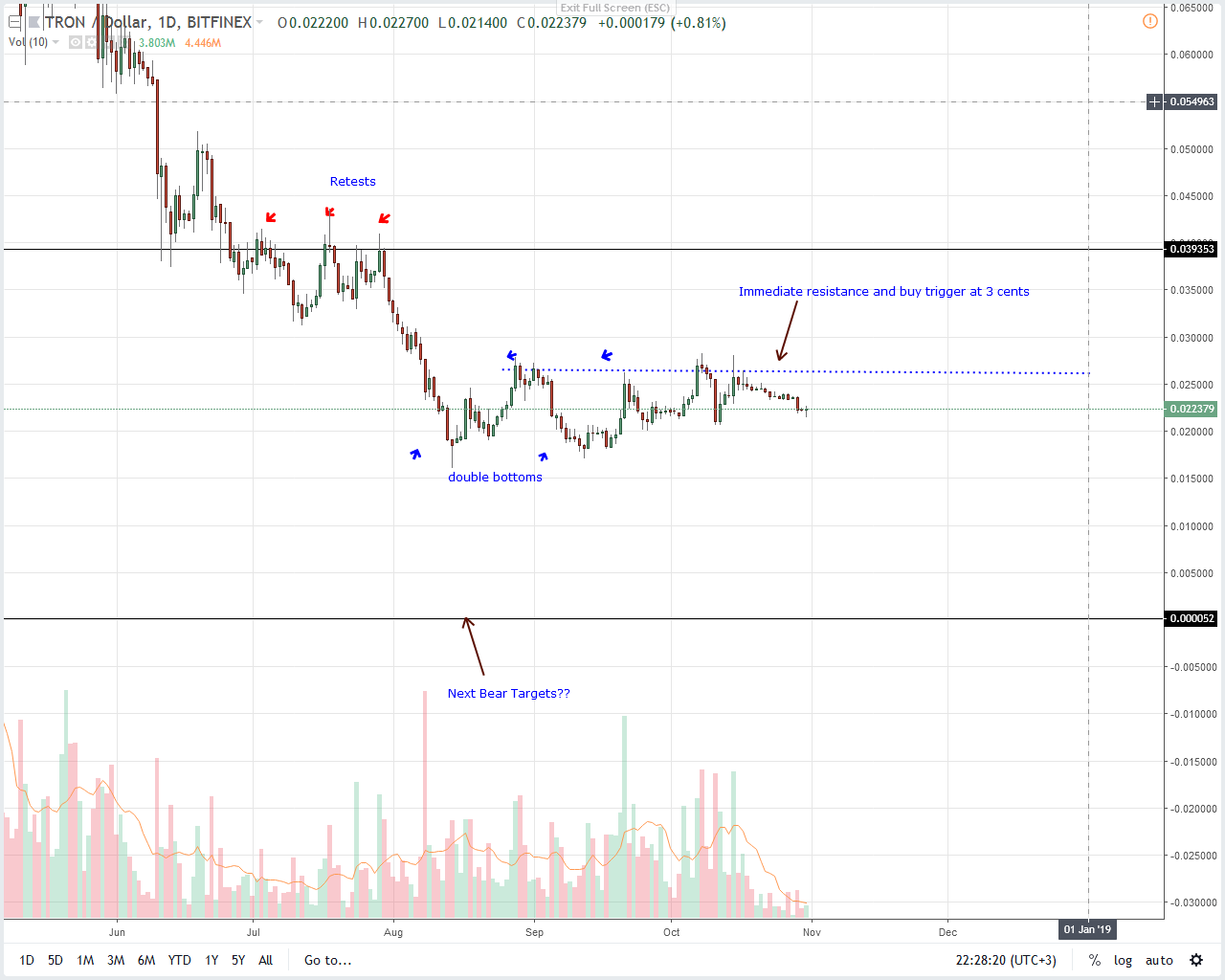 Despite higher highs, our TRX/USD sells triggered by Oct 29 sell off is valid. Then again, the prevailing trend is bearish and yesterday’s pull back was expected following Oct 29 break below reversing Oct 15 gains. Though volumes are thin, we shall interpret every pull back a selling opportunity with valid stops at Oct 29 highs. As such, unless there are surges reversing Oct 29 loses, first targets remain at 2 cents and later August lows at 1.5 cents. On the other hand, bull trend resumption and gains above Sep highs could trigger a wave of bulls aiming at 4 cents.

Monster Cleaning: “We are now accepting IOTA payments.” [‘IOTA’s goal was to make a currency that can work with IoT devices & make microtra…

The IOTA adoption wave is on and UK’s Monster Cleaning now accepts IOTA. 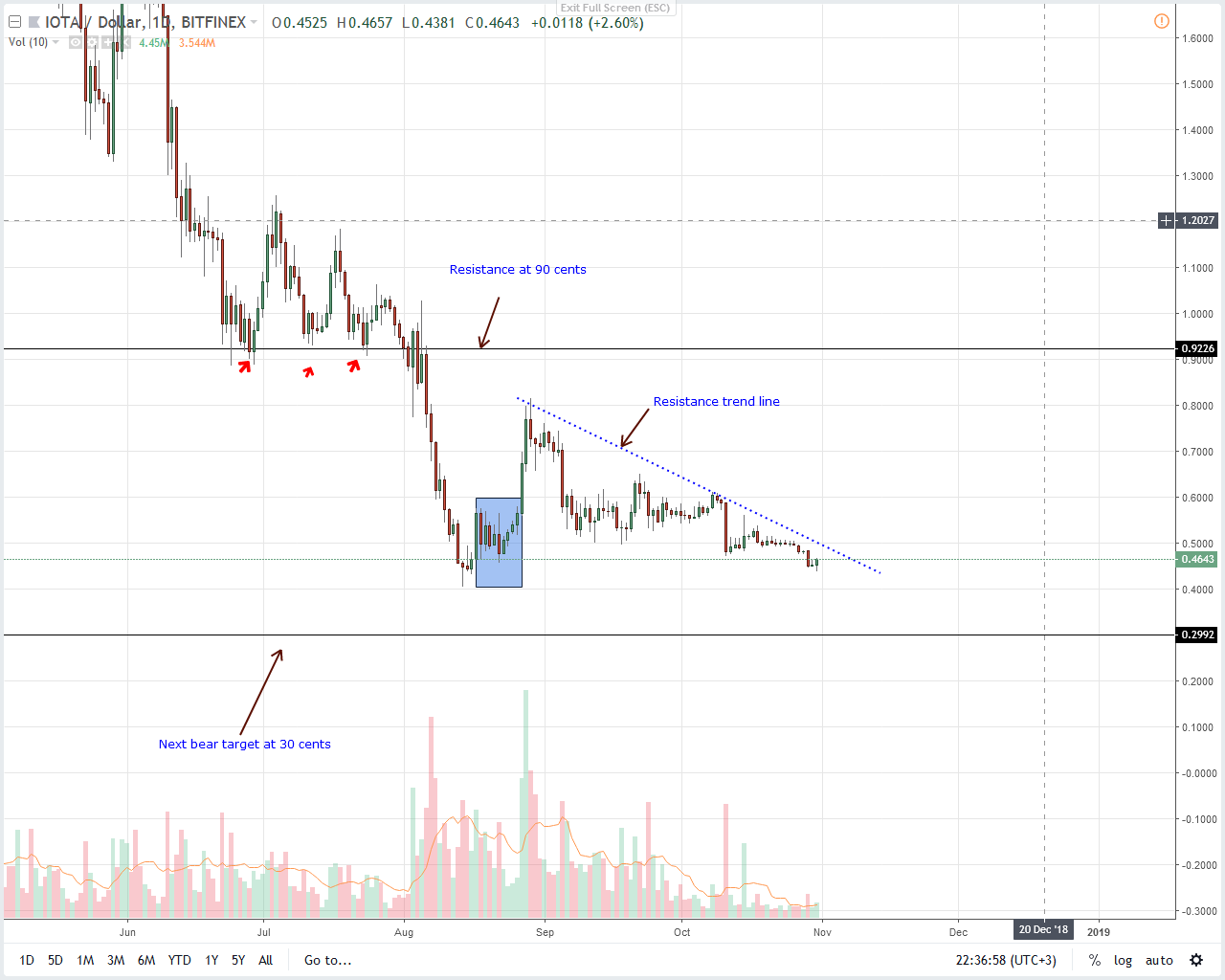 On the price chart, IOTA is literally struggling against strong sellers. The two month resistance trend line connecting recent higher highs is clearly a liquidation line damping bull momentum. Nevertheless, after deep shavings on 2018, we are still optimistic of respectable IOTA reversals. In line with all our IOT/USD trade plans, buyers would be in charge once prices edge past 55 cents. However, high volumes break outs above the resistance trend line could ignite the first wave of bulls with immediate targets at 90 cents.