IOTA Bulls May Dominate And Drive Prices To Q2 2019 Highs

From Azimuth to Coordicide and the recent rollout of Trinity, IOTA is readying for a machine economy. As a leading IoT platform, fundamentals are bullish. Therefore, despite weakness, odds of price recovering are high.

In an automated data-driven future, there is no room for error. As a result,  IOTA is prepared and laying the framework, the necessary foundation for a secure network. Critics were slamming IOTA for their blockless, Proof-of-Work dependent consensus algorithm claiming the Coordinator was centralized.

Luckily for IOTA fans, developers are working overtime for a solution that will not only secure the network from one-third attacks, as that is what a determined hacker needs, but to make the platform as scalable and decentralized as possible. Coordicide is the solution. The option entails the complete removal of the Coordinator without compromising the security and efficiency of the network.

However, it doesn’t stop there. There are rafts of developments in progress. Top of the list is Azimuth. In a new consensus algorithm that is reliant on Proof-of-Work, Azimuth is all about efficiency. Azimuth, it appears, is a dedication. A show that developers are working their hands to the bone.

Basically, it is a spam protection mechanism that is so efficient that it doesn’t need the computational power like in other proof-of-work systems. Because of autopeering, nodes will accept transactions from any neighboring nodes meaning small IoT devices can quickly join the IOTA ecosystem without wasting their computational resources.

As a result, not only will the IOTA ecosystem be more secure and scalable, but it is the essential cog required for a prosperous, revolutionizing machine-to-machine economy. 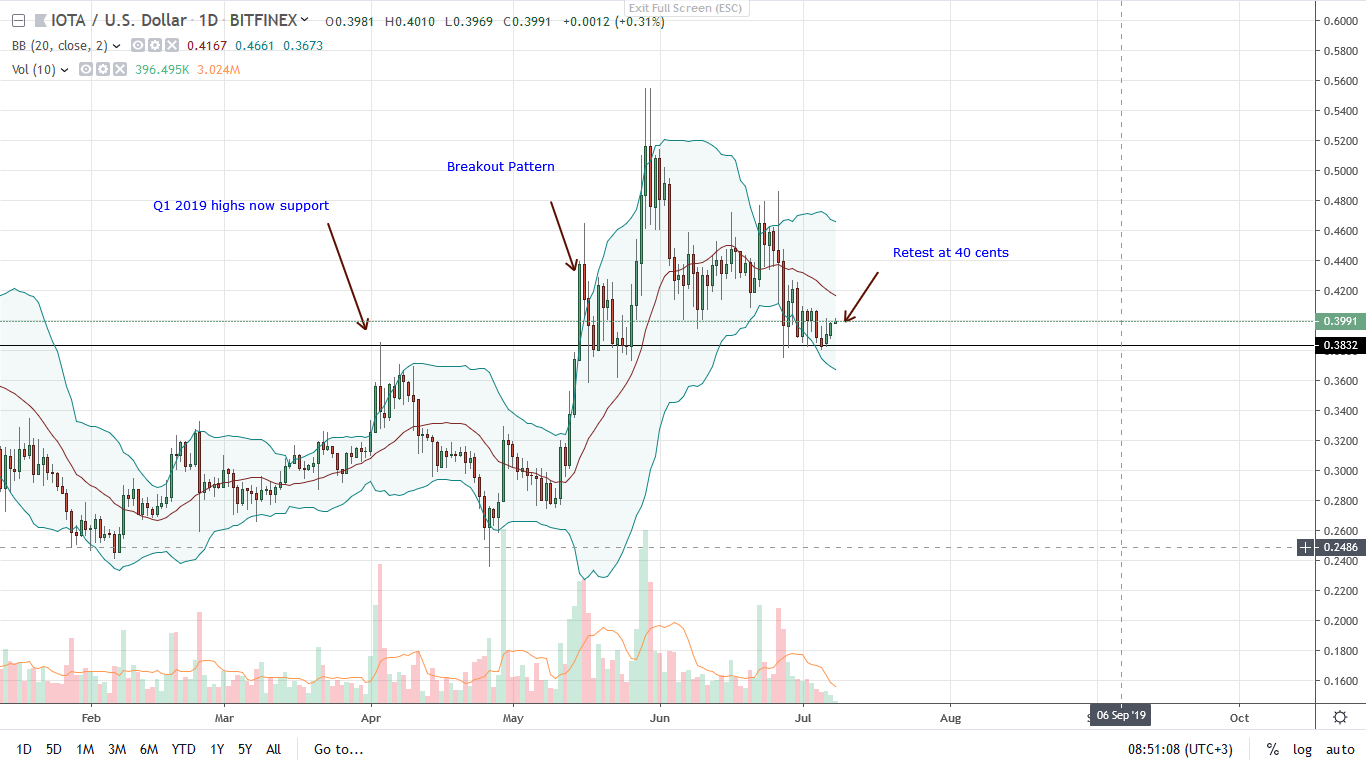 At the present time, IOTA is down the market cap rankings. Dropping to 19th, IOTA is wallowing and below NEO. Even so, it is stable and fundamental factors alone mean the coin is bullish. If anything, and in line with previous IOT/USD trade plans, buyers are in control.

Note that there is support from 40 cents. Trading within a bullish breakout pattern thanks to upswings of mid-May 2019, buyers are in the driving seat.

Concluding retests, IOTA bulls may end up printing higher this week. Accordingly, every low is an entry opportunity for aggressive traders aiming at 55 cents or May high. Contrarily, If there is liquidation below 40 cents complete with high trade volumes, prices may tumble to May low of around 30 cents.

Ideally, the reversal of June 27 losses at the back of high participation exceeding 17 million of June 26 is bullish. As mentioned, that will open the flood doors for 55 cents or better in coming weeks in a trend continuation phase, the third phase of a classic breakout pattern.

Tags: AzimuthIOTATrinity
Tweet123Share196ShareSend
Win up to $1,000,000 in One Spin at CryptoSlots