Decentralization is the central theme within blockchain circles. And IOTA is not deviating. With Coordicide, the network will be more decentralized and “inherently modular.” As a result, IOTA prices may inch higher in response.

For an efficient future, there must be investment supporting the development of the Internet of Things (IoT). Regardless of one’s opinion, IoT is vital for future efficiency. Statistics reveals that the IoT as an industry was worth $130 billion by close of the financial year 2018.

Good news is, the figure could more than double, in the next four years, to a whopping $318 billion with a compound annual growth rate (CAGR) of 20 percent. Now, to say IOTA leads in innovation and development in this space is an understatement.

Following the precedent set by Cardano, IOTA is hard at research for the general betterment of the IoT and indeed the blockchain space. Already, there are plans to eliminate the central coordinator, in an upgrade dubbed the Coordicide, the Iota landscape will be more decentralized than before.

Furthermore, Coordicide shall scale the network. In their latest technical update, the IOTA Foundation says:

“Removing the Coordinator from the IOTA network will realize a long sought-after goal in the field of DLT: scalability without centralization. The solution itself is inherently modular, meaning that users will have the ultimate freedom to tailor the system to their individual needs.” 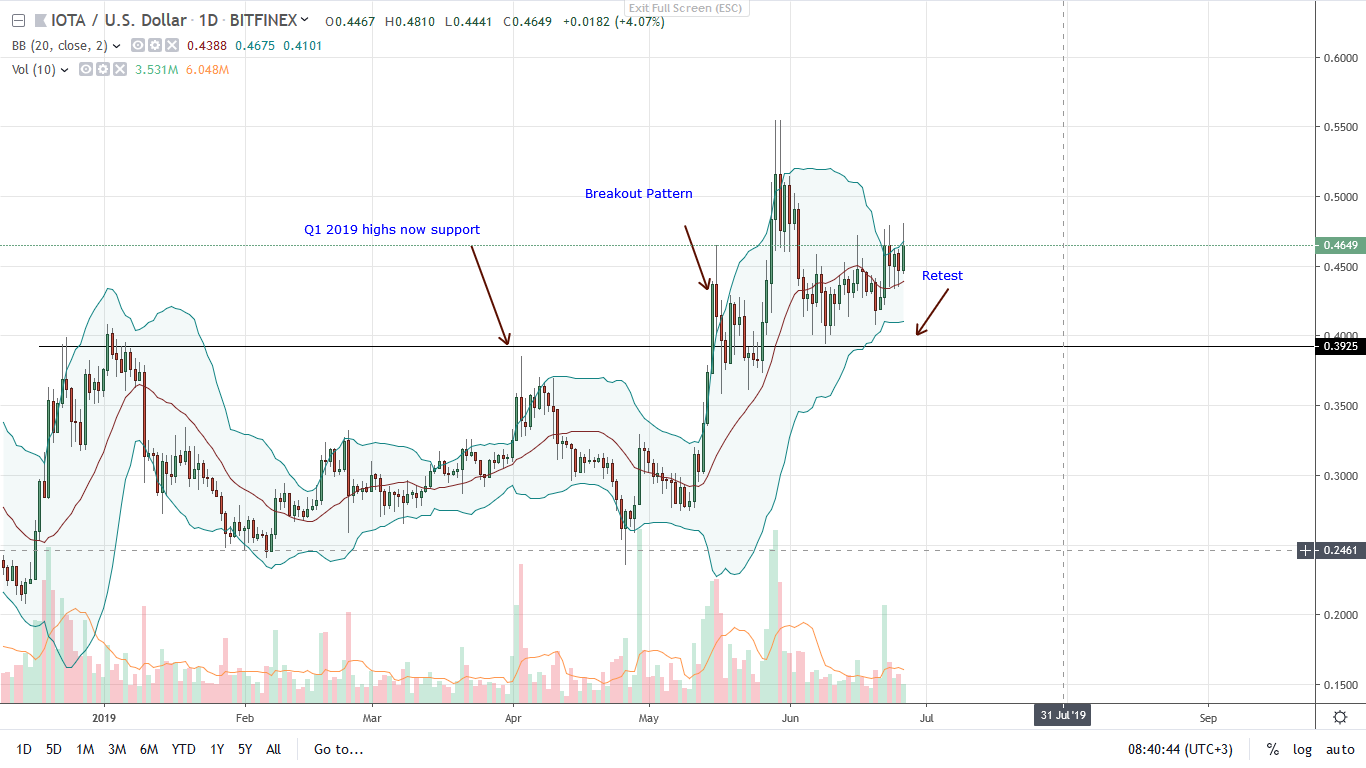 Even so, that is not stopping other project’s coins from usurping IOTA. Down to 18th in the liquidity and market cap leader board, the currency is trading at 46 cents. Because of that, it is 11.2 percent higher from last week’s close, and bulls are aiming for more.

Like most assets, IOTA is trading within a bullish breakout pattern against the USD. After the retest following the double bar bear reversal pattern of late May 2019, the retest of 40 cents, the break out level is complete.

Marking the entry of buyers is June 22bull candlestick that is extensive with decent trading volumes. In light of the above, traders can enter at spot rates with targets at 55 cents and later 90 cents. Fitting stops will be at 40 cents or the low of the breakout bar of May 15

From an effort versus result point of view, buyers have the upper hand because of June 22candlestick. Buoyed by a spike in trading volumes of 19 million against 6 million, it is likely that prices will edge higher. In that case, traders should tune entries in smaller time frames with the expectation of participation expansion as prices inch higher.