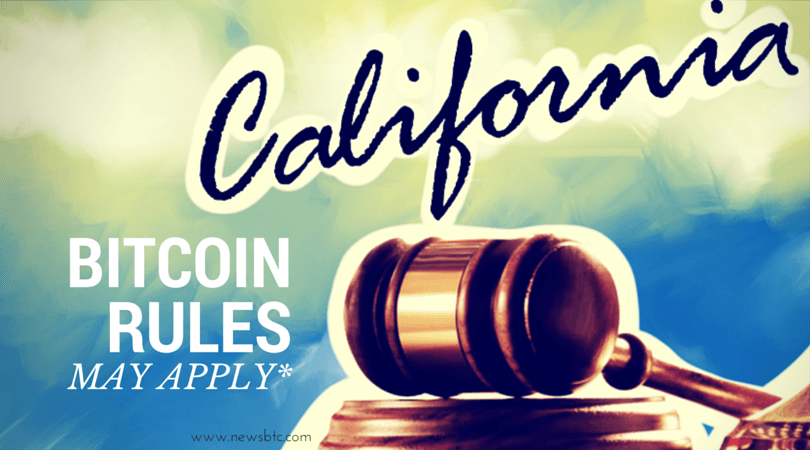 Following the BitLicense framework in New York, another US state is considering implementing legislation for bitcoin legislation. According to the California Department of Business Oversight (DBO), it has decided not to exercise its authority to regulate bitcoin and digital currencies. Instead, the agency will leave this up to state legislature.

However, DBO spokesperson Tom Dresslar said that they haven’t finalized their decision. “We’re still in the process of how or if at all to regulate virtual currency business under our current statutory scheme,” he explained.

Prior to this, the DBO already planned on setting a meeting to discuss potential bitcoin regulation in light of recent developments back in December. The meeting has since been delayed, lending more uncertainty on whether the agency will manage bitcoin regulation itself or not.

At that time, Dresslar mentioned that the state was seeking to determine whether regulating bitcoin and digital currencies was in the best interest of consumers. Dresslar also declined to comment on when the proposed meeting was set to take place.

Bear in mind that California is one of the country’s more populous states and is home to around 40% of all bitcoin professionals as of 2014. Large bitcoin companies such as Coinbase, Ripple Labs, and ChangeTip are based in this state.

The move towards addressing bitcoin regulation was spurred by the approval of Assembly Bill 129, which granted bitcoin and a host of other alternative forms of value the status of “legal money” under California law.

As noted by Roger Dickinson, the California assembly member who introduced the bill, Assembly Bill 129 does not regulate bitcoin in California, a matter that will be left up to other authorities. After its approval, the DBO issued a warning addressed to consumers about the risks of transacting using digital currencies.