At third with a market cap of $12,861 at the time of press, Ripple (XRP)—like the rest is under pressure. However, this has been compounded by regulatory uncertainty which is likely to be clarified next year. If the SEC has reason to classify XRP as a utility with no central control, prices will surge towards Sep 2018 highs at 80 cents.

Ripple Inc promotes three of their central solutions to financial institutions and payment processors. Of the three, xCurrent is widely used. However, if XRP as an asset is to thrive, then banks must use the xRapid network. While offering the same end to end encryption, the solution uses XRP as a means of exchange.

To facilitate transactions, Ripple Inc is working with different exchanges across corridors of their interest. There is Coins.ph and Bittrex between the US and the Philippines. At the same time, there is Bittrex and Bitso between the US and Mexico corridor of which Mercury FX is dominating.

Even so, the lack of confirmation from regulators is forcing would be clients to postpone their plans allowing Stellar and IBM to narrow the gap. All the same, it is a good thing that IBM–with their history with banks, is demonstrating that despite blockchain being new; it can be efficient and cost saving. 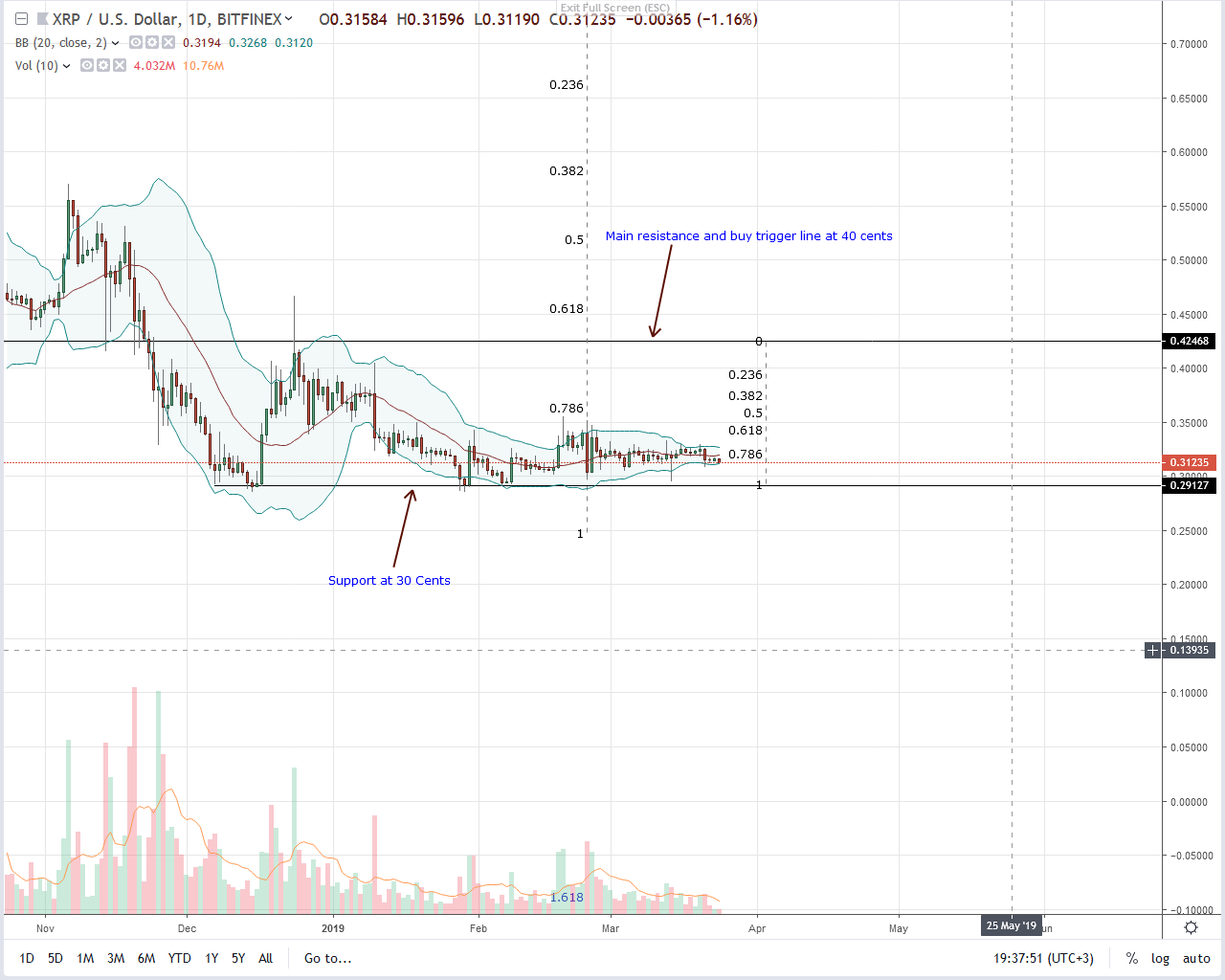 A month after dropping from 34 cents, Ripple (XRP) sellers are clearly in charge. It is down three percent from last week’s close and pretty stable from yesterday. Regardless, we are net bullish expecting higher highs in the next few days.

However, all that is dependent on the reaction at 30 cents and how fast losses of Mar 21 are reversed—or confirmed. If the latter is the case and prices crumble below 30 cents, then bears of Feb 24 would cause a meltdown towards 25 cents canceling our stance. On the other hand, reversal effectively confirms gains of Jan 30.

Relative to Feb 24 bear bar—61 million versus 30 million averages, it’s evident that participation is shrinking. Today’s averages stand at 14 million which is less than half that of Feb 24.

All the same and as per our previous emphasis, buyers would only be in charge if there is a spike of volumes above 17 million of Mar 21. That will jolt bulls back in track solidifying our stand.

Tags: ETHRipplexRapidxrp
Tweet123Share234ShareSend
Win up to $1,000,000 in One Spin at CryptoSlots