Jesse Lund is optimistic of future Bitcoin prices valuing the coin at $1 million. Cementing his optimism is increasing adoption which he says draws value and hence the huge valuation. Before $1 million, Bitcoin (BTC) must first breach $4,500 with decent volumes.

The creation of Bitcoin was monumental. It will continue to be as long as the demand for better fiat alternatives exists. Going by latest projection, it is likely that BTC prices will find use, proving its utility as peer-to-peer electronic cash.

Although the contention is on whether the coin will find eventual use as a store of value, that is, a settlement layer, or a medium of exchange, it is clear that Bitcoin adoption curve is on the right track. Regulators are thawing, and as the Lightning Network gain traction, it is the borderless BTC that will draw demand.

As a result of this upbeat view, it is no wonder that the SVP of IBM, Jesse Lund is very bullish on Bitcoin. It’s all about utility and the more valuable the coin, the more value it draws. In an interview at the Think Conference, he said the currency would be at $1 million in a decade:

“I have a long-term outlook. It goes back to that discussion about the utility of the network at a higher price. I see Bitcoin at a million dollars someday. I like that number because if Bitcoin’s at a million dollars, then the Satoshi is on value parity with the US penny. And that means there’s over $20 trillion of liquidity in this network. Think about $20 trillion in liquidity and how that changes things like corporate payments.” 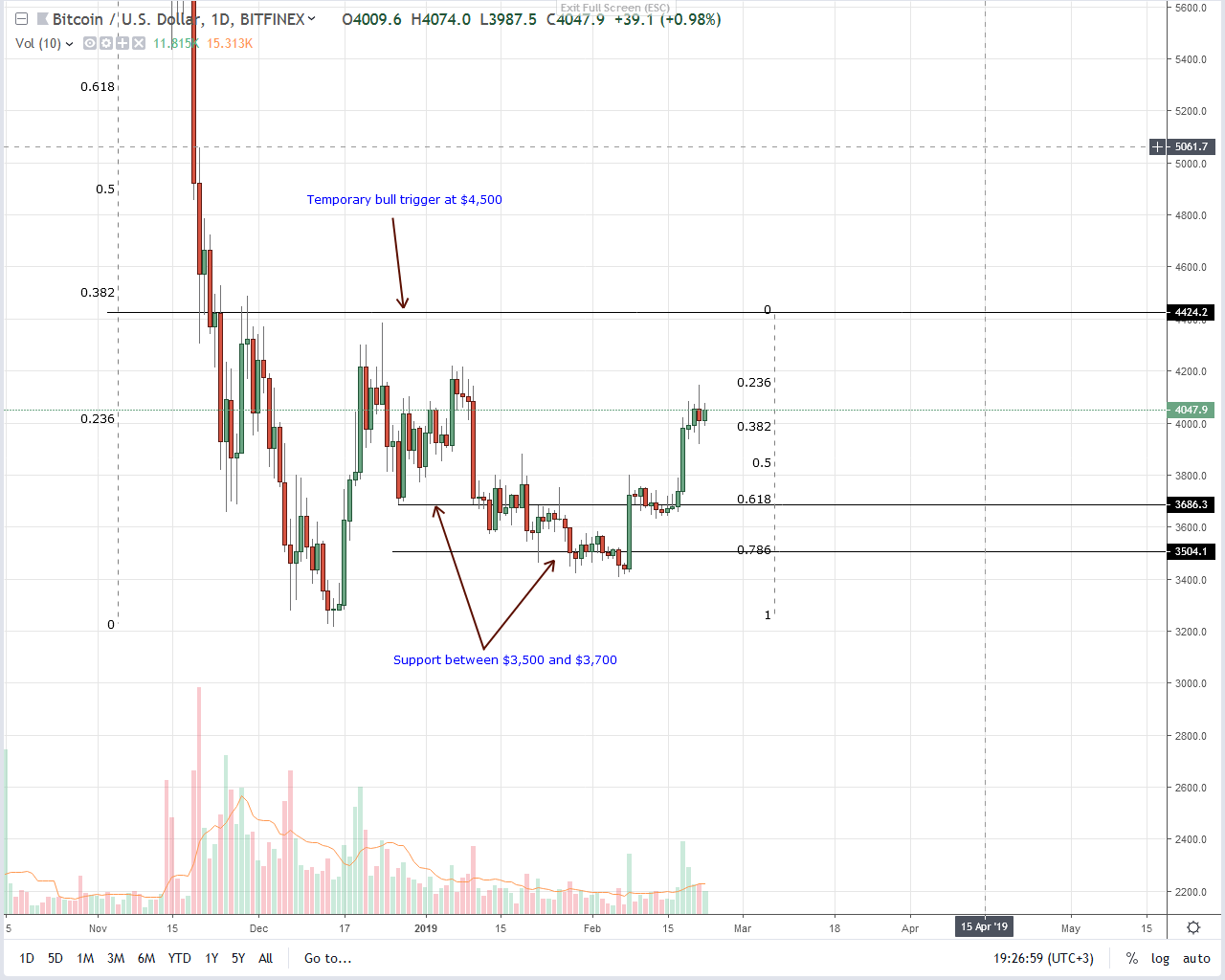 In the short term, the trend is set, and Bitcoin (BTC) buyers are in control. Despite yesterday’s liquidation attempts, BTC is edging higher thanks to demand surge in the Asian session. As a result, price action has been realigned and trending in line with our last BTC/USD trade plan.

Since prices are up 10.1 percent from last week’s close, buyers have the upper hand. First targets will be at $4,500 but it is when prices rally above $4,500 is when risk-averse, conservative traders can buy on dips with first target at $5,800—the first resistance level.

Encouragingly, market participation is on the rise according to data from BitFinex. Average daily volumes are up from 10k registered on Feb 6 to 15k of Feb 21. We expect this trend to continue as BTC prices expand towards $4,500. Ideally, any break above $4,500 should be at the back of high volumes exceeding Feb 18’s 37k.