Litecoin Unfazed by Trump’s Anti-Bitcoin Tweet: Does LTC Have Legs?

After a brutal crash earlier this week, Litecoin has stabilized, finding itself just over $100 at $103 despite an anti-crypto and -Bitcoin tweet from Donald Trump.

Its price action has mostly been a byproduct of Bitcoin’s movements, which have been rather bearish after Tuesday’s blow-off top.

Litecoin is about to experience its next halving event. For those not versed in “crypto-speak”, this means that the number of LTC issued each 2.5 minutes will be slashed in half, hence “halving”. Such events take place every four years, meaning that Litecoin has a slowly-decreasing inflation rate — music to the ears of “hard money” advocates.

According to a recent interview with Charlie Lee, a Google engineer-turned-early Bitcoin pioneer and Litecoin creator, the halving may be a short-term “shock” to the blockchain.

You see, if LTC prices don’t appreciate sufficiently prior to the event, Litecoin miners may be incentivized to shut off their mining machines as the block reward reduction hits, as that effectively cuts their profits in half.

If too many mining farms enlist this strategy, the Litecoin blockchain will slow, leading to a delay in transaction processing because of a lack of network security. However, this issue will be quickly reverted once the blockchain automatically adjusts the difficulty of blocks. As Lee expounds:

“The halvening is always kind of a shock to the system. When the mining rewards get cut in half, some miners will not be profitable, and they will shut off their machine.

If a big percentage does that, then blocks will slow down for some time. For Litecoin it’s three and a half days before the next change, so possibly like seven days of slower blocks, and then after that, the difficulty will readjust, and everything will be fine.”

This is the worst case scenario, though. As many analysts expect, LTC should appreciate by a large amount ahead of the event. In fact, as NewsBTC’s Martin Young pointed out earlier, in the month coming up to the previous Litecoin halving, the asset gained 400%. The same may be unlikely to occur this time around, but some are eagerly hoping for such an auspicious event. 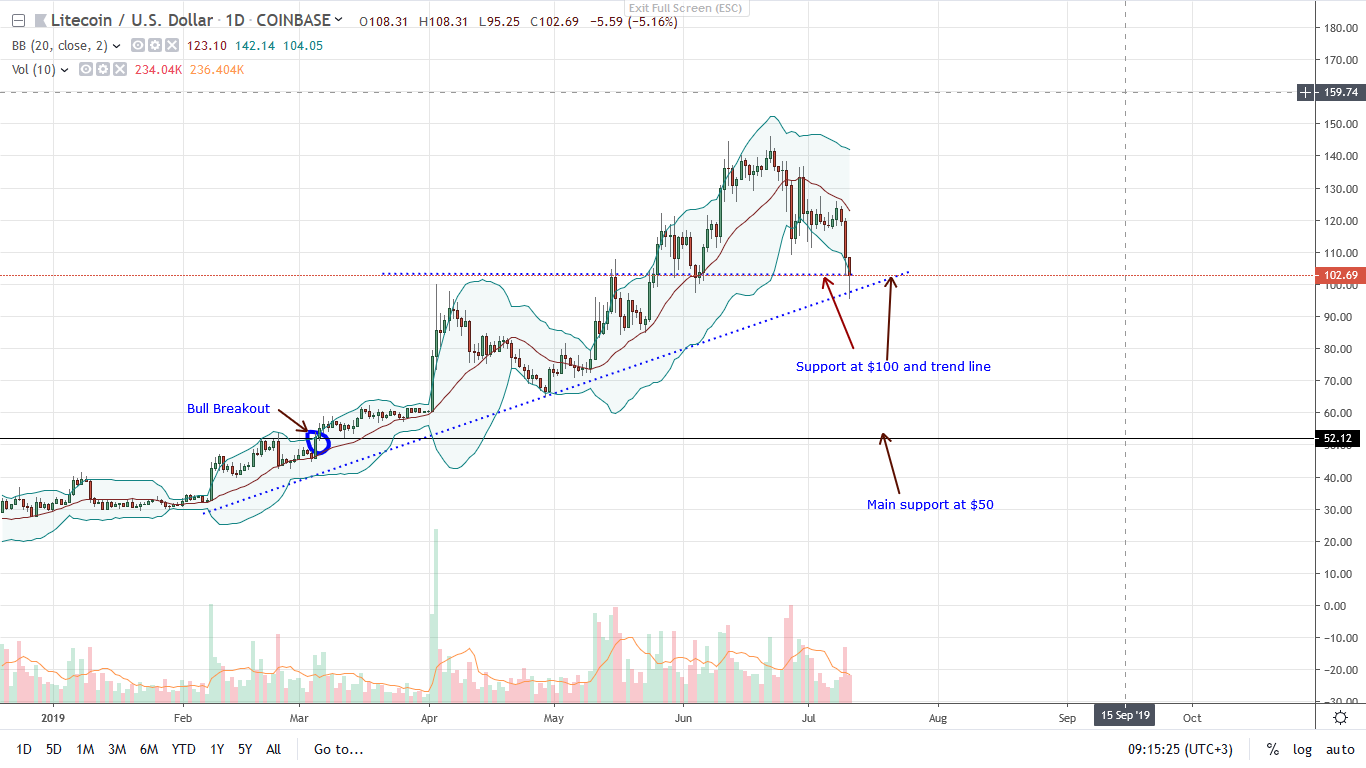 At fourth, Litecoin is well-capitalized thanks to exemplary performance in the first half of the year. The rally from lows of $20 to over $120, Litecoin bulls were on a roll. However, like all near perpendicular expansions, the correction is often brutal.

Evident in LTC price action, the coin is down 14.5 percent in 24 hours and likely to lose more in coming days. From the chart, the drop below $100 is leading. Since LTC is within a bullish breakout pattern against the USD and currently retesting the main support trend line, any breach and close below $90 could trigger panic sells.

In a typical correction, odds are LTC will drop to $50 before recovering.

Therefore, from above June 27 candlestick is leading. As an extensive bear bar differentiating itself from others with high trading volumes of 824k, any close below the support trend line must be with equally high participation. Should LTC drop below $90 with a spike in participation confirming losses of June 27, prices may drop to $50 in a typical retest.

Tags: charlie leehalvingLitecoin
TweetShare
BitStarz Player Lands $2,459,124 Record Win! Could you be next big winner? Win up to $1,000,000 in One Spin at CryptoSlots