Litecoin (LTC) May Break Or Soar In A Month’s Time

Perhaps the highlight of Q3 2019 will be the Litecoin halving. In a more involving and mature market, the reaction after the event could either disappoint or elate traders. An exponential rise will spur FOMO. However, if LTC dip or range hinting of a “priced-in” situation, traders would be deflated. For now, LTC is stable above $100.

The clock is ticking, and it’s less than a month to Litecoin halving. Hard-coded in Litecoin’s source code, rewards will be slashed. If demand remains the same, then market forces will naturally re-price LTC higher. In that case, prices could surge to new levels, immensely increasing the Return on Investment (ROI) of LTC holders.

Even without this halving event, Litecoin performance is thus far exemplary if not leading. Preceding Bitcoin’s revival, Litecoin bulls were rampant following a string of good news around plans of Mimble Wimble incorporation. Such a hard fork automatically scales the network while concurrently improving the privacy of LTC transactions.

For now, Mimble Wimble talk has faded. Instead, speculators are realigning to reap dividends assuming next month’s halving syncs with past events.

In other news, the Dementia Society of America (DSA) is the latest to accept a range of crypto assets, including Bitcoin and Litecoin. Discerningly, the idea is to avoid paying taxes since donations in cryptos like LTC or BTC are not deductible.  Under the initiative of “Click-to-bricks,” donors will swap the amount of crypto donations to bricks for use in the construction of their headquarters.

“The Giving Block to expand our crypto capabilities and engage the community, thereby expanding our reach. We will now accept Bitcoin, Ethereum, Litecoin, Bitcoin Cash, and USD Coin for general fund donations, legacy donations, and those donations made in memory or honor of a loved one.” 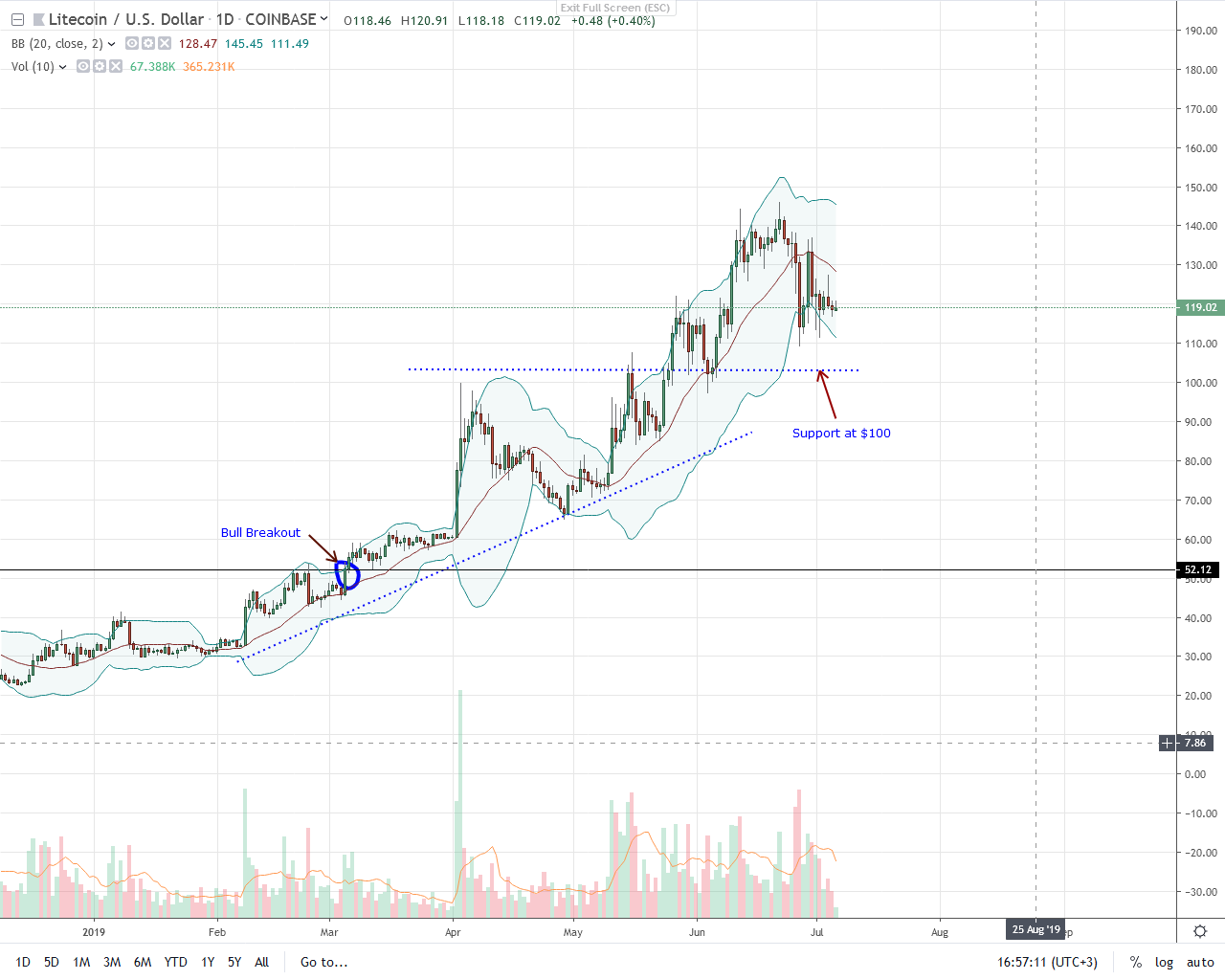 Posting superior gains, LTC is one of the top performers during the first half of the year. However, such rapid expansions did overstretch the asset. From candlestick arrangement, LTC is poised to correct back to the psychological $100 level in a retest.

Such a move is fitting as it adjusts the overvaluation of June 12 while simultaneously confirming losses of June 27.

By properly re-evaluating LTC prices and driving prices to equilibrium, aggressive traders can tune their entries in smaller time frames while aiming at $120 and $150. On the other hand, steep losses below $100 could see LTC prices fall to $80 and later $65.

Because of the above, June 27 anchors this trade plan. Note that prices are still oscillating within its high low. Above all, it is wide-ranging with high participation of 824k. Therefore, any slide below $100 or rally past $120 ought to be with high trading volumes exceeding 824k.