Despite FUD around cryptocurrencies, Litecoin bulls are active. Rejecting lower prices, LTC could float higher to $100 or better in coming days. Currently, bears will likely press lower since prices are down 17.4 percent week-to-date.

Undoubtedly, for what they seek to achieve, cryptocurrencies are the building blocks of a borderless future. As Bitcoin’s founder Satoshi Nakamoto laid down the seed that is now blossoming, attracting comments from Donald Trump and high-ranking policymakers, cryptocurrencies now finds itself at a crossroad.

Although bans tend to reinvigorate participation, tempering digital assets and making the network robust as seen in Q4 2017 following China’s ban, there is a risk of a clampdown as regulators force market players to comply with relevant rules.

Even so, not everyone is in sync with Steven Mnuchin or Donald Trump’s view that cryptocurrencies are tools for criminals. Ron Paul, a former Presidential candidate, is fond of cryptocurrencies.

Talking to CNBC, he said:

“I’m for the least amount of regulation. I don’t know what’s going to happen to cryptocurrencies. I think it’s a great idea. And I only have one rule: no fraud […] I think that the government has a role. And somebody has a case that there is fraud, I think it should be investigated […]  What I want to do is legalize the freedom of choice, absent blatant fraud.” 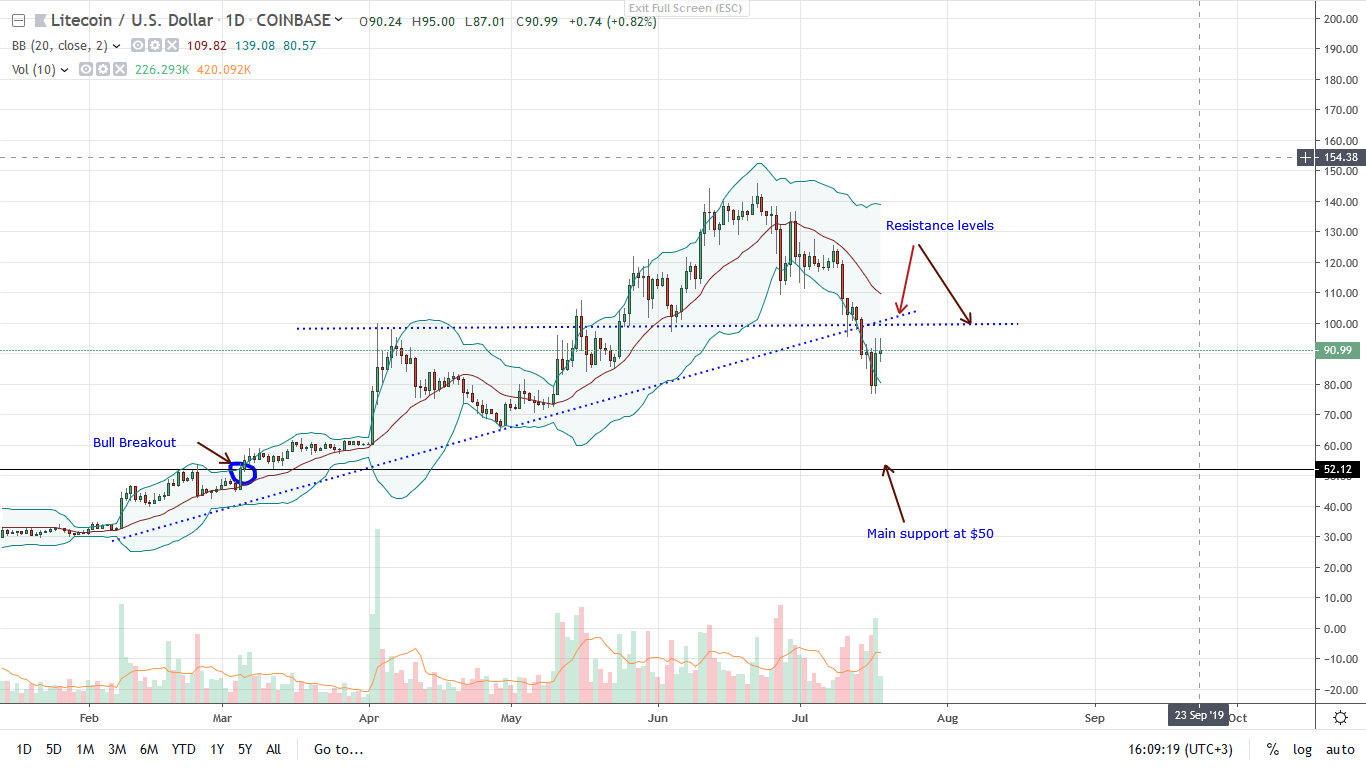 Presently, there is a slight recovery of asset prices across the board. However, this is common after a period of steep price decline. Trading below the $100 round number and the six-month support trend line forming a strong resistance confluence, sellers are in control. Regardless, there is a tinge of optimism.

Following a double bar bull reversal pattern from $75, LTC bulls may print higher. In that case, the first target will be $100. From there, sellers can fine-tune their entry in smaller time frames in readiness for $50 in a possible retest.

On the flip side, if there is a high-trade volume close above $100 ahead of August 5 halving, LTC could float higher towards $120 and $180 in a trend continuation phase.

Anchoring this trade plan is June 27 bear candlestick with high trading volumes of 824k. For confirmation of bulls or bears, subject to the direction of the breakout, the leading candlestick must be with high participation exceeding 824k. That will spur demand or liquidation with targets at $180 or $50 respectively.