Privacy is the future, and Monero is well-positioned. Despite their reliance on developers, Monero as a network is resilient, rebuffing miner centralization attempts. Thus far, like most coins, XMR is vulnerable. Even so, it is trading within a bullish breakout pattern against the USD.

The future is, indeed, private. Affirming this is a conscious campaign by citizens against behemoths keen on collecting and processing personal data for their benefit. Social media giant Facebook is one such firm. Notwithstanding their $5 billion settlement with regulators, they are looking to launch a stablecoin backed by several fiat currencies.

Although it is novel in theory, there are concerns. One of them is that Facebook will not be trusted with financial data given its track record. Whether or not Facebook’s Libra will weather the storm, Monero, the most visible privacy coin stands a chance. Already, it has support from Nick Szabo, the creator of smart contracts.

It’s a lucrative share that will cement Monero developers’ ambitions of creating a perfect cryptocurrency that is cheap, secure, and above all, without vulnerabilities because of complete decentralization.

Even so, there is always a trade-off. In the quest for complete decentralization and riding of ASIC miners, the network is vulnerable. Not only is it less secure in terms of computing power, but there is a risk of placing Monero’s code to developers relied on their frequent upgrades. 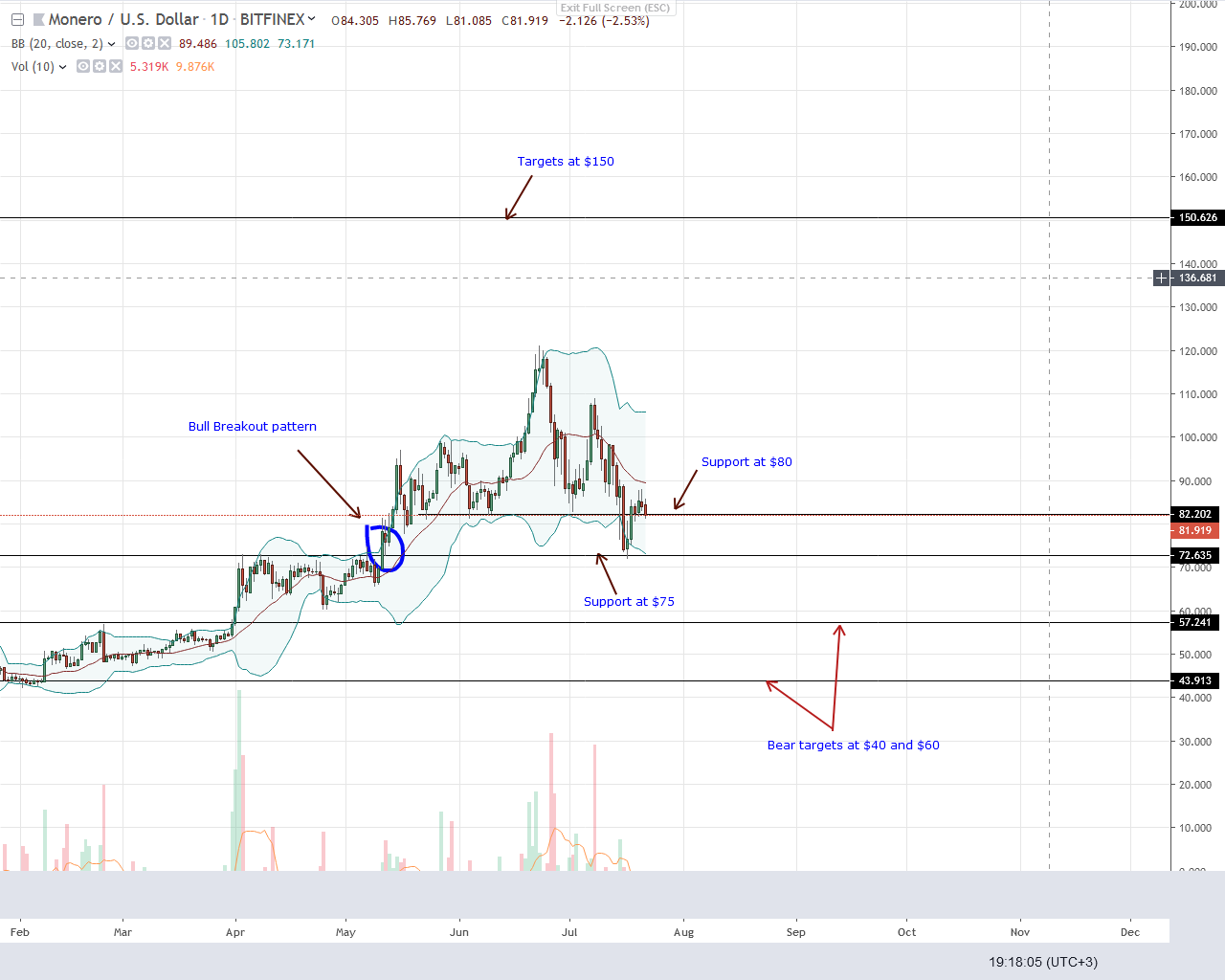 Presently, XMR is steady but under pressure. Similar to BTC and other liquid coins, there is a chance that bears will flow back. That’s regardless of XMR is trading within a bullish breakout pattern against the USD.

Unless otherwise there is a surge past the middle Bollinger Band (BB), the flexible resistance line and $100, the round number, XMR is likely to edge lower. From the chart, it is clear that XMR bulls are weak.

Notice that in spite of the under-valuation of July 17, prices are still oscillating within July 16 trade range. If anything, that is bearish. As such it is an opportunity for bears to re-enter from an effort versus results point of view. Immediate target is $50.

Aside from that, XMR is printing lower at the back of increasing trade volumes as of June 26, and July 8 candlesticks demonstrate.

As aforementioned, leading this trade plan is July 8 bear candlestick. Trading volumes are decent at 48k.

Because of the level of participation vis-a-vis recent averages of 10k, any surge past $100 with high trading volumes surpassing 48k shall confirm buyers of early May.