In their quest for complete decentralization, Monero, as a blockchain network, has suffered massive drops in hash rate. That follow several upgrades with the sole objective sidelining ASIC miners. Even so, with this, the system is more reliant on its developers, and that is a weakness. Currently, XMR is down the market cap ranking to 14th.

Futurists reckon that in days ahead, the world will be more secure, decentralized and private. Of the many blockchain projects keen on fronting privacy and anonymity, Monero is the most visible. At just over $1.5 billion, the network is well capitalized and liquid.

To quantify, over $62 million of XMR, Monero’s native currency, were distributed as rewards in 2018 alone. Even so, the figure will drop as more coins are mined and held in private hands.

Note, Monero (XMR) block rewards reduce every day, unlike in Litecoin or Bitcoin networks. However, the law of scarcity will an upgrade revision of the token’s price.

Meanwhile, their goal of starving ASIC miners is a weakness in itself. Although their effort leveling the play field at the expense of the network’s computing power is welcomed, it also jeopardizes the system.

There is developer centralization as their reliance, when hard forking to a new ASIC-resistant version, increase. Talking to CoinDesk about this choice, Diego Salazar said:

“We [also] saw that this was very unsustainable. … It takes a lot to keep [hard forking] again and again for one. For two, it may decentralize mining, but it centralizes in another area. It centralizes on the developers because now there’s much trust in developers to keep hard forking.” 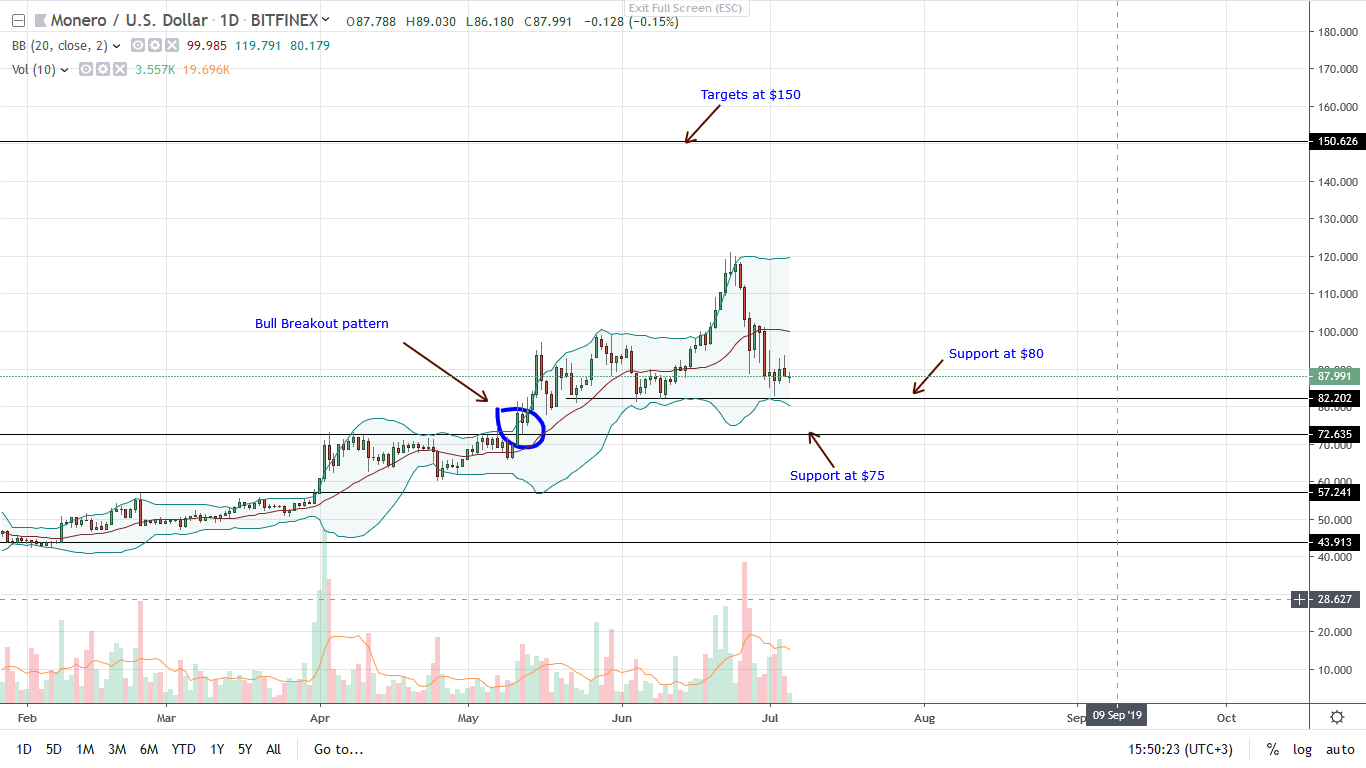 Fluctuating in the last couple of days, XMR is under pressure. However, in light of recent developments, that is not to say bears are in control. Notice that XMR is within a bullish breakout pattern against the USD.

In a retest, XMR prices are back to the $80 support level. Assuming bears press lower, the main support level will be at $75. That is, at April highs and back to an important support previous resistance level of Q1-2019.

Bullish, patience is vital. For trend resumption, bulls must completely reverse losses of June 30. Behind the upsurge must be high trading volumes that will propel prices to $120 or even $150 in the third phase of a classic breakout pattern, the trend continuation stage.

Therefore, anchoring this trade plan is June 26 bear candlestick confirming the double bar bear reversal pattern of June 24-25. With high trade volumes of 52k, the entry of buyers erasing losses of June 30 as aforementioned ought to be with distinctive engagement surpassing 52k of June 26.