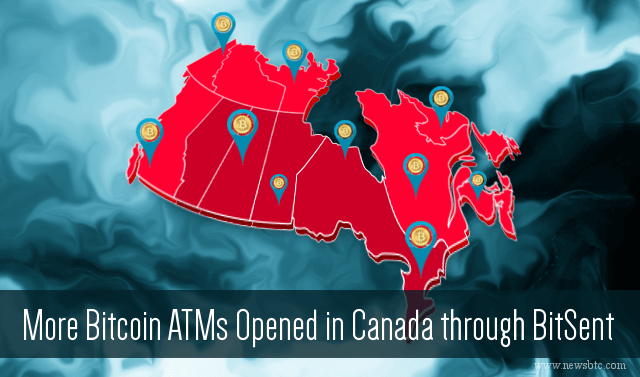 BitSent is one of the first companies to open bitcoin ATMs in Canada and is currently expanding its terminals to locations in Vancouver, Surrey, and Burnaby. Currently, the company has 11 bitcoin ATMs in operation across the country and is hoping to add more terminals internationally.

BitSent is one of the fintech companies based in Ontario, which is considered the “Silicon Valley” or innovation triangle of Canada. This area is home to several new tech startups and is also housing development offices of Blackberry, Microsoft, Google, and Oracle.

What sets the company apart from other bitcoin ATMs is that it makes use of the Lamassu model, which is one of the older technologies. Other companies are using the QuadrigaCX’s SumoPro technology in their bitcoin ATM terminals.

Canada has also adopted a relatively open-minded stance to bitcoin industry developments, similar to the Netherlands and the United Kingdom. BitSent is situated in a region that generates close to $30 billion in revenues from technology-based developments, along with other successful startups such as OpenText, Christie Digital, COMDEV International and Clearpath Robotics.

The Bank of Canada, which is the country’s central bank, has specified that they are not worried about the cryptocurrency replacing their official currency or cash in general. “These are early days and so far digital currencies have not made it to what we call money,” said Governor Stephen Poloz. “We’ve got a ways to go before we need to be thinking about policy implications.”

BitStarz Player Lands $2,459,124 Record Win! Could you be next big winner?
Get 110 USDT Futures Bonus for FREE!
Read our comparison of 50 different crypto casinos. Find out who has most generous bonuses, best UX, knowledgeable customer support and best provably fair games.
Tags: bitcoin ATMbitcoin canadabitcoin debit cardNewsProducts
Tweet123Share196ShareSend
Win up to $1,000,000 in One Spin at CryptoSlots