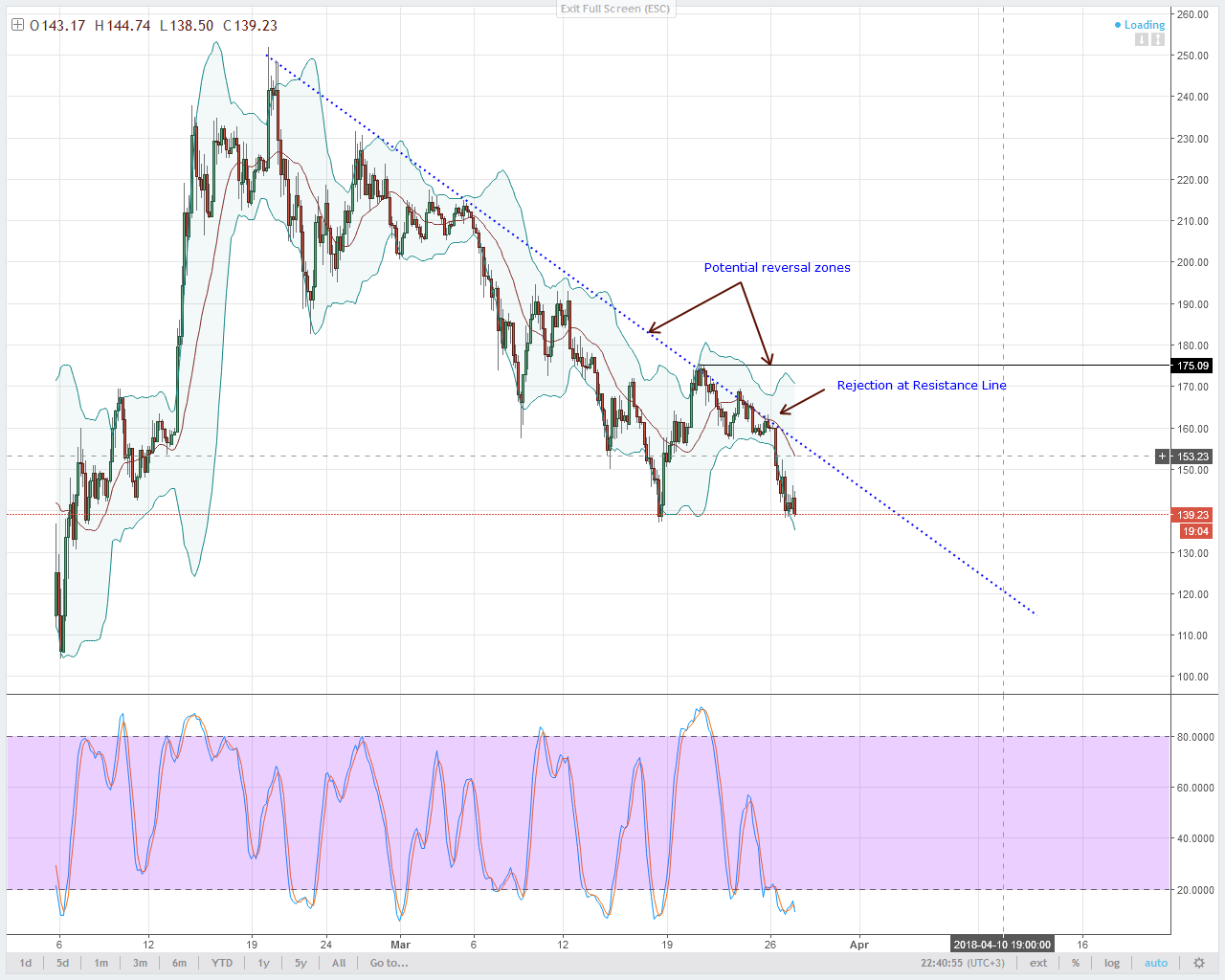 Because of the obvious bad press, LTC took the brunt of the markets in the last 24 hours losing 3.5% according to CoinMarketCap. Of course, that was inevitable and with LitePay closing down after using $50K of Litecoin Foundation’s money, Lee should make due diligence before shilling LTC and giving spineless guarantees to a tax evader.

Apart from that, the altcoins market is relatively calm with EOS back in the green and Lumens ranging in lower time frames. IOTA is not badly off and stable. However, odds of it trading at parity with the USD remain high.

Overly, bears are in charge and like before, every high is another selling opportunity. We estimate sell potentials to be around the major resistance trend line at $0.30 especially if prices trend higher today.

Anyhow, apart from the stochastic buy signal turning from deep the overbought territory in the 4HR chart, there is another bull divergence relative to price action meaning chances of Lumens gaining is high.

Of course, there are pockets of bullish pressure but every attempt of such is met by a deluge of sellers draining momentum lower.

Despite buy pressure, our projection is that IOTA shall most likely trade at parity with the USD in the coming days.

The general trend is bearish and assuming IOTA bulls pick up from current levels-there is a stochastic buy signal, $1.4 and $1.5 would be valid resistance zone where bears can wait for stochastic sell signal to print as they offload this coin.

Right from CoinBase declaring their support for ERC-20 tokens and even hinting listing some of these tokens in their exchanges to news that EOS is offloading 80K ETH, everybody can see that EOS spike.

OK, the crowd funding is still on and being the only gainer at 7% according to CoinMarketCap, sellers should keep off for the time being.

Regardless, $4 remains a feasible target but since prices don’t move in straight lines, waiting for a stochastic sell signal ideally at $7.5 would be perfect. Any close above $6.5 will encourage buyers to jump in creating demand for buyers.

Charlie Lee is turning out to be a spoiler. After all that LitePay hype, the curtains are coming down for a promising company whose owner is a known tax evader.

Besides being not paying taxes, Asare-the chap behind LitePay looks to be very good at embezzling funds. The closure means $50K of LTC Foundation is in ether.

Even if we cannot see adverse effect on LTC, this is negative for the coin and the bad vibe will further erode this coin’s value despite apologies from Lee. In my opinion, sellers should hold tight and aim for $100. After all, the weekly chart bear tide is so strong to counter.

Guys, any NEO appreciation is technically a perfect sell opportunity.

At the moment, NEO seems to be finding support at $50, yes, a round number and a level of significance in the recent past.

But, here the thing, even if bulls pick up from there, sellers should get ready to enter anywhere between $80 and $90 or there about.