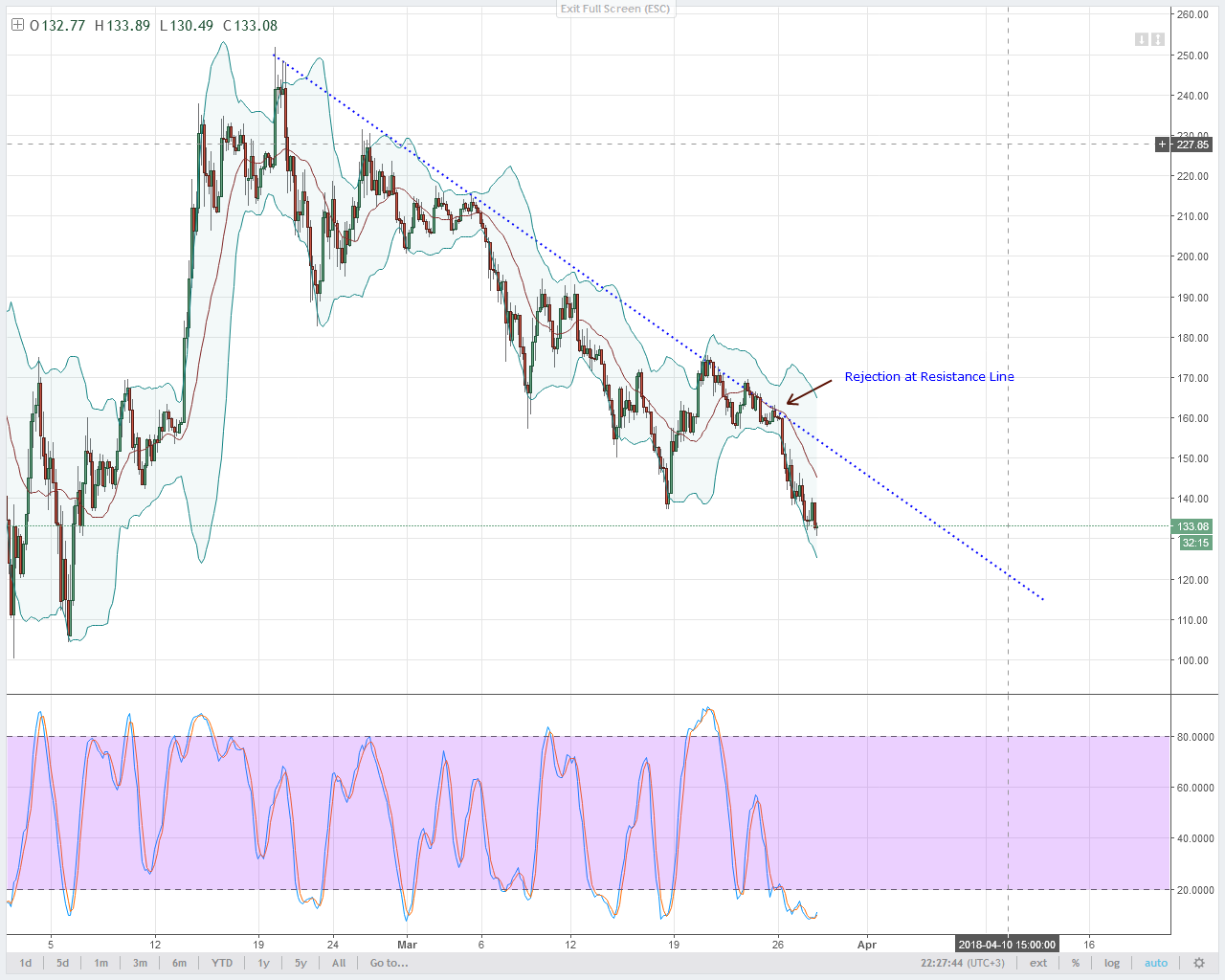 Bitcoin is important in this realm. Despite the slide, there are a couple of impressive projects especially in Lightning Network that is a big plus  if its implementation turns out positive. In the last 7 days, Blockstream has been releasing LApps that would hopefully fast track merchant BTC adoption.

It’s not Bitcoin only but IOTA too is working on its Trinity wallet and giving their users an option on key storage. In contrast, LTC is still receiving negative vibes and following Charlie Lee statements, the erosion continues. Ideally, bears are targeting $100.

To quantify, the last 24HR Stellar Lumens price action has been so disappointing,  down 0.94% and tight.

Yes, we can see a bullish divergence pattern panning out if you compare price action and momentum complete with a stochastic buy smoothing out doubts but even with that, prices are somehow ranging.

According to our position, trading with the trend is the easiest way of being in the blue but technical developments calls for patience until a sell signal turning from overbought territory forms.

Before then, any lower low means sellers are getting closer to their targets at $0.15.

Our initial plan was to look for selling opportunities if IOTA prices move higher. Yes, some pretty nice development on the way and with Trinity Wallet, adopters and traders would have options. Of course this is good news translating to a 0.10% gain in the last 24 hours.

Notwithstanding, bears are in control. Despite stochastics printing a nice buy signal, we shall only advice sellers to wait for shorting opportunities. Those in the trade should target $1 in line with yesterday’s analysis.

A bullish candlestick later and EOS gains are not impressive per say, registering a 4.4% gain according to CoinMarketCap. That is despite prices moving and closing beyond the 20 period MA in our entry chart.

Fundamentally, there are lots of EOS supporters especially now that the token price is rising as per the latest auction.

Even though prices look to be on a recovery, I will consider every high as selling opportunity. Meaning even if bulls breach and close beyond the minor resistance trend line connecting February 17 and March 24 highs, $7.5 will remain a key resistance and a potential liquidation line.

Unlike traditional securities as stocks or indices, cryptos have this element of hype. Charlie Lee abused this hype and the result? A LTC break down and a further 6.5% erosion in the last 24 hours.

This means our first level of support initially at $135 no longer holds and sellers are now aiming for $100 according to our previous trade plans.

In the 4HR chart, prices are negative and with the lack of buy pressure, NEO sellers are basically in the driving seat aiming for $50.

Even though that is ideal, the lack of lower lows and support at around $55 may buoy NEO especially if prices don’t surge lower today.