Ripple Price Analysis: SWIFT Unlikely To Use XRP Even After Corda Trial

After impressive gains, candlestick arrangement supports XRP bulls. To that end we expect bull momentum to build up as uncertainty around SWIFT using XRP after Corda test phase mills.

A level deeper and the excitement around the newfound, indirect partnership between Ripple and SWIFT through R3’s Corda Settler will subside. After a technical review, it is apparent that SWIFT GPI Link is, in fact, a direct competitor or Ripple’s xCurrent with end-to-end tracking capabilities.

While SBI Holdings and Yoshitaka Kitao may be pulling string–SBI Group has investments in both companies, Corda Settler, it appears, will only act like any other “Layer 2” router. A layer that will facilitate cross border payment between these two networks. That is despite their supporting XRP. After all, it can support any other cryptocurrency—even XLM—”Settler will be open to all forms of crypto and traditional assets.” Nothing is exclusive.

The Proof of Concept is in progress, but at the end of the day, both companies will be advancing their solutions. Everything else constant, a scenario where SWIFT GPI Link and SWIFT in particular use XRP is highly unlikely. 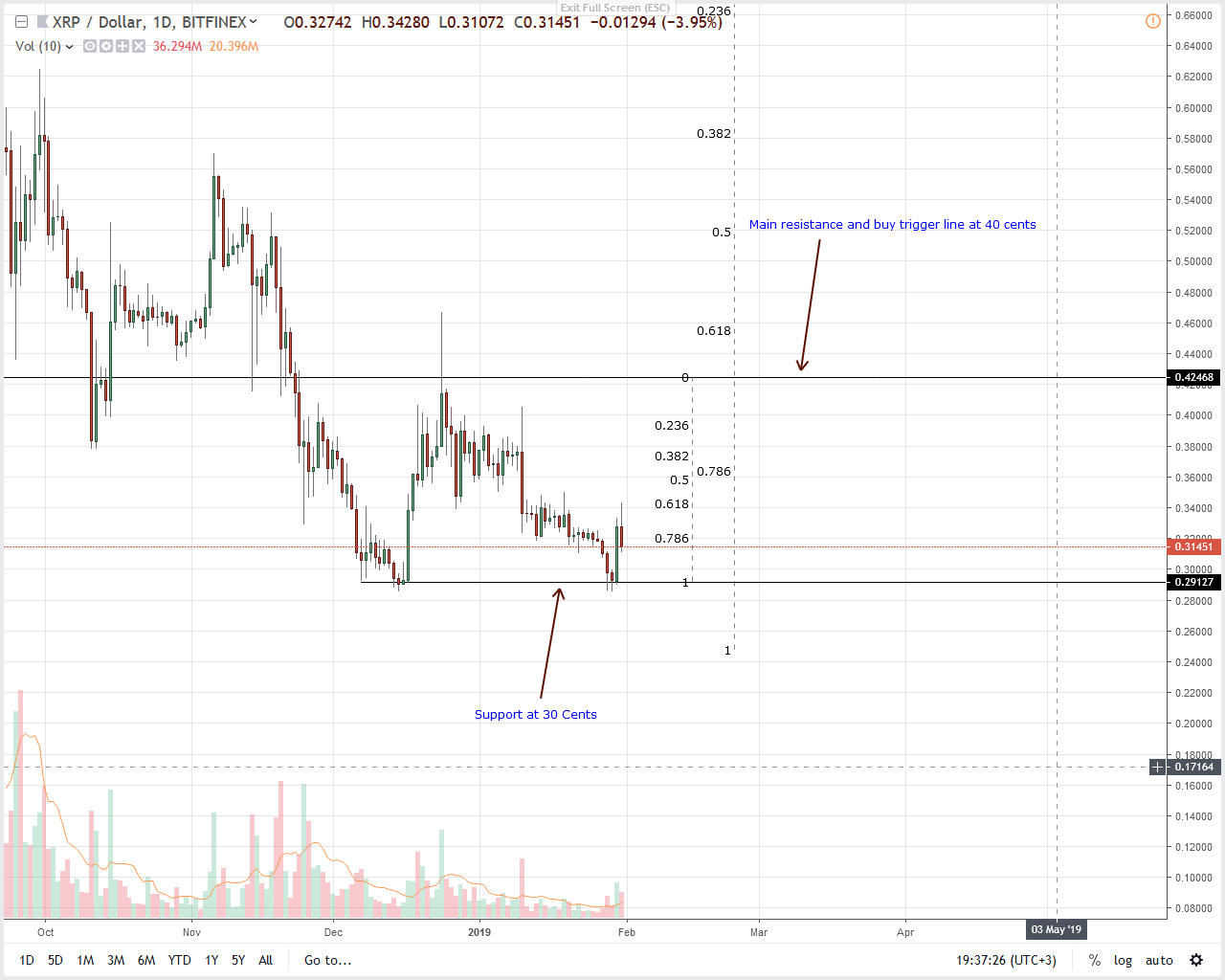 On the charts and XRP prices are cooling off. Despite double-digit gains of Jan 30, there has been no follow through, and prices are overly stable. All the same, we are bullish. Even if there are counter-arguments around XRP, SWIFT, and Corda, candlestick arrangement points to bulls.

Like before, we shall trade in line with our previous XRP/USD trade plans. That means, before we recommend longs, there must be a full close above 34 cents. That’s not all. Confirmations that trigger risk-off long traders must have the support of high trade volumes. These volumes should preferably exceed recent averages of around 17 million.

Only then shall we suggest buys on dips. First modest targets will be at 40 cents and later Dec 2018 highs at 60 cents. Before then, our optimism stems from the double bar bull-reversal pattern printing after yesterday’s upswings.

Although it would have been ideal for yesterday’s volumes to exceed those of Jan 10—83 million, there is a shift of momentum. After a clear high-volume bull bar—49 million versus 17 million averages, there is a propensity for traders to “jump in.”  However, patience is needed. Prices must first rally above 34 cents confirming yesterday’s bull bar preferably with transactional volumes exceeding Jan 28’s 31 million.

Read our comparison of 50 different crypto casinos. Find out who has most generous bonuses, best UX, knowledgeable customer support and best provably fair games.
Tags: CordaRippleswiftxCurrentxrp
Tweet123Share210ShareSend
Win up to $1,000,000 in One Spin at CryptoSlots