SWIFT partnership with Ripple in an arrangement that incorporates xRapid will cause XRP prices to explode. All the same, SWIFT is confident that they are dominant and are not willing to join forces citing numbers. Meanwhile, Ripple (XRP) prices are edging higher and could close above 34 cents in days ahead.

In a proof of concept, SWIFT did link their GPI Link with R3’s Corda Settler—owned in part by SBI Group, the chief agitator for Ripple and XRP. It was understandable that many Ripple supporters were excited that SWIFT was finally ready to fuse with the XRP Ledger and even use XRP for their cross-border service.

No doubt, benefits will flow in thick and fast if they do especially now that Ripple through xRapid has proven that their solutions are superior, cost-cutting and above all fast. It‘s a feature that we get in all DLT projects and something that SWIFT’s Lisa O’Connor, the MD, is not worried about as “numbers speak for themselves.”

In an interview with the popular news churning CNBC’s Crypto Trader, the executive oozed confidence, conveying a subtle message that Ripple has a long way to go before being a primary challenger for the dominant network. 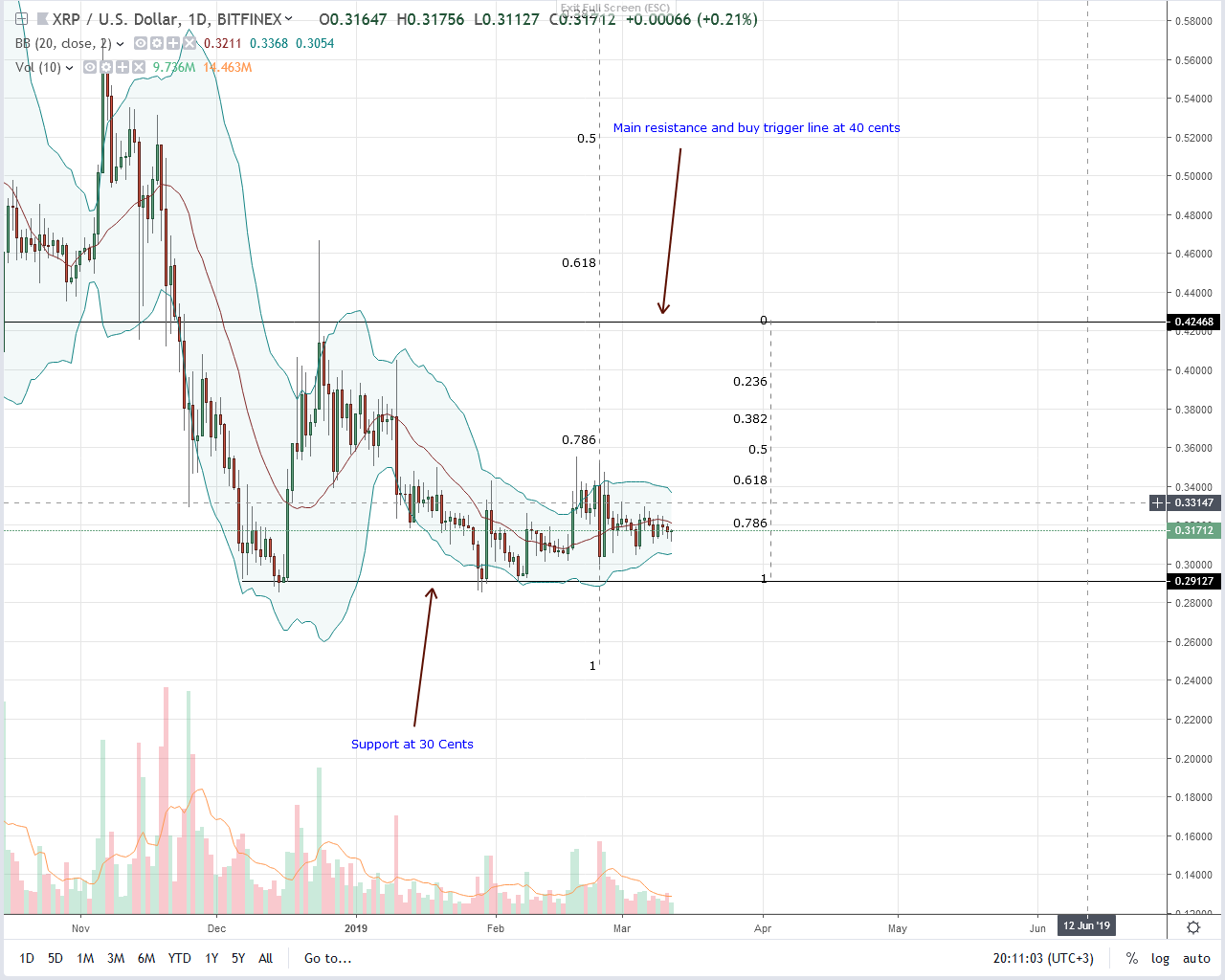 Like it has been with XRP in the last couple of weeks, prices are stagnant. Trading within a tight 4 cents range, the failure of bears to drive prices below 30 cents, our sell trigger and support line is bullish for the third most valuable coin.

Now that prices are in range mode, trading inside Jan 30 high low as participation levels drop, all we expect is a high-volume close above 34 cents. Not only will it catalyze participation but will trigger renewed in XRP as prices gain momentum as prices surge towards 40 cents.

On the other hand, any drop below 30 cents nullifies our Ripple (XRP) trade plan.

Volumes are thin, and despite increasing demand in lower time frames, we need proof of XRP demand. That means a satisfactory close above 34 cents complete with volumes exceeding 14 million and 61 million of Feb 24.

Read our comparison of 50 different crypto casinos. Find out who has most generous bonuses, best UX, knowledgeable customer support and best provably fair games.
Tags: Rippleswiftxrp
Tweet123Share214ShareSend
Win up to $1,000,000 in One Spin at CryptoSlots