Ripple (XRP) Add 4.5 Percent But is it Overpriced?

At third, Ripple (XRP) prices are steady, bouncing off primary support at 30 cents. Even so, commentators say there is an overvaluation despite institutional, High net worth investors channeling their funds in Q1 2019.

True, the space is sophisticated and with a mix of start-ups, analysts, supporters, developers and speculators, it may appear an arduous task to navigate. At one-point Ripple Inc, the independent company that owns a majority of XRP, always have to explain their position. While it is clear that institutions are flowing in, purchasing the coin in droves, critics are never yielding, and on Ripple Inc case regardless of good news.

“While the price of XRP decreased, the average XRP daily volume was $595.28 million which is on par with XRP daily volume from Q4 2018. Besides, XRP’s correlation with other top digital assets remained consistently high throughout the quarter.”

An observer is of the view that the world’s third most liquid coin is over-priced at spot rates. As it is, Ripple (XRP) is trading at 30 cents against the USD. However, he reckons that if XRP is indeed a settlement coin, a liquidity provider that businesses would use for converting fiat with no incentive of holding then the currency ought to trade below one cent. That is if the coin would dominate, first the multi-trillion FX market which is the world’s most liquid market.

“Why XRP is highly overpriced? Assuming it is no. 1 use case is as a settlement currency, and no one would want to hold on to XRP longer than necessary to reduce price risk, even a price of 0,0043 USD/XRP would be high enough to settle the entire FX volume of $5.1 trillion per day.” 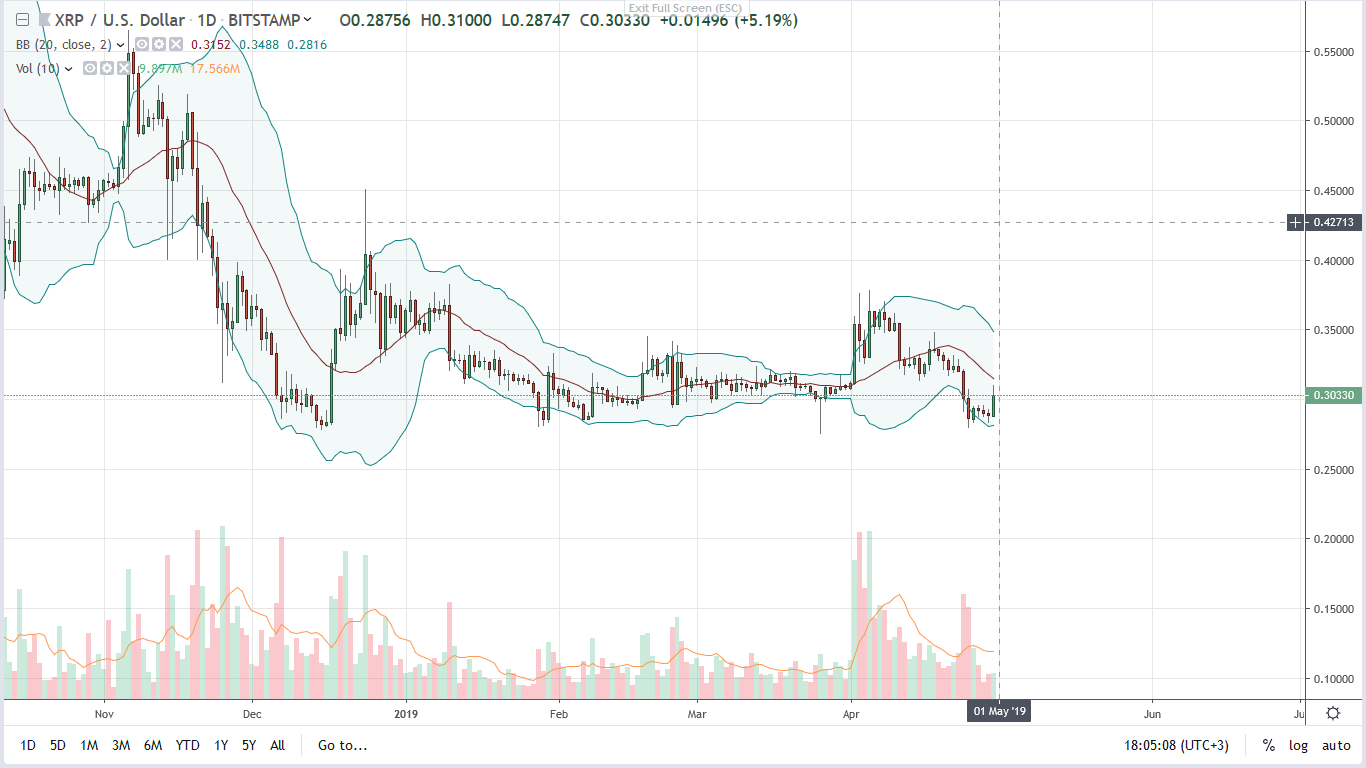 After last week’s meltdown, Ripple (XRP) may be back to its feet. Although it is not as steady and firm with sell pressure in smaller time frames, the fact that it did snap back to trend, is bullish.

Note that our initial stance will not change. Despite the meltdown, we are bullish on the coin, and the correction of Apr-25 close below the lower BB and undervaluation off the main support line affirms buyers of Jan 30.

Regardless, we shall be neutral until after prices reverse losses of Apr-24-25 complete with large transaction volumes above 34 cents in a trend resumption phase. Before then, our laid out XRP/USD trade plan is correct.

Our reference bar in light of recent activities is Apr-25. It has high volumes of 34 million against 19 million. Despite today’s bull bar, we need above average volumes—exceeding 19 million– to drive prices above Apr-24 highs at 32 cents towards 34 cents before risk-off traders load up on dips. Targets are at 40 cents and later 60 cents of Dec 2018.