The decentralization argument will continue as long as there are ardent supporters. Ripple Inc executives maintain their ledger is decentralized, but critics are not buying it. Regardless, Ripple (XRP) buyers are in control and likely to close higher by close of this week.

Like Bitcoin, Ripple is a third-party free remittance service. In a recent tweet, Pomp said Bitcoin as the first global payment option was faster and cheaper than competitors. Well, to some degree, that is true. Bitcoin may have a slower throughput than centralized alternatives but compensating that design choice is security, autonomy and most importantly, cost. MasterCard and Visa as competitors are way too expensive despite processing more transactions.

While Pomp has is opinions, tests reveal that Ripple as an alternative for banks and individuals is comparatively cheaper and faster. Besides the speed, their ledger, according to David Schwartz, is highly decentralized and through a proof of correctness system, most validators are under the control of third parties. Even so, Ripple Inc—an independent company owns a majority of XRP.

All the same, the decentralization argument will continue as long as Ripple Inc has control over the majority of XRP and Bitcoin hash rate be under the control of few mining pools. The main differentiator is the way Ripple Inc is forging on. By utilizing Codius and InterLedger Protocol, Forte will receive $100 million from Ripple as they seek to make inroads into the multi-billion-dollar gaming industry. 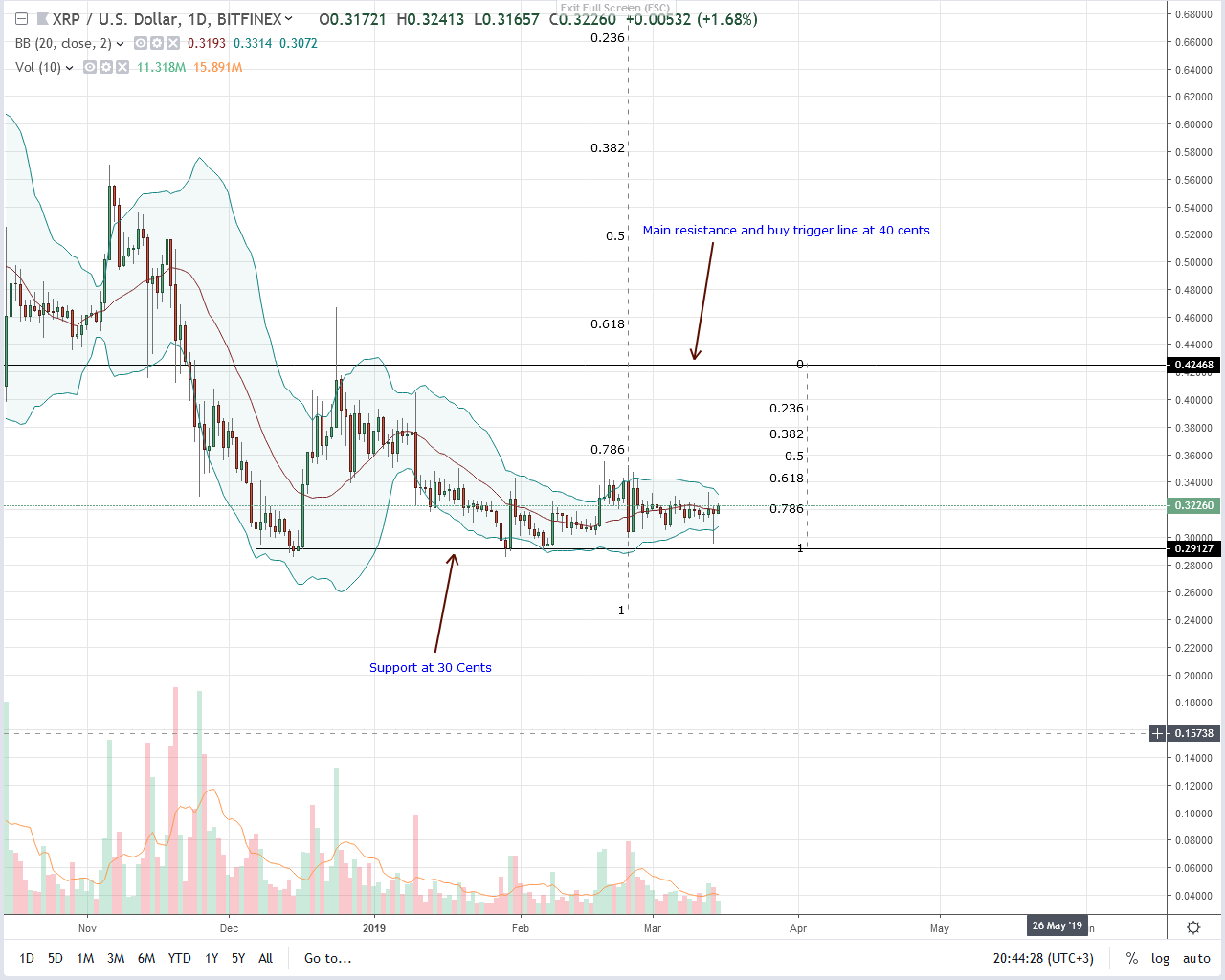 Although Ripple (XRP) gains are miniscule, there are improvements. Already, the path of least resistance is evident. Because bulls have the upper hand, we expect demand to drive prices above 34 cents.

As mentioned in our last XRP/USD trade plans, it is after prices close above this buy trigger line or the 61.8 percent Fibonacci retracement level is when incoming Ripple (XRP) demand is likely to drive prices towards 40 cents as momentum build up.

So far, inactivity means prices are trading within a tight 4 cents trade range with firm supports at 30 cents. Also, with yesterday’s pin bar and failure of bears to drive prices lower, a breakout trade is highly likely.

Ripple (XRP) prices are calm. From an effort versus results analysis, price bursts above 34 cents is on the cards. Accompanying this gain should be high transaction volumes that must exceed 20 million and 61 million of Feb 24.